LITTLE ROCK — The Congressional Award is the highest honor the U.S. Congress bestows on youth civilians — and several Arkansas 4-H members are among the most recent recipients. 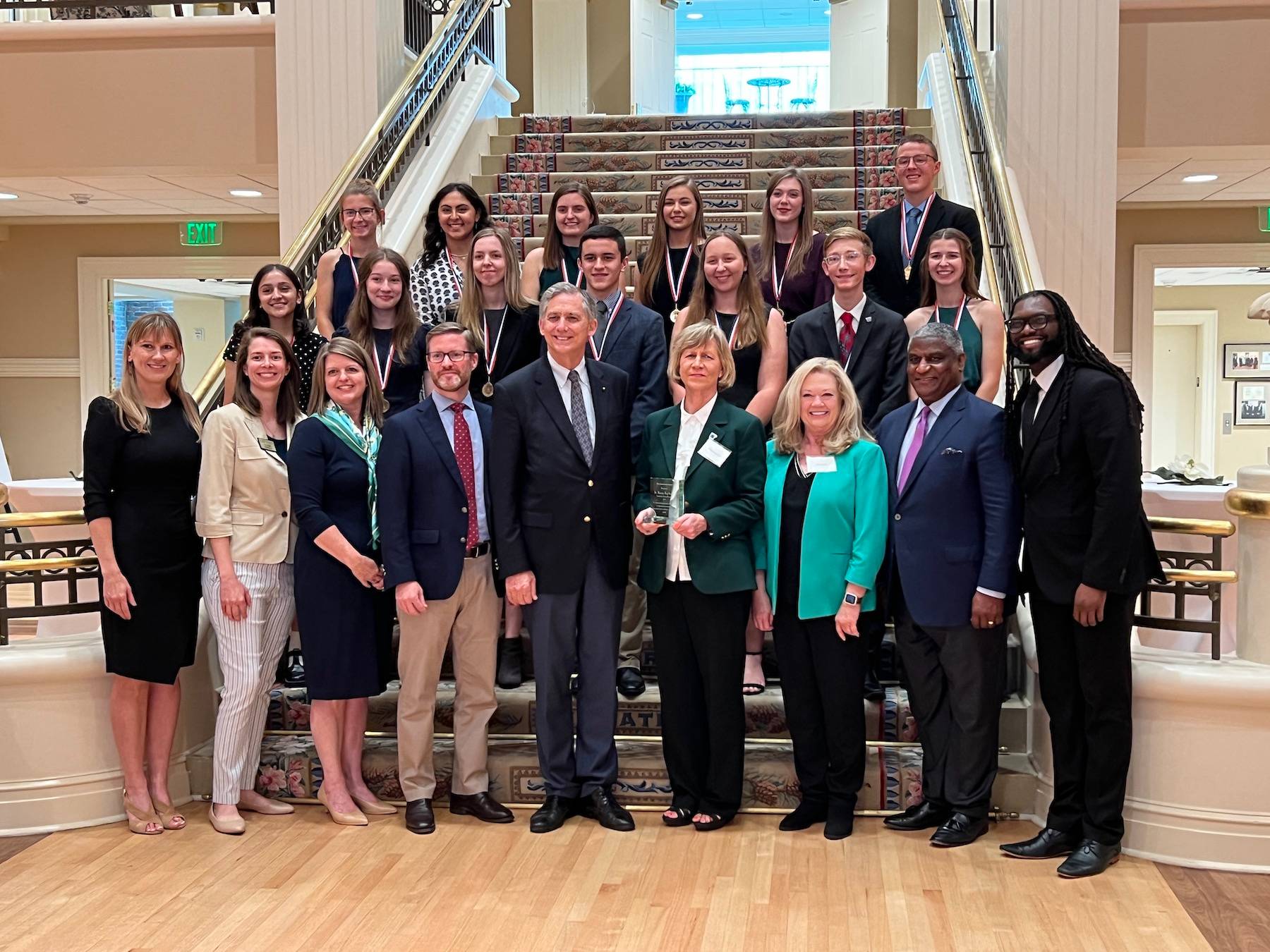 HONOREES — Arkansas 4-Hers receive the Congressional Medal on Sept. 24 in a statewide ceremony at the Arkansas Governor's Mansion.  UADA Photo/Tracy Courage

Twenty 4-H members were honored at a statewide ceremony at the Arkansas Governor’s Mansion on Sept. 24, with special guests Gov. Asa Hutchinson, U.S. Representative French Hill and Rodney Slater, former U.S. transportation secretary who serves as vice chair of the Congressional Award Board.

A ceremony for Congressional Award gold medal recipients is held in Washington, D.C., where the award is presented by members of the Senate and House of Representatives. The Arkansas statewide ceremony honored all Arkansas youth who earned the award since the last ceremony in 2018. Arkansas 4-H members comprised a majority of the recipients, and several of them earned multiple medals and honors.

Participants earn bronze, silver and gold certificates and medals based on achievement in four areas: voluntary public service, personal development, physical fitness, and exploration or expedition. For the gold medal — the highest level — participants complete a minimum of 400 hours of voluntary public service, 200 hours of personal development, 200 hours of physical fitness, and a five-day expedition or exploration.

“This program is all about seeing something in your mind’s eye and working to make it real and having mentors and family to help you do just that,” Slater said.

Martha Ray Sartor, former associate vice president for 4-H Development with the University of Arkansas System Division of Agriculture, received the 2022 Inspiration Award for her work as a Congressional Award advisor. With her leadership, more than 24 youth have achieved the Congressional Medal.

“I have developed the dedication and discipline to not only establish goals, but to record the results, and see them to completion,” he said. “It has given me confidence and perseverance to serve as a team player through community service and commitment to others.”

“By participating in the Congressional Award Program, I have learned the importance of record keeping and goal setting. Through goal setting, I see that no matter how large the end result may be, one can work at it for a given period of time and achieve anything you set your mind to. Most importantly, I have learned that there are opportunities every day to serve others in my community.”

Keeping a 4-H record book, which requires youth to keep detailed records of their project activities, community service and leadership activities, helped many of the recipients.

“The recordkeeping for the Congressional Award was easy because of 4-H,” said Janna Morse of Washington County, a freshman global studies major at the University of Arkansas. One of the highlights of working toward the Congressional Award, she said, was the exploration requirement. Morse planned and completed a 10-day trip to Iceland.

Her sister, Etana Morse, 16, also received the gold medal and was recognized as a STEM Star for the 200 hours of personal development she spent learning about the automotive industry by working at a Fayetteville car dealership.

More information about the Congressional Awards is available at www.congressionalaward.org

Media Contact: Tracy Courage
Director of Communications-Extension
U of A System Division of Agriculture
501-658-2044