FAYETTEVILLE, Ark. — The Arkansas Agricultural Experiment Station is getting a boost in research on consumer behavior with Brandon McFadden as the new Tyson Endowed Chair in Food Policy Economics in the department of agricultural economics and agribusiness. 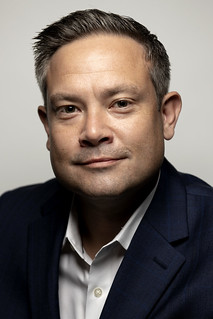 AG ECONOMIST — Brandon McFadden started work in August as the new Tyson Endowed Chair in Food Policy Economics. (U of A System Division of Ag photo by Fred Miller)

The endowed position was established in 2006 to help attract researchers who are nationally recognized in their field. McFadden joined the experiment station, the research arm of the University of Arkansas System Division of Agriculture, in August.

“Dr. McFadden is currently one of the most prolific agricultural economists in the country working on consumer economics and food policy issues,” said John Anderson, professor and head of the agricultural economics and agribusiness department. “He has a well-deserved reputation for developing creative approaches to addressing timely and relevant problems related to food markets, consumer attitudes toward food and agriculture, and policy developments affecting the food and ag sector.”

Anderson, who is also the director of the Fryar Price Risk Management Center of Excellence within the University of Arkansas System, went on to say that McFadden is an “outstanding communicator and takes great pains to make sure that the results of his work make it into the hands of relevant stakeholders.”

Another big project is a $10 million USDA-National Institute of Food and Agriculture grant to study sustainable aquaculture production of fish with high Omega-3 levels using hemp as a novel feed additive. That project includes partners at historically Black colleges and universities in Ohio and Kentucky, and a Native American tribal college in Wisconsin.

His work is not confined to the borders of the United States either. Working with a student from Tanzania, Pius Kilasy, he helped identify knowledge gaps on vitamin deficiency among women in Tanzania who are of childbearing age. The paper on the study is currently in review for publication. The information obtained from the study, McFadden said, could help other countries with a high prevalence of micronutrient deficiencies.

“One interesting thing we found is 75 percent were aware of vitamin A and iron deficiency, but only about half were aware of zinc,” McFadden said. “Now you know as a country there is a much larger lack of knowledge of zinc and all three of those were mentioned as nutrients of importance in a publication released by Tanzania concerning micronutrient deficiency.”

“I essentially do marketing research just like you would for a firm, but to increase the well-being of consumers instead of firm profits,” McFadden said. “I look for societal problems that could use marketing techniques to identify possible solutions.”

Another grant-funded study McFadden will soon begin involves consumer behavior research on crops grown with electronic waves as a pesticide control method. The experiment is being conducted at Oregon State University.

McFadden’s work as an agricultural economist focuses on consumer knowledge — and confusion — in emerging markets to estimate consumer demand and what consumers value in those emerging markets. His research provides information that can help farmers, processors and manufacturers.

McFadden will also be teaching a graduate level class next year through the Dale Bumpers College of Agricultural, Food and Life Sciences.

“In addition to his expertise in research and outreach, Dr. McFadden is an outstanding teacher, not only because of his subject matter expertise but also because of his exceptional ability to help students see the practical application and real-world value of complex economic concepts,” Anderson added. “We are excited to have Dr. McFadden joining the department and we look forward to seeing him carry on the tradition of world class scholarship that is associated with the Tyson Chair position."