FERNDALE, Ark. — Many former 4-H members remain involved with the youth development program long after they age out, ensuring new generations benefit from the program’s hands-on learning opportunities. On Aug. 6, the Arkansas 4-H Alumni Association honored Barbara Nelson for 40 years of service to the organization, which supports the Natural State’s 4-H programs. 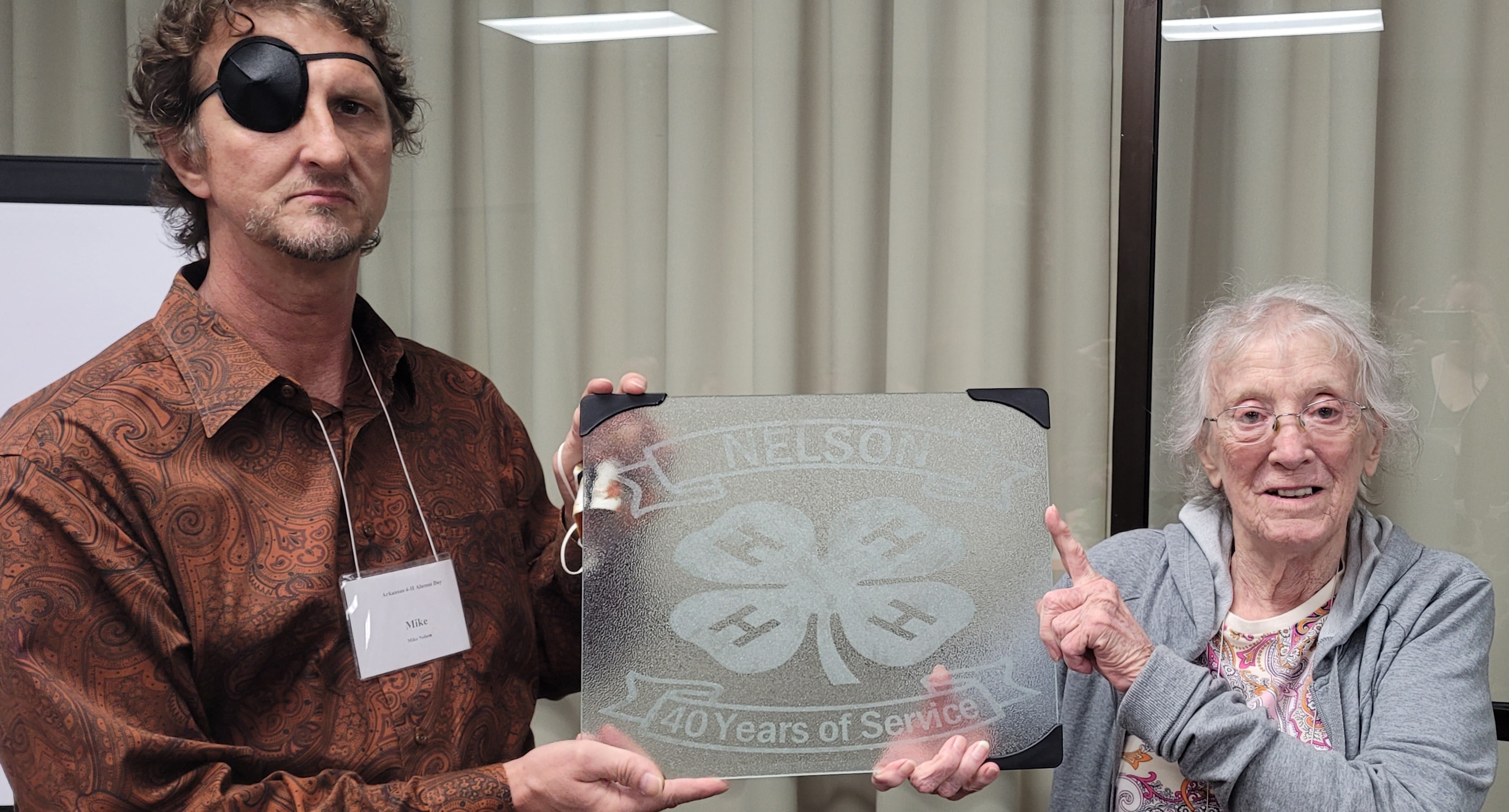 40 YEARS OF SERVICE — On Aug. 6, the Arkansas 4-H Alumni Association honored Barbara Nelson, pictured with her son Mike, for her 40 years of service to the organization, which supports 4-H programs in the state through scholarships, an innovative grant program, and other fundraising projects.

Nelson, 79, joined the Arkansas 4-H Alumni Association when it was established in 1982. She was elected as chair of the association in 1985, only the second person to hold the position, and served in the role for eight years. Nelson said that after seeing the impact 4-H had on three generations of her family, she knew she wanted to give back to the program.

“Having seen my brother and sisters and what they accomplished, the projects that my mom and dad had us do, and after watching my kids grow up in it, to me it was quite worth it to give alumni another way to help 4-Hers,” Nelson said.

“I’ve always felt like 4-H has been well worth any time anybody puts in it, and it’s just good for the kids,” she said. “You get to see them grow up, and you get to see them start off scared to death to give a presentation, but in two years, they’re standing up and telling you anything they want to tell you.”

The Alumni Association supports 4-H and gives former 4-H members the opportunity to stay involved in the program. They provide two $500 scholarships each year to graduating 4-H members, and their innovative grant program provides up to $200 to four clubs each year for community projects. The association also sponsors the brick 4-H Memory Walk at the C.A. Vines Arkansas 4-H Center, along with other projects, including their support of the Arkansas Hospitality Suite at the National 4-H Congress.

Ettamarie Belden, current president of the Arkansas 4-H Alumni Association, said Nelson’s history as a teacher and passion for 4-H have made her an important source of support.

“She’s the best,” Belden said. “She has so much experience, and she’s so dedicated. She’s just very community oriented, somebody who could always be depended on. She’s the kind of teacher that you want.”

4-H runs in the family

Nelson was a member of the New Providence-Turley 4-H club in the Lodge Corner community of Arkansas County starting in the late 1940s, where she worked on clothing, dairy cattle and “personal improvement” projects, such as public speaking. Her mother, Gladys Kennedy, served as the main 4-H leader, and Nelson’s brother and sisters were also involved.

After leaving Arkansas for a few years while she and her husband were stationed at different Army bases, Nelson earned a Bachelor’s in Education from Henderson State Teacher’s College in 1964. This led to a 50-year career in public education. She worked as a schoolteacher from 1965 to 1995, served five years on the DeWitt School Board and worked for 18 years as an adjunct instructor at Phillips County Community College, now part of the University of Arkansas System. She also earned her Master’s in Education from the University of Arkansas in 1978.

In 1973, Nelson’s sons Ken and Mike became interested in 4-H, and the family joined the Eager Beavers 4-H club in Fordyce, where Nelson became a 4-H leader. The family moved to Watson in 1977, where they helped start one of the first integrated 4-H club in the state, the Warriors.

“We had some really good 4-Hers,” Nelson said. “Everybody cooperated with everybody else, and it was a fun time.”

Mike and Ken both went on to earn state and national recognition for 4-H achievements. Nelson was a 4-H club leader for 35 years for her local “Spirit of 76” club in Arkansas County. She has eight grandchildren and four great-grandchildren. Her grandchildren participated in poultry, shooting sports, bicycle safety and other local 4-H programs. Her oldest grandson, W. Trevor Nelson, was a county officer, a state Teen Leader, and a state and national winner for his project “Rice for Ducks,” for which he received an achievement plaque from then U.S. President George W. Bush. Mike Nelson said the great-grandchildren will all be “encouraged to join and participate in 4-H when they are old enough.”

Nelson’s family history with 4-H also includes her father, Holland Leroy “HL” Kennedy. Mike Nelson said his family has a record of Kennedy participating in 4-H starting in 1925 at age 14, just 17 years after the start of 4-H club work in Arkansas in 1908. Kennedy received a 75-year distinction award from the alumni association for his lifelong support of the program.

Decades of service and support

Nelson said she “would not change a thing” about her years of service to the alumni association and the 4-H program, and that she was “flabbergasted” when she was recognized in
August.

“I never thought about it being 40 years with the alumni association,” she said. “I just can’t believe I’m quite that old yet. But it’s time well spent, and I wouldn’t change a bit of it.”

John Thomas, managing director of the Arkansas 4-H Foundation, said the support of alumni like Nelson is crucial to the state’s 4-H program.

“Arkansas 4-H alumni are an invaluable resource to the continued success of the 4-H program,” Thomas said. “Barbara is a great example of that. We are so grateful for her and her legacy of giving back to the next generation of Arkansas 4-H youth.”