SAN ANTONIO — Straight out of high school, David Caldwell didn’t envision a career in poultry science, yet he has been honored by the Poultry Science Association as a Fellow for his contributions to the field of poultry science and service to the organization.

The Texas native grew up in the small farming community of Taylor, where he was involved in FFA. Caldwell had broilers and layers but wasn’t convinced that poultry science was his future. 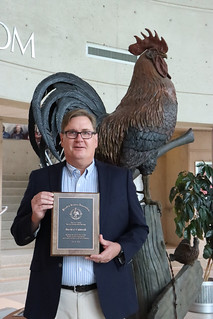 FELLOWSHIP — David Caldwell, department head of the poultry science department and director for the Center of Excellence for Poultry Science, was awarded a Fellowship by the Poultry Science Association in July 2022..

In his second semester at Texas A&M, Caldwell discovered the job placement rate for his chosen major was not very high, so he decided to switch it up.

“I walked across campus to where the agriculture majors were housed, and that afternoon I became a poultry science major,” Caldwell said. “It stuck. I’ve been here ever since.”

After graduating with his B.S. in poultry science at Texas A&M in 1991, Caldwell pursued his graduate degrees.

“When I was working in the lab as an undergraduate and graduate student, I developed an appreciation and a keen interest in research,” Caldwell said. “That really drove me down the path toward academia and ultimately becoming a faculty member.”

He graduated from Texas A&M in 1997 with his M.S. and Ph.D. in veterinary microbiology. Right after graduation, Caldwell joined the faculty of the Department of Poultry Science at his alma mater.

“It was really nerve-wracking to join as an assistant professor, but I enjoyed the fit,” Caldwell said. “I enjoyed teaching, mentoring graduate students and conducting research that carried impact for our industry stakeholders.”

PSA a resource for success

The Poultry Science Association has played a large role in Caldwell’s professional development and career success. He joined the organization as a college student in 1991, and it has been a resource for him ever since.

“In 2008 I received what was then called the Land O’ Lakes/Purina Mills Teaching Award from the Poultry Science Association,” Caldwell said. “Teaching was always very important to my career. I’ll never forget being recognized with that award.”

Caldwell also served PSA as an at-large director between 2009 and 2012, was elected to the Executive Board in 2013 and served as president of the organization in 2015-2016. On top of all his accomplishments and service in PSA, Caldwell was inducted as a PSA Fellow at the 2022 Annual Meeting in July.

“The highest distinction that is given to a Poultry Science Association member is to be named a PSA Fellow,” said Karen Schwean-Lardner, 2022 Poultry Science Association president. “David Caldwell has contributed so much to this association, in his time given to serve on the Board of Directors, committee assignments and much more. He is also an outstanding scientist and is committed to student teaching throughout his career.”

Caldwell said he was surprised by the award.

“It wasn’t until I attended the PSA Annual Meeting in 1995 in Canada that I noticed Fellows being inducted,” Caldwell said. “I could see how much it meant to those individuals being inducted. It’s nothing I would have ever expected, but I am very honored. It means a great deal to me.”

“We are thrilled for Dr. Caldwell to be recognized by PSA. Dr. Caldwell has contributed enormously to the poultry industry during his career and has provided exemplary leadership to the Center of Excellence for Poultry Science,” said Jean-Francois Meullenet, associate vice president for agriculture for the University of Arkansas System Division of Agriculture, director of the Arkansas Agricultural Experiment Station and interim dean for the Dale Bumpers College of Agricultural, Food and Life Sciences. “I can’t think of anyone more deserving of this honor. Congratulations to him!”

Established in 1908, the Poultry Science Association is a professional organization consisting of approximately 2,000 educators, scientists, extension specialists, industry researchers, administrators, producers, and college students who are committed to advancing the poultry industry.