FAYETTEVILLE, Ark. — The little things living in a calf’s nose could be key to combating bovine respiratory disease, the single most costly illness affecting the beef industry. 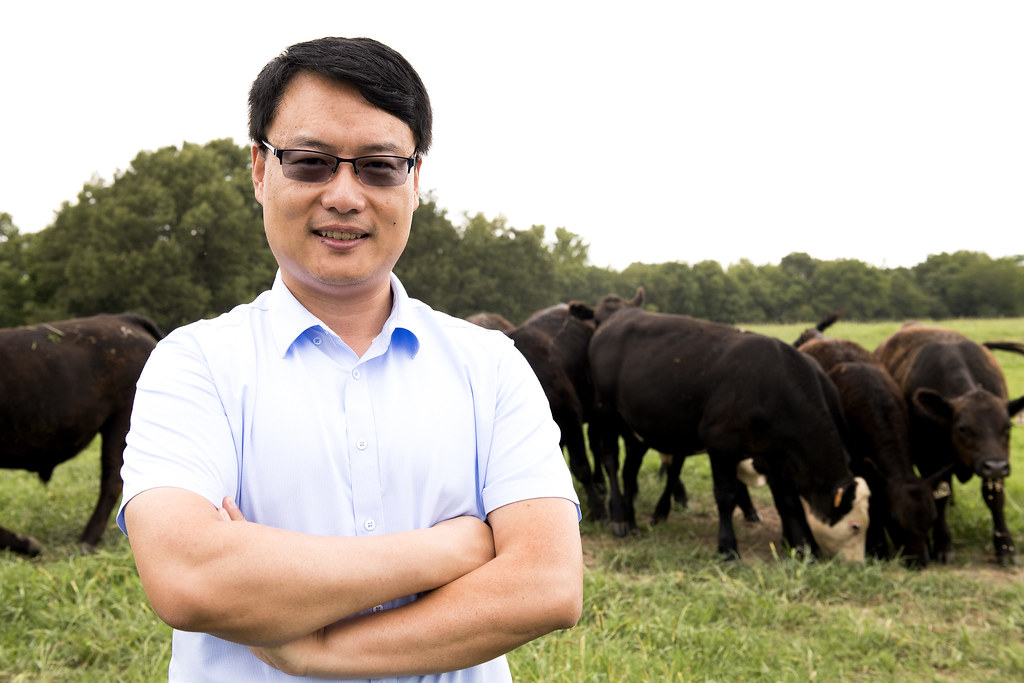 MICROBIOMES — Jiangchao Zhao, associate professor of animal science, conducts research on the bovine respiratory microcbiome with an eye toward preventing or mitigating bovine respiratory disease in weaned calves. (U of A System Division of Agriculture photo by Fred Miller)

Jiangchao Zhao, associate professor of animal science at the Arkansas Agricultural Experiment Station, uses next-generation sequencing to identify the microorganisms populating the bovine nasal cavities, known as the respiratory microbiome. He has correlated those results with the presence or absence of bovine respiratory disease, also known as BRD, in calves to discover which microbiota benefit the animal’s health and which ones impair it.

The Agricultural Experiment Station is the research arm of the University of Arkansas System Division of Agriculture.

Zhao said BRD costs the beef industry as much as $2 billion per year, including animal death, reduction in feed efficiency and other ill effects, as well as for prevention and treatment costs. U.S. feedlots alone see up to $900 million in annual losses from BRD, according to an article, “Economic Effects of Bovine Respiratory Disease,” published in the Journal of Animal Science (https://bit.ly/3SWJRLg).

Feedlots, especially for calves that go straight there after weaning, present the greatest risk to the animals for acquiring BRD, Zhao said. More than 90 percent of large feedlots in the U.S. reported BRD as the most frequent disease, according to a report from the USDA’s National Animal Health Monitoring System in Fort Collins, Colorado.

“The calves are subjected to significant stress, going from weaning to shipping to the feedlot,” Zhao said. “Commingling with other animals adds to the risk. The first month at the feedlot is the highest period of vulnerability to the disease.”

Backgrounded calves, those that continue on pasture at a stocker operation after weaning, are less susceptible to BRD, Zhao said, but not immune. The animals are still under stress during transportation from the cow-calf farm to the backgrounding farm, which lowers their immune response when exposed to the disease.

Zhao said that backgrounding presents less stress and less exposure to BRD than going directly to a feedlot. “It’s a good practice. The calves develop healthier immune systems and are bigger and stronger when they finally go to the feedlot.”

However, more than half of U.S. calves go directly to feedlots after weaning, he said.

Microbiomes are colonies of bacteria — good, bad or indifferent — that occupy cavities in animal bodies. Zhao and his research team investigate these microbiota in agricultural animals to determine how the populations affect the animals’ health.

In this study, funded by a four-year $400,000 grant from USDA’s National Institute of Food and Agriculture, Zhao is identifying microbiota species that correlate with occurrences of bovine respiratory disease in each animal.

“We’re working to understand the mechanisms of causation for the disease,” Zhao said.

BRD is almost always a co-infection, he said. A calf picks up a virus — not unlike humans catching a cold or flu — and then a pathogenic bacteria takes advantage of the animal’s compromised immune system.

“When you know what causes the illness,” Zhao said, “then you have a target for intervention.”

Using the next-generation sequencing, Zhao has been observing which genes are transcribed during a BRD infection, including genes both in the pathogen and in the animal’s immune system.

This study is combined with culturomics, Zhao said, to isolate both good and bad bugs from the bovine respiratory system. Microbiome samples from the swabs are spread onto petri dishes with different growth media and gases to simulate the respiratory system environment — a process known as “plating.” Then the bacterial colonies on the plates are analyzed for identification and characterization.

Zhao’s lab team has identified several potential probiotics based on big data analysis. Samantha Howe, a Ph.D. student in Zhao’s lab, was able to culture some of the bacteria. “She is working to verify the beneficial effects of these bugs to see if they can kill or inhibit the growth of pathogens,” Zhao said.

In follow up research, Zhao will feed those “good” bacteria back to the calves to see if they are able to stop or reverse a BRD infection.

This research could lead to the development of probiotic products that use the good bacteria as an intervention to cure or prevent BRD, Zhao said. Such products can be safer and more effective than antibiotics, to which bacteria can build resistance.

In related research, Zhao has developed an easier method for detecting BRD or the pathogens that can lead to the disease.

The standard method for detecting BRD in sick or vulnerable cattle is to swab the nasopharyngeal cavity with a rhinostatics nasal swab. Zhao said the bovine nasopharyngeal cavity, the location of the respiratory microbiome, is very deep, reaching the entire length of the animal’s head to the top of the esophagus. Swabbing for a sample is a difficult procedure, and the cattle don’t much like it, either.

Zhao investigated the use of shorter swabs to sample the front of the calves’ nasal passage — the area immediately inside the nose. He was able to demonstrate that this easier method is as accurate as the standard method while causing far less discomfort to the animal. He is developing a test kit that beef producers can use in the field to collect samples that can be submitted to a lab for analysis.

In a second phase of the research, he wants to develop a self-test kit that uses a system similar to the now-familiar home test kits for COVID-19. After sampling, the swab is smeared on a prepared test paper that will indicate whether the animal is BRD positive or negative.

Such a test may be used to determine if a calf has a higher concentration of either the “bad” bacteria that may lead to BRD infection or of the “good” bacteria that help prevent it.

Being able to identify which animals are at higher or lower risk of infection means veterinarians can focus intervention on fewer animals, saving money and lowering the risk of developing antibiotic-resistant bacteria.