“Even with favorable commodity prices, the cost environment we’re faced with could weaken farm balance sheets after this crop year. If that turns out to be true, we could see the value of farmland stabilize." -- Scott Stiles, extension economist. 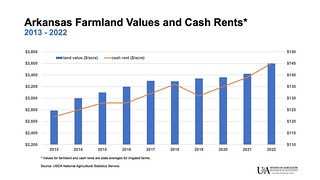 UPWARD — Chart showing rise of Arkansas farmland values and cash rents since 2013. (U of A System Division of Agriculture image by Scott Stiles).

Scott Stiles, extension economist for the University of Arkansas System Division of Agriculture, said farmland values in Arkansas have increased four consecutive years, though the rise between the 2021 report and this year’s wasn’t as high as the national average.

“Percentagewise, the year-to-year increase in 2022 Arkansas farmland values — up 4.7 percent — is the largest we’ve seen since 2019,” he said. “This above-average increase is largely the result of many factors: high inflation and strong commodity prices.”

“The war in Ukraine and production shortfalls this year in the southern Plains, Europe and South America, have all provided support to grain and cotton prices,” he said.

There’s an additional factor: with some of the increase driven “by outside interest from investors, that see farmland as a hedge against inflation. With mortgage rates increasing, that too may have accelerated some real estate buying,” Stiles said, adding that a downturn in the equity markets this year could also be viewed as supportive to farmland values, as investors shifted money to non-Wall Street assets.

"Like land values, cash rents in Arkansas have been trending higher, increasing 4.3 percent over the past year and nearly 11 percent since 2019," he said. In a cash-rent scenario, a farmer would lease land to produce a crop and pay a fixed cash rent per acre to the landowner.

The 2022 state average cash rent for irrigated farms is $145 per acre.

“North of I-40, it is not uncommon to see cash rents of $180 per acre,” Stiles said. “Looking at specific counties within NASS' “Cash Rents” survey, Clay and Craighead counties were at the upper end of cash rents in the state with an average of $175 and $172 per acre respectively,” he said. “Mississippi and Poinsett counties also had higher cash rents than the state average.”

South of I-40, the above-average cash rents “tend to be in the southeast corner of the state, with Ashley, Chicot, Desha and Jefferson averaging close to $152 per acre this year,” Stiles said.

Cash rents can be pushed higher on land that is irrigated, precision leveled, and has the ability to grow a diverse mix of crops. Other factors might include location.

“Sometimes you see competitive bidding for quality farms push cash rents up to $200 per acre or more,” Stiles said.

Stiles said that current commodity prices would normally ensure a profit for farmers, but it remains to be seen what impact this summer’s weather had on yields.

“From the start, we knew this year would be one of the most, if not the most, expensive.  The added irrigation costs this year compounded the situation,” he said.

“Even with favorable commodity prices, the cost environment we’re faced with could weaken farm balance sheets after this crop year. If that turns out to be true, we could see the value of farmland stabilize,” Stiles said. “As inflation abates and mortgage rates rise, investor interest in farmland may cool somewhat.”