FAYETTEVILLE, Ark. — Horticulture researchers with the Arkansas Agricultural Experiment Station have partnered with three breweries across the state in a quality research study of hops grown in Arkansas with a public release set Nov. 5 in Siloam Springs. 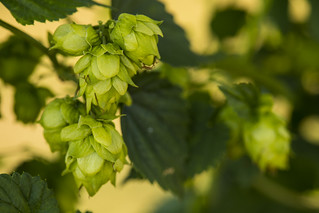 HOPS PARTNERS — Post-harvest research on hops grown at the Arkansas Agricultural Experiment Station will be conducted with three breweries in Arkansas as part of an Arkansas Department of Agriculture Specialty Crop Block Grant to study the feasibility of an Arkansas hops industry. (U of A System Division of Agriculture photo by Fred Miller)

Following a three-year study to find varieties of hops that grow well in Arkansas, the experiment station will collaborate with Ivory Bill Brewing Company in Siloam Springs, Prestonrose Farm and Brewing Company in Paris, and Stone’s Throw Brewing in Little Rock on the research. The experiment station is the research arm of the University of Arkansas System Division of Agriculture.

Ivory Bill will hold a public event beginning at 7 p.m. Saturday, Nov. 5 at the brewery, 516 E. Main St. in Siloam Springs, to release a pale ale made with Crystal hops grown at the experiment station’s Fruit Research Station in Clarksville.

“We know it’s possible to grow hops in the state, but we want to know more about what brewers think about the quality and feasibility of using whole-cone, dried Arkansas-grown hops,” Amanda McWhirt, associate professor and extension horticulture specialist, said.

An initial three-year research project on growing hops was completed in 2021 at the Fruit Research Station in Clarksville. The study showed that Cascade and Zeus hops varieties had the best yields, plant health and vigor. Crystal and Cashmere showed moderate potential for being grown in Arkansas. Canadian Red Vine hops grown at the Fruit Research Station will also be evaluated by brewery partners. The horticulture team is continuing its research into growing hops, with new trials started in 2022 aimed at increasing yield through new methods of plant training.

Most of the nation’s hops for the craft beer industry are grown in northern states where the day length is longer, which results in the highest yields. The Arkansas study showed that some hops varieties could produce a viable specialty crop in Arkansas to appeal to the state’s growing microbrewery industry, McWhirt said. Renee Threlfall, horticulture post-harvest and processing research scientist with the department of food science, said she expects initial interest in hops production will mostly be small-scale growers to supply the local microbrewing industry.

The post-harvest research with the brewery partners includes evaluating the use of whole-cone hops in the brewing cycle, from bittering in the boil to “dry hopping” for additional hops aromas during late-stage fermentation. While some breweries use whole-cone hops for specialty beers, most breweries use hops that have been dried and pelletized by processors for day-to-day brewing, McWhirt said. An Arkansas-based hops industry would initially rely primarily on whole-cone hops because of the state’s lack of access to hops processors, she added.

The hops study is funded by a Specialty Crop Block Grant from the Arkansas Department of Agriculture through 2024.

“We’re so excited to be hosting Amanda McWhirt and to be part of the conversation about the future of farming in Arkansas,” Casey Letellier, owner/brewer at Ivory Bill Brewing Company, said. “We value the opportunity to connect people with the idea that drinking beer is an agricultural act.”