With Mississippi River shipping at a crawl, farmers seeing prices for their grain falling
skip to main content
News - 2022

With Mississippi River shipping at a crawl, farmers seeing prices for their grain falling

“There’s only so much storage at the elevators; only so much space,” said Hunter Biram, extension economist with the University of Arkansas System Division of Agriculture. “Elevators will turn farmers away when they don’t have anywhere to put it.”

By Mary Hightower
U of A System Division of Agriculture
Oct. 12, 2022

(Newsrooms: With art of barges at Helena-West Helena, https://flic.kr/s/aHBqjAaCQ7; portrait of Biram)

LITTLE ROCK — Farmers faced with high fuel and fertilizer costs this growing season could at least look for consolation in relatively high commodity prices. However, even that right spot may be slipping away as low water on the Mississippi River slows shipping and keeps grain backing up at local elevators.

On Monday the U.S. Coast Guard reopened two stretches of the Mississippi River near Memphis, Tennessee, and Stack Island, Mississippi, to one-way commercial traffic after dredging the channel. The closures had stopped some 100 towboats and 2,000 barges last week. By Tuesday morning, there were no queues, the Coast Guard said. 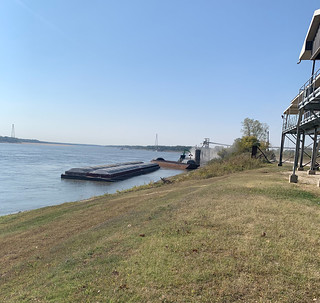 FULLY LADEN — Full barges tied up near loading facility at Helena-West Helena, Arkansas. (U of A System Division of Agriculture photo by Robert Goodson)

“There’s only so much storage at the elevators; only so much space,” said Hunter Biram, extension economist with the University of Arkansas System Division of Agriculture. “Elevators will turn farmers away when they don’t have anywhere to put it.”

Harvest is underway in Arkansas. According to the National Agricultural Statistics Service, 8 percent of the state's soybeans have been harvested as of Oct. 11. That compared to 20 percent at this time last year and the 19 percent five-year average. Harvest for corn was at 97 percent and 90 percent for rice.

On Monday, soybeans with nowhere to go were being piled high at the terminal at Helena-West Helena, with trucks lined up waiting to unload. Forty-eight percent of Arkansas’ soybeans are exported.

The growing stockpile, coupled with uncertainty about when the traffic will be able to move down the Mississippi through New Orleans, begins to erode prices farmers would get at the elevator.

“In these instances, basis weakens when there’s a lot of grain on hand,” Biram said. “With rising barge rates, it’s more expensive to ship grain downriver. Grain elevators will bid lower and offer less for grain to account for the higher cost of shipping grain down the river.”

Biram said that basis last week was down $1.30 for soybeans and was about the same for corn. Basis is the difference between a local cash price and the futures market price. There was a little bit of a rally as dredging of the river began to free up some traffic, but basis was still down 75 cents. Last year, basis was down 25 cents at the same time.

“With lower prices at the elevator, if farmers have storage, they should store their grain and sell it later when they might be able to get a better price,” he said.

Harvest aside, the other worry with the low river is that while crops are headed toward New Orleans for export, this is the time when fertilizer typically makes its way upriver for next season’s crops.

“The biggest issue is planning for next year,” he said. With fertilizer, “that cost is already high and we don’t know yet how much higher that could go. There could be a big rain next week and alleviate all that.”

Outside of storing grain and hoping for rain, there’s not much more farmers can do this year to protect themselves. However, now is the time for growers to take a deeper look at their crop insurance options for improved risk management.

“RP offers downside risk protection against loss of revenue caused by a change in prices, loss of production, or a combination of both,” he said. “With RP, revenue guarantees are calculated with a farm-level yield history, the higher of a projected price or harvest price determined by RMA, and a coverage level.

“RP-HPE offers similar price and yield protection but doesn’t consider the harvest price when calculating revenue guarantees which is not as useful if you anticipate crop prices to increase between planting and harvest,” Biram said. “When making the RP vs. RP-HPE choice, the main question to ask is if RP will provide a greater revenue guarantee than RP-HPE and will the indemnity net of premium be higher if I choose RP?”

Biram said with the deadline for growers to enroll for crop insurance being Feb. 28, there are a few questions to consider before then:

Growers can find agents through the Risk Management Agency.