To give native grasses a good head start, limit grazing and stay on top of weeds
skip to main content
News - 2022

To give native grasses a good head start, limit grazing and stay on top of weeds

Once a good stand has been established, different strategies can be used to maintain the stand and suppress weeds.

FAYETTEVILLE, Ark. — So, you’ve established your first stand of native forage grass. It looked iffy at first, but you made it through Year 1. Congratulations!

Now for the bad news: While the first year of establishment is a nail-biter for native grasses — big bluestem, indiangrass, little bluestem — taking care of these grasses doesn’t stop there. After all, these grass stands can last for decades, and the better care pasture managers take during the first few years, the longer a stand will last. 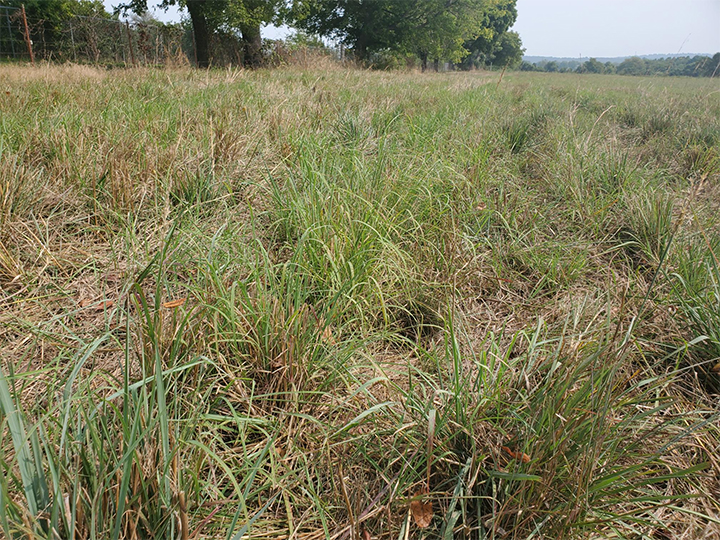 NATIVE GRASSES --Patience and weed management are a must with stands of native grass.  (U of A System Division of Agriculture photo by Dirk Philipp)

Dirk Philipp, associate professor of forage agronomy for the University of Arkansas System Division of Agriculture, has some tips for surviving the sophomore stage of grass promulgation.

“Weed pressure is a concern that will be an issue for the first several years,” Philipp said. “During the establishment year, weeds will be abundant due to the fact that the grass canopy remains open for at least half the growing season. The native grasses usually coexist with a host of forbs in a prairie setting, although they classify as bunch grasses, and the spaces in between the ‘bunches’ will be substantial.”

Weed pressure
A common frustration is that the weed problem is never “solved” for a given plot of land. Weeds will change from year to year, Philipp said, depending on when spring starts to warm up and the moisture of the soil.

He encourages producers to be particularly meticulous about Palmer amaranth, commonly known as pigweed.

Pigweed “will take over everything if left unchecked,” Philipp said, “or even if herbicide application is delayed by just one to two weeks, due to its enormous growth rate.”

In subsequent years, once a good stand has been established, different strategies can be used to maintain the stand and suppress weeds — in fact, given the change in weed dynamics likely to occur, it’s typically necessary for growers to change their approach, year to year.

“Treat your native grasses like an investment,” Philipp said. “One that should work for your bottom line — but at the same time needs constant care.”

Philipp suggests scouting fields frequently during the early weeks of each growing season. While “missing the boat on pigweed is unforgiveable,” other, more shade-sensitive weeds can be shaded out later in the season by the grass itself, although this is not ideal.

“You don’t have to resort to spraying with herbicides all the time,” he said. “A combination of mowing high with a bushhog and/or spraying will work if you want to kill weeds that are temporarily above the grass canopy early in the season, but which you may not reach when the grass canopy is tall already.”

Don’t rush grazing
Philipp cautions against moving cattle onto newly established pastures too early, noting that many native grasses are much more sensitive to close grazing than tall fescue, for example.

“Moving cattle in too early may set them back too much,” he said. “If your native grasses are about 15-18 inches, you may start grazing, but remove cattle as soon as they reach 10 inches.”

Philipp suggests growers allow only light grazing of native grasses for a couple of years following the establishment year, during which no grazing should be done, allowing the grass to generate substantial amounts of biomass, set seeds later in the season and further propagate from those seeds.

“Once you are beyond Year 2, keep scouting for weeds, of course, but you can try to limit herbicide use,” he said. “Lush stands will help with shading the soil and reduce light influx to such an extent that many weeds cannot survive.

“Not every weed has to be killed,” Philipp said. “You will always have some level of broadleaf and grassy weeds such as henbit, buttercup, and perhaps more serious ones like goose- and barnyard grass. Especially with grass weeds, just try to stay proactive and ‘on top of it.’”