Arkansas growers go in strong for cotton and soybean, pull back from corn
skip to main content
News - 2022

Arkansas growers go in strong for cotton and soybean, pull back from corn

LITTLE ROCK — Arkansas growers intend to plant significantly more cotton and soybean acres in 2022, while greatly reducing corn acreage, according to the 2022 Prospective Plantings report released Thursday by the U.S. Department of Agriculture. 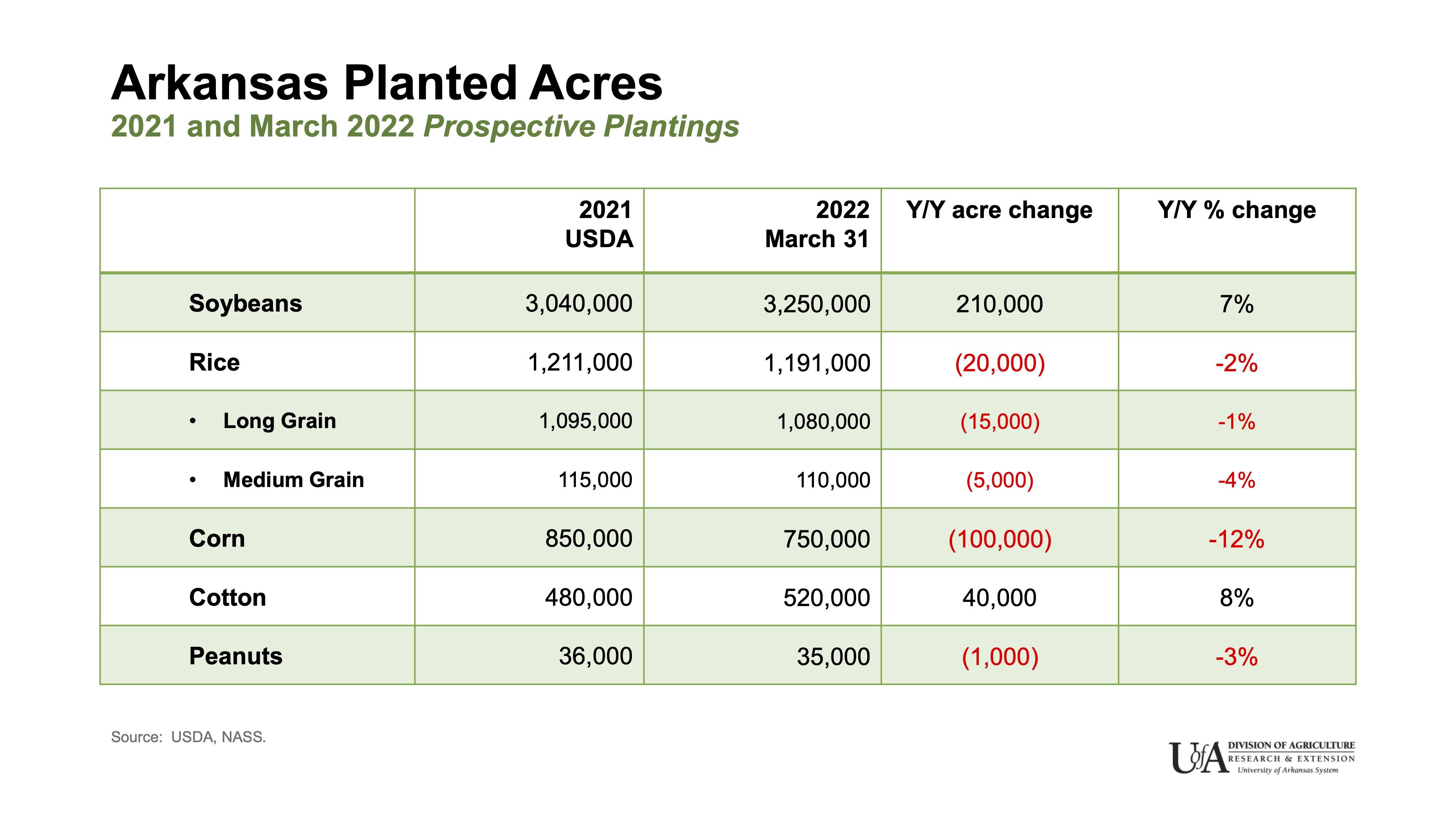 A BIG YEAR FOR COTTON & SOYBEAN — Arkansas growers intend to plant significantly more cotton and soybean acres in 2022, while greatly reducing corn acreage, according to the 2022 Prospective Plantings report released Thursday by the U.S. Department of Agriculture. Potential planted acreage for all crops in Arkansas grew about 2.2 percent over 2021 to about 7.16 million acres, according to the report. (Division of Agriculture graphic.)

The estimates in the report are based primarily on surveys conducted during the first two weeks of March. The March Agricultural Survey is a probability survey that includes a sample of approximately 73,000 farms to gauge crop acreage intentions for the 2022 crop year.

Market volatility a factor
Scott Stiles, agricultural economist for the University of Arkansas System Division of Agriculture, said volatility in some market sectors, as well as international events including the Russian invasion of Ukraine and the attendant global sanctions, have led investors to move some funds into the agricultural sector, which may promise a better return on investment.

“With equity markets down year to date, some money is leaving that space and diversifying into commodities, which are traditionally seen as an inflation hedge,” Stiles said. “This lends fuel to a general rally in commodities that has been underway since late 2020. Compared to a year ago, prices for all of the major crops are significantly higher.”

Stiles did warn, however, that high input prices will affect growers’ profitability.

“Although historically high grain and cotton prices provide incentives for planting any of the major crops, costs for some inputs, specifically fuel and fertilizer, are projected to more than double this year,” Stiles said. “High crop prices will not necessarily incentivize higher production given record-high production costs.

“The Black Sea conflict has escalated the input price surge in recent weeks, he said. Wholesale urea prices, for example, have risen 69 percent over the past month at the New Orleans buying point. Diammonium phosphate and potash prices have increased 31 and 21 percent respectively over the same period.

“Added volatility has also been seen in diesel prices over the past month,” Stiles said. Diesel futures on the New York Mercantile Exchange (NYMEX) are now trading at nearly $3.80 a gallon —about $1 higher a gallon than pre-invasion prices. On March 9, diesel futures traded at $4.67 a gallon — the highest point in the last 20 years.

Cotton
Cotton represented the most substantial increase in Arkansas agricultural acreage, increasing by 8 percent over 2021 to about 520,000 acres.

Bill Robertson, extension cotton agronomist for the Division of Agriculture, said the numbers reflected anecdotal information from growers and consultants throughout the state.

“This runs in line with what I’m hearing from most folks,” Robertson said. “Our established cotton producers are still expecting to expand their cotton acres slightly. The biggest limitation is our picker capacity.

“The wildcard is the new growers,” he said. “Some have made significant purchases and are now locked into cotton. While many are planning on custom harvesters to pick their crop and they have a great deal of flexibility at planting time.

“Throughout the winter months there has been consensus that cotton acres would increase this year, both in the United States and Arkansas,” Stiles said. The average pre-report guess for U.S. acres was 12.3 million, with estimates ranging from 11.7 to 13 million.  Planted acres totaled 11.2 million in 2021.

“In our recent crop budget revisions, we see input costs for cotton increasing close to 40 percent this year, or about $210 per acre,” he said. “Assuming an average yield of 1,250 pounds, cotton prices needed to increase 17 cents a pound over last year to keep up with input costs. That’s basically where we are. When you compare the average price for December futures during the 2021 and 2022 National Agricultural Statistics Service planting intentions surveys, the difference is roughly 17 cents.

“A year ago, December futures averaged about 85 cents from late February to mid-March. This year, the average price was $1.02 during the survey,” Stiles said. “When you think about it in those terms, cotton prices at $1.02 are just keeping up with cost increases. Assuming we have trend yields, farm incomes will be basically flat this year even with historically high cotton prices.”

“It’s certainly no surprise that soybean acres are expected to increase this year,” Stiles said. “Actually, the 210,000-acre bump for Arkansas seems conservative, given the relatively lower input costs and price strength for soybeans.”

“Traders were a little surprised today by the record U.S. acreage number,” he said. “The market fell hard following the report. The November ’22 contract closed almost 50 cents lower, to finish the day at $14.20.”

Corn
The most significant acreage decrease in Arkansas happened for corn, which fell 12 percent from 2021’s 850,000 acres to 750,000. Jason Kelley, wheat and feed grains agronomist for the Division of Agriculture, said that despite high grain prices, the high price of fertilizer has reduced interest in planting corn for some growers.

“The current high grain prices for corn are overshadowed by the historic high fertilizer prices,” Kelley said. “Since corn is the crop that uses the greatest amount of fertilizer that we grow, it is not surprising that corn acres are anticipated to be down in Arkansas and across much of the country this year.”

Winter wheat
Arkansas wheat acreage increased by about 5 percent over 2021, rising to about 220,000 acres. Nationally, intended wheat acreage grew about 1 percent, to about 47.4 million acres.

“Grains have gotten an added boost this winter from poor weather in South America and the Russian invasion of Ukraine,” Stiles said. “At present, Ukraine exports are blocked and there’s uncertainty over how much 2022 production will take place. Furthermore, Russian grain, fertilizer and energy exports are disrupted by sanctions.”

Rice
Most other Arkansas commodity crop acreage fell by a few percentage points as well, including rice, which dropped by 2 percent and 20,000 acres to about 1.19 million acres.

Jarrod Hardke, extension rice agronomist for the Division of Agriculture, said the USDA acreage projections fell “right in line with my expectations for rice.”

“This will be the first time in approximately 10 years that we don’t see a significant upswing in acres in an even-numbered year,” Hardke said. “So rather than acres being ‘flat,’ this has more of the makings of being a 200,000-300,000-acre reduction below our typical acres for even-numbered years since 2012.”