FAYETTEVILLE, Ark. — Cattle grazing pastures with high soil-test phosphorus may be getting enough of the nutrient from the grass to eliminate the need for a phosphorus feed additive, according to Arkansas Agricultural Experiment Station research. 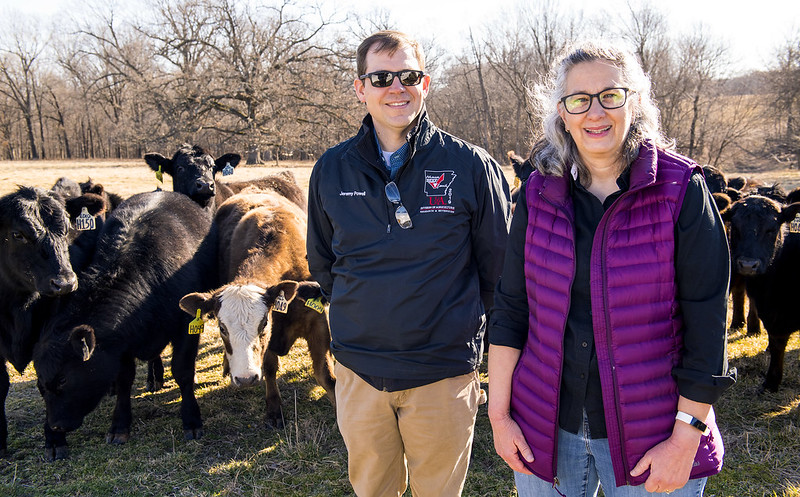 “Phosphorus is necessary for developing heifers,” said Beth Kegley, professor of animal science for the Arkansas Agricultural Experiment Station, the research arm of the University of Arkansas System Division of Agriculture. “It’s important for all energy needs, metabolism, bone growth, fertility and other uses.”

In many areas of the state, especially in northwest Arkansas, farms often have both beef cattle and poultry operations, said Jeremy Powell, professor of animal science and Kegley’s co-investigator.

“There has been an increase in phosphorus concentrations in soils where livestock and poultry manure have been repeatedly applied to grazing pastures or hay meadows,” Powell said. “Consequently, forages grown on soils high in phosphorus tend to contain high amounts of the mineral itself.”

Powell said that phosphorus is an expensive ingredient in the cost of regular mineral supplementation of beef cattle. He and Kegley investigated whether it was necessary to supplement phosphorus in areas where those concentrations, often referred to as soil-test P, were high.

“The objective of this research was to examine the effects of phosphorus intake from grazing on beef heifer growth performance and conception rates,” Kegley said.

The study used two sets of 72 crossbred Angus heifers over two years, each distributed into eight groups according to weight about 30 days after weaning. They fed a control group a supplemental mineral mix that had no phosphorus. The others got an identical diet except with the addition of 4 percent supplemental phosphorus in the mineral mix.

All the heifers grazed mixed grass pastures with a history of livestock and poultry manure application that resulted in soil-test P levels of more than 130 parts per million. The research team also supplemented the animals’ forage diet with 0.5 percent of their body weight in soy hulls.

Kegley said they measured the animals’ body weights throughout the study. The researchers collected reproductive tract score data before the breeding season and pregnancy data following a two-month breeding season.

Kegley said mineral intake throughout the study did not differ between the animals that received phosphorus supplements and those that did not. Also, reproductive tract scores, measured by ultrasound twice during the study, did not vary significantly between the two groups. Pregnancy rates were similar for the control group that did not receive supplemental phosphorus at 79 percent versus 80 percent for the group that received the supplemental phosphorus.

“The results showed phosphorus supplementation of developing beef heifers for about 300 days following weaning and throughout the breeding season did not improve growth or reproduction when the heifers were grazing pastures with a history of livestock or poultry manure application, Kegley said.

“For Arkansas, the beef cattle inventory was about 800,000 head in 2020,” Powell said. “Theoretically, if replacement heifers were approximately 20 percent of the total cowherd in the state, that would be 160,000 developing heifers.

“The reduction of cost of the mineral supplementation for this period was about $8.10 per head, potentially reducing the annual cost more than $1.29 million for the development of the Arkansas beef heifer replacement herd,” Powell said.