The Asian longhorned tick, also known as a bush tick, was found in May by Elizabeth Smith, extension entomology program tech for the University of Arkansas System Division of Agriculture, who was collecting ticks from cattle at the Savoy Research Complex. The tick was sent to the Animal and Plant Health Inspection Service, or APHIS, lab for testing. APHIS is part of the U.S. Department of Agriculture. 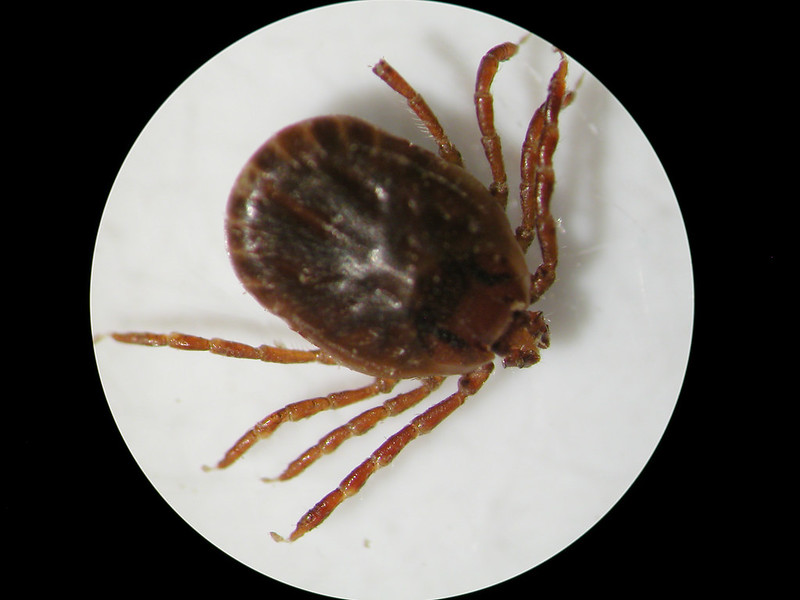 TICK — Image of invasive Asian Longhorned tick. (U of A System Division of Agriculture photo by Kelly Loftin)

The invasive tick can kill its host by swarming the animal but can also transmit a protozoan parasite called Theileria orientalis. One Theileria genotype, Ikeda, can kill cattle by attacking blood cells.

The tick collection is part of a broad surveillance project to monitor spread of cattle diseases such as anaplasmosis through ticks. The project is being conducted by Kelly Loftin, extension entomologist, Emily McDermott, assistant professor of entomology, and Jeremy Powell, veterinarian and animal science professor. The work is a collaboration among personnel within the Arkansas Agricultural Experiment Station and the Cooperative Extension Service, the research and outreach arms of the Division of Agriculture.

“During that four-day sampling in May, we collected from over 300 head of cattle,” Loftin said. “Virtually all cattle had lone star ticks attached. The cow that had an Asian longhorned tick attached also had lone star nymphs and adults. Elizabeth recognized the tick as one she had not collected before.”

The Asian longhorned tick was first found in Arkansas in June 2018 on a dog in Benton County. USDA first confirmed the presence of the tick in 2017 in New Jersey and said it is likely to have arrived in the United States seven years earlier. The mechanism for its arrival in the U.S. isn’t known, but USDA said it entered on pets, livestock or people.

Asian longhorned ticks are brown and are very small. The adult female is only about the size of a pea when it is full of blood. Their size and quick movement make them very hard to detect. These ticks have the ability to reproduce with or without males.

The ticks have been found on a broad range of hosts, including deer, foxes, squirrels and migrating birds.

“Producers and veterinarians should be aware of this disease and especially if they are seeing animals that are anaplasma symptomatic but are not testing positive, Theileria is something that should be considered,” McDermott said.

McDermott said while there haven’t been any reports in Arkansas of cattle being killed by swarms of Asian long-horned ticks, “in North Carolina and Ohio there are some reports of calves succumbing to these tick infestations. We have not seen those numbers in Arkansas yet.”

Considering how the ticks reproduce, “there should not be any limit to how many ticks are out there. We are entrusted with doing further research and finding out what’s going on,” she said.

“We don’t know how it got here. If you look at the list of hosts from APHIS it’s a pretty long list and they collect a lot from white- tailed deer,” Loftin said.

With the potential for high rates of reproduction and movement through many species, Loftin said “My big concern is the cattle.”

The disease caused by the Theileria organism was first identified in the U.S. in 2017 in a Virginia beef cattle herd that showed symptoms of anemia. The cattle tested negative for anaplasmosis, but later found to have theileriosis. Researchers found the Asian longhorned tick even though the herd had no contact with outside cattle.

Earlier this month, the Tennessee Department of Agriculture announced the finding of theileriosis in a herd in middle Tennessee.

“One of the biggest differences is that typically — but not always — we see anaplasmosis only affecting mature cows,” he said. “The younger ones can get it, but don’t show clinical symptoms. That’s not the case with Theileria.”

Unfortunately, “We really don’t have effective treatments, and there’s no available vaccine for this,” Powell said.

Seeking to expand the research

Loftin said the team was applying for a grant from USDA to continue its work by determining how prevalent Theileria might be in these ticks within Arkansas; determining host preference and environmental tolerance of the ticks; and continuing to conduct educational outreach to cattle producers, veterinarians and extension personnel. To collect a tick, use tweezers and grasp the tick as close to its attachment point to the skin. Carefully pull away from the host and preserve in a small container filled with alcohol.

“We are just scratching the surface when it comes to this tick,” Loftin said. “There is a lot of research that needs to be done to protect our herds from this and other tick-transmitted diseases.”

The University of Arkansas System Division of Agriculture’s mission is to strengthen agriculture, communities, and families by connecting trusted research to the adoption of best practices.

Through the Agricultural Experiment Station and the Cooperative Extension Service, the Division of Agriculture conducts research and extension work within the nation’s historic land grant education system.

The Division of Agriculture is one of 20 entities within the University of Arkansas System. It has offices in all 25 counties in Arkansas and faculty on five system campuses.