(Newsrooms: With art at https://flic.kr/s/aHBqjzUxHz )

FAYETTEVILLE, Ark. — The Morrill Acts of 1862 and 1890 and the 1944 law that became known as the GI Bill had an enormous influence on the growth of the United States through the last two centuries, said Ed Fryar, entrepreneur, former professor and now trustee for the University of Arkansas System.

Fryar was delivering the Bickford Lecture, a keynote for the National Agricultural Alumni Development Association, which was holding its annual meeting this month in Fayetteville hosted by the UA System Division of Agriculture and the Dale Bumpers College of Agricultural, Food, and Life Sciences. Fryar detailed innovations between 1770 and the present that led to improvements in food production. 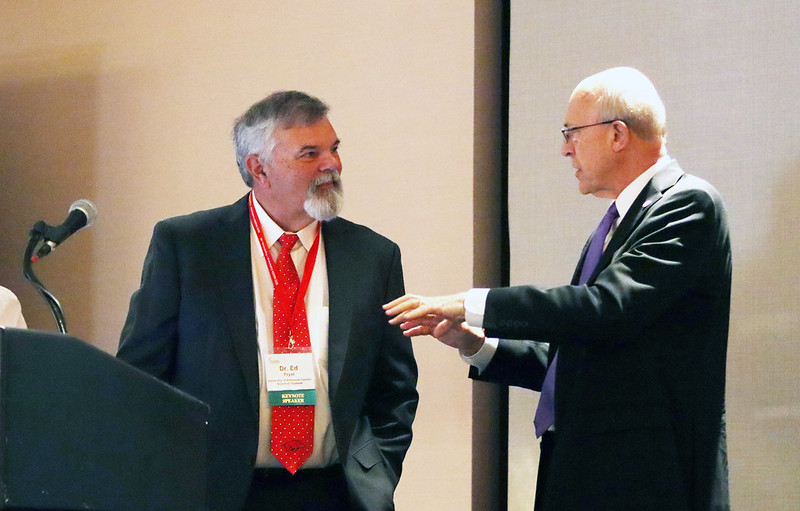 Much of the agricultural production methods in the 18th century were unchanged from medieval times and before, Fryar said. Wooden plows opened the earth and seed was broadcast by hand. Animal waste provided fertilizer. Harvest was done by sickle and scythe and reaped and sheaved by hand.

Among the improvements since 1770 were self-polishing steel plows, whose slick surface would not get bogged down by accumulated soils; and plows that a farmer could ride upon instead of walk. Mechanization changed not only the way seed was put into the ground, but also how harvesting and threshing were done.

By 1860, these mechanical innovations reduced the number of hours needed to produce 100 bushels of wheat to 189.

“Until then, everything has been an improvement in physical capital,” Fryar said. “The Morrill Act passed in 1862 was an enormous innovation in human capital.”

The Morrill Act, officially known as the Land-Grant College Act of 1862, set about to make higher education more accessible and encourage research and learning as the nation expanded westward. The schools would teach agricultural, mechanical and military arts. One of the schools established under this act would become the University of Arkansas.

“Think back prior to World War II — higher education was primarily for the elites,” Fryar said. “After World War II, with the GI Bill you see all those vets, most of whom were working class, going to college. That had a tremendous impact on growth in the U.S. in a very short time.”

Today, there are more than 100 land grant colleges nationwide.

“I’m not sure if the Morrill Acts or the GI Bill had the bigger impact on human capital in the U.S.,” he said. “The cumulative impact of the land grant system is probably much greater” due to its greater reach and lifespan.

With help from private sector and land grant innovation, the time needed to produce 100 bushels of wheat declined to just over an hour in 2020.

Fryar noted many of other innovations that have had an influence on agriculture, such as civilian use of GPS, the discovery of CRISPR gene editing and the use of autonomous tractors and sensors that can map fertility and carbon and guide tillers.

“I don’t know what 80 years in the future will look like,” he said, but noted how far the industry has come in the last eight decades.

Not every innovation caught on

Not every innovation was adopted straight away. For example, the sulky plow introduced in the mid-1800s enabled a farmer to ride on a seat mounted on the plow.

“This was the first plow that the farmer didn’t have to walk behind,” he said. However, “a lot of farmers would still walk behind it. There was a lot of pride to walking behind it.”

Fryar is a former professor of agricultural economics and agribusiness in the Bumpers College of Agricultural, Food and Life Sciences. He went on to co-found Ozark Mountain Poultry in 2000, selling the company 18 years later. Fryar was appointed to a 10-year term on the UA Board of Trustees in 2019. In 2020, the Fryar Family Charitable Foundation donated $10 million to develop a center that provides analysis and education on issues of price risk management in agriculture, finance and energy.

To learn more about Division of Agriculture research, visit the Arkansas Agricultural Experiment Station website: https://aaes.uark.edu. Follow on Twitter at @ArkAgResearch. To learn more about the Division of Agriculture, visit https://uada.edu/. Follow us on Twitter at @AgInArk. To learn about extension programs in Arkansas, contact your local Cooperative Extension Service agent or visit www.uaex.uada.edu. 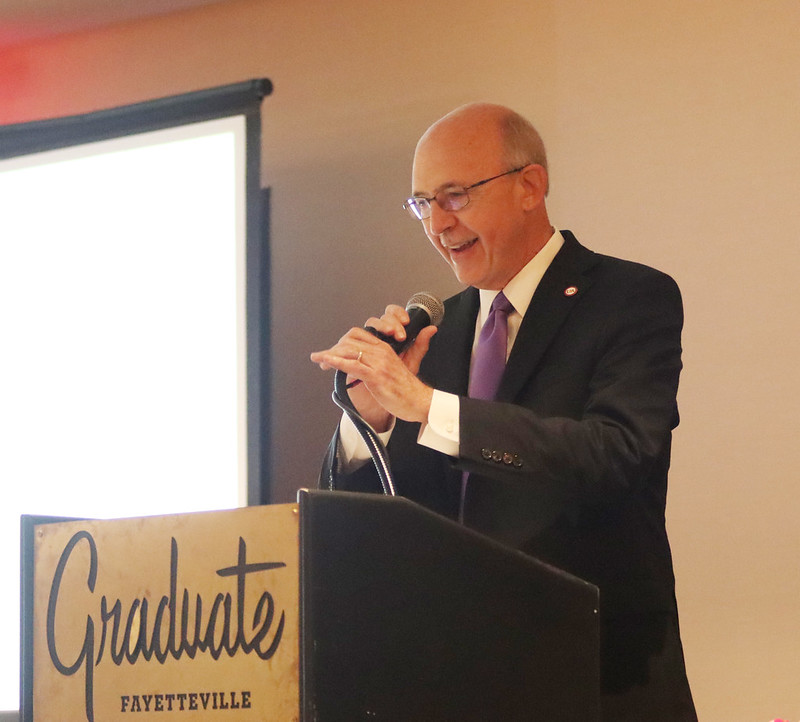