MEMPHIS, Tenn. — If the proposed America Competes Act is passed, the United States will see a “revolutionary change in trade law,” Stephen Vaden, judge on the Court of International Trade, told attendees at this year’s Mid-South Agricultural and Environmental Law Conference. 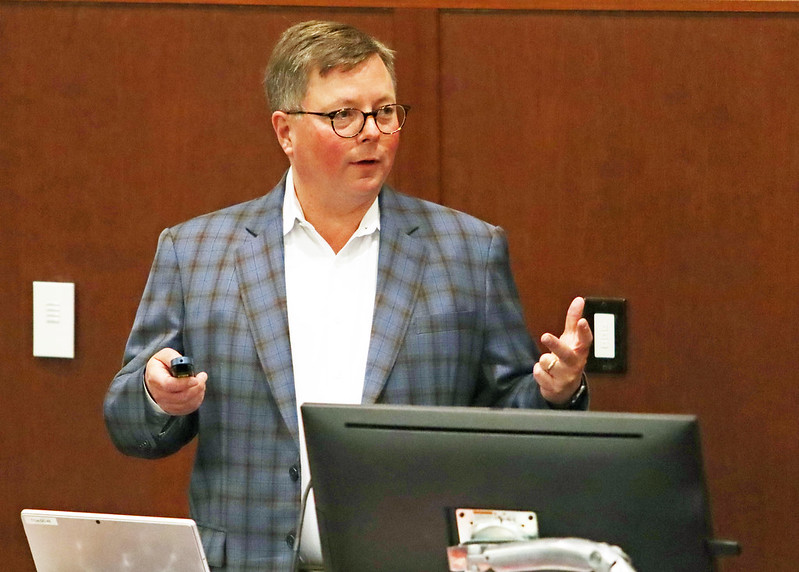 FARM BILL OUTLOOK — Hunt Shipman of Cornerstone Government Affairs gives the outlook for the 2023 Farm Bill. Taken during the 2022 Mid-South Agricultural and Environmental Law Conference held June 10 in Memphis, Tennessee. (U of A System Division of Agriculture photo by Mary Hightower.)

Vaden was the keynote speaker for the conference, which was presented by the National Agricultural Law Center and hosted at the University of Memphis Cecil C. Humphreys School of Law. The June 10 full-day lineup of speakers’ subjects ranged from insights into the economy and increasing consumer disconnectedness from agriculture to a summary of the pressures expected to affect development of the next Farm Bill.

“Our presenters were excellent this year, and we were very fortunate to have their time. There was so much substance and knowledge that will benefit our attendees over the politically and economically turbulent months ahead,” said Harrison Pittman, director of the National Agricultural Law Center. “We are looking ahead to our 10th annual conference next year.”

Among other things, the America Competes Act proposes a change to the way the Commerce Department deals with tariffs. Currently, the “Department of Commerce is legally obligated to only consider harm to the industry that is requesting an investigation,” he said.

For example, if the Commerce Department is examining whether foreign imports are harming the steel industry, “they may not take into account whether the people who buy steel may be harmed because of the higher price of steel that may result from tariffs.”

Vaden said one of the provisions in the act would “change the law to allow the Department of Commerce to consider these downstream effects.

“This will be a revolutionary change in trade law. It’s never been done this way in the United States,” he said, adding that any views agricultural interests have in this new proposal should be promptly communicated to members of Congress.

Vaden said he hears from industry that there is “consternation about whether the Department of Justice considers the views of agriculture. In the area of trade, there are concerns whether people who produce crops can be taken into consideration by the Commerce Department whenever it is making a determination on tariffs or other import duties.

“There are many routes through which agriculture can influence national policy and regulation, he said, and “the only way you are not heard is if you refuse to participate in the process.

“Agriculture has multiple ways to have its voice heard. They just have to be used,” he said. “The key to using them is knowing about them.”

Vaden offered several points of entry for agriculture to make its concerns heard, including the Office of the Solicitor General.

Vaden said the Office of the Solicitor General, which decides what position the federal government will take on an issue before the Supreme Court, “is probably the most professional and hidebound in terms of procedure.” Vaden said that before the solicitor general formulates that position, there are several opportunities for the U.S Department of Agriculture and litigants to submit views.

Other opportunities include being sure to express concerns and opinions to other cabinet agencies such as USDA or the Environmental Protection Agency that are involved in a case.

Alexandra Dunn, a partner with Baker Botts, LLP and a former assistant administrator for the EPA, talked about the factors stressing the federal agency’s decision-making process, including fewer staff members and increasing pressures from environmentalists, farm worker groups and the development of pesticide resistance.

Urbanization is another factor. Dunn noted a study that said that by 2050 seven out of every 10 people living in the United States will be in an urban area.

“By 2050 most people are going to live in an urban area and be completely disconnected from where their food comes from,” she said, adding that this presents an opportunity for those “who are still outside the urban areas and involved in agriculture to be really vocal and to be heard, because this is important.”

Dunn said better technologies and better information being provided to the EPA by registrants help maintain the use of tools such as Enlist Duo. She cited the initial ban on its use in some Arkansas counties because of concerns under the Endangered Species Act.

However, “Enlist Duo is being used and it can now be used in all of Arkansas,” she said. “We got better information. Better information allows us to use this product now in places we couldn’t use it before.”

Both Enlist Duo and dicamba have been the subject of federal lawsuits.

“When you ask, ‘what is the future of those crop protection products, Enlist Duo and dicamba,’ they’re going to be out there,” Dunn said, adding that it is important to keep in mind the stressors on the regulatory system. “If you asked me what the future is, I’m not going to say the future is sunny bright, but the future includes these tools.

“It’s going to take a lot of proactive work to keep them fully available and those stressors may limit their availability,” she said.

Hunt Shipman, principal and director of Cornerstone Government Affairs, talked about the unique environment in which the 2023 Farm Bill is being created — by two Congresses.

“The current Congress [is] beginning to write a new Farm Bill that will be finished in a new Congress,” he said, adding that the 117th Congress, now in office, may see a change of leadership with the mid-term elections that will bring in the 118th Congress this fall.

“One question that remains to be seen as we look ahead, is will issues around prices and exports result in demand destruction as the dollar continues to be strong and makes American exports less competitive,” he said.

About the National Agricultural Law Center

The Center is a unit of the University of Arkansas System Division of Agriculture and works in close partnership with the USDA Agricultural Research Service, National Agricultural Library.