By Lon Tegels
U of A System Division of Agriculture

MONTICELLO, Ark. — Diversity and environmental stability are among the qualities that led to judges naming Rocky and Alicia Lindsey, along with their two sons Isaac and Jonah, as the Drew County Farm Family of the Year.

Two volunteer judges, Jaret Rushing, Calhoun County extension staff chair for the University of Arkansas System Division of Agriculture, and Ethan Branscum, agribusiness credit officer with AgHeritage Farm Credit Services, spent three hours at the Lindsey’s Peyton Place Farms on June 7, questioning Lindsey about the farm operations. They toured a farm pond under construction and discussed the value of a 30-year-old donkey that once protected the sheep. Nowadays, Lindsey said the donkey is more ornamental and has a separate fenced-in area to keep him from fighting for the sheep's food. 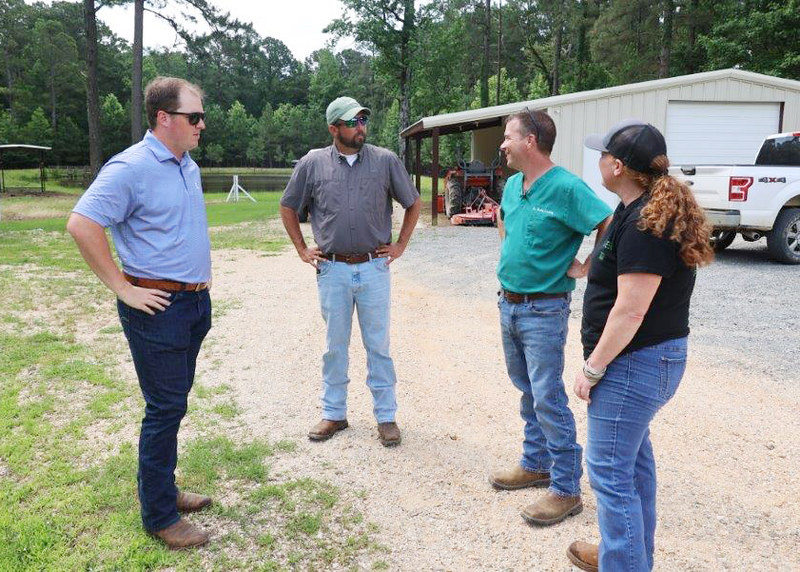 JUDGING — From left, Ethan Branscum, and Jaret Rushing, both part of the Farm Family of the Year judging team, visit with Rocky Lindsey, DVM, and his wife. Alicia. The Lindseys were named the Drew County 2022 Farm Family of the Year. Branscum is agribusiness credit officer with AgHeritage Farm Credit Services and Rushing is the Calhoun County extension staff chair.  (UA-Monticello image by Lon Tegels)

District winners will be announced in June, with state judging in July. A statewide winner will be announced at a luncheon in December. Lindsey, a veterinarian, said Peyton Place Farms was nominated in May to represent Drew County.

Rushing said he and Branscum were judging the farm operation for its "efficiency of production, conservation of energy of resources, and leadership in agricultural and community affairs."

The Lindseys have 60 sheep, a dozen goats and some cattle; they also manage 300 acres of hardwood timber.

Rushing said he was impressed with how the Lindseys integrate multiple parts of the operation, including use of the Katahadin sheep to manage hay meadow weeds. The remaining forage is cut and sold as premium quality hay.

“We have a sheep operation. The sheep complement the cattle. The sheep eat the weeds, the cows eat the grass, which is their preferred diet,” said Lindsey. “They complement each other and help the pastures; we don't have to use herbicides where we have the sheep because they eat all the weeds themselves. So that means we can market our hay as 'no herbicides applied.’ We cut it at a good maturity and where it has good nutrition as well."

"One of the reasons we selected sheep as our primary livestock is that the market is very stable,” Lindsey said. “America does not produce enough sheep meat to meet the demand produced by Hispanic, Caribbean and Muslim immigrants.”

Shocked by the honor
“I don't consider myself really to be a farmer. It's an honor but shocking," said Alicia Lindsey. Lindsey says she does a little bit of everything on the farm.

“I feed the goats every morning and dogs who protect our goats. I also work with animals. I work the sheep, vaccinate and trim hooves,” she said.

"Usually, you think of row croppers or people who have cattle farms as a farm family. So it is really neat and an honor," she said.  Lindsey credits her sons Isaac and Jonah with helping the place operate. "For years, our oldest son, Isaac Lindsey, was the farm manager, took care of the sheep, and fed the ruminants. He was instrumental during hay season, cutting, raking and baling.  Jonah was younger but would also help. Now that Isaac has stepped away to find a career, Jonah has stepped up while Isaac was at school.”

Peyton Place sits on Highway 133, leading into Monticello. It was not named for the 1960s soap opera.

"Many years ago, in the 1880s, the guy who owned the farm's last name was Peyton,” Alicia Lindsey said.  "During the horse and buggy days, people would stop here at Peyton Place. The homestead was near the big tree where we now have the sheep. Rocky's mom and dad named the place after him."

“We have cattle that we put on ryegrass in the wintertime.  We take retired cows that aren't producing babies anymore; they will be sold for meat. We take them in poor condition, typically in the wintertime when the grass isn't plentiful, and put them on ryegrass and fatten them up," he said. “We sell them as grass-fed beef in the early summer, usually in June, in time for the July 4 meat market. It's a niche, and you get paid a premium for that meat.”

Rushing said " the Lindsey farm has been good on self-sustainability and innovation, being able to utilize livestock production for weed management. I found it very interesting to use animals as part of its weed control."

Rushing said he was impressed with Peyton Places' extensive timber management for their hardwood stand. The Lindseys have 300 acres of hardwoods, including a 35-acre pine parcel where they run goats.

“The goats are eating the underbrush. We started with over 40 goats. They ate the underbrush so quickly,” he said. “We are now down to what I call my maintenance crew of 11 goats with their babies. They keep the forest floor clear and as high as they can reach, which is about head high.  It helps the trees continue to grow by clearing the underbrush and providing natural fertilizer.”

Part of the Farm Family recognition for the Lindseys is their feral hog management.

The hogs “come up on our pastures. They destroy pasture and equipment,” he said. “We've employed government assistance programs and have trapped over 200 hogs in the last couple of years. It's helped to improve the quality of our land."

The University of Arkansas System Division of Agriculture's mission is to strengthen agriculture, communities, and families by connecting trusted research to the adoption of best practices. Through the Agricultural Experiment Station and the Cooperative Extension Service, the Division of Agriculture conducts research and extension work within the nation's historic land grant education system.

Media Contact:
By Lon Tegels
College of Forestry, Agriculture and Natural Resources
University of Arkansas at Monticello
Arkansas Forest Resources Center
U of A System Division of Agriculture
tegels@uamont.edu
870-460-1852