(587 words)
(Newsrooms: With additional art at https://flic.kr/s/aHBqjzUj8c)
(EDITORS: This version corrects an earlier edition of the story, which incorrectly stated that National Farmer’s Week takes place in June. National Farmer’s Market Week is celebrated in August. Sub: par. 2. We regret the error.)

NORTH LITTLE ROCK, Ark. — As summer begins in the Natural State, many Arkansans will turn to farmer’s markets for fresh produce and other farm products to feed their families nutritious meals. To recognize the efforts of local growers and markets, Arkansas Secretary of Agriculture Wes Ward delivered Governor Asa Hutchinson’s proclamation of June 12-18 as Arkansas Farmer’s Market Week. 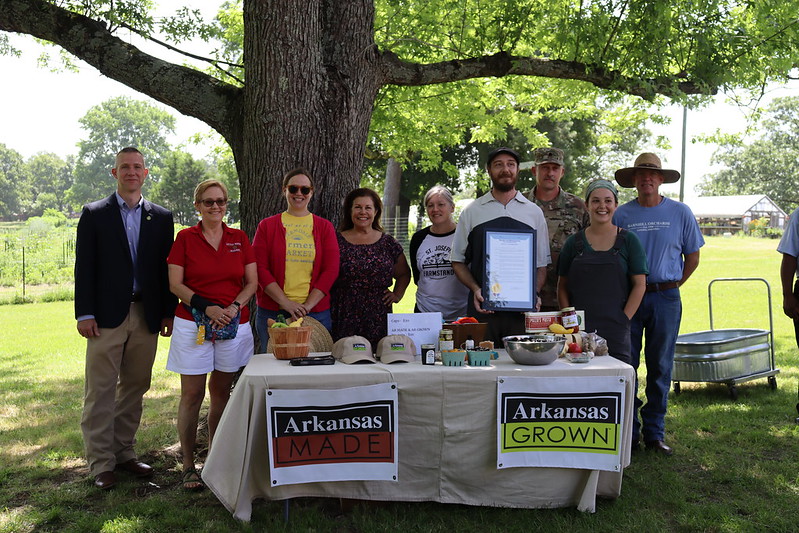 Historically, Arkansas Farmer's Market Week was held in August to coincide with National Farmer's Week. This year, the Arkansas Agriculture Department elected to hold the state-level celebration in June, to both distinguish it from the national event and to better serve Arkansas growers, markets and consumers.

On Tuesday morning, Ward addressed a small crowd gathered beneath shady trees outside the St. Joseph Center Farm Stand in North Little Rock. Farmer’s market managers and local growers, including members of the Arkansas Department of Agriculture’s Homegrown by Heroes program, attended. The program helps farmer veterans to market their products by labeling them “veteran produced.”

According to the governor’s proclamation, there are more than 112 farmer’s markets in Arkansas, with direct-to-consumer sales taking place in nearly all of the state’s 75 counties.

“We continue to see these farmer’s markets grow and be successful, which is great for our local producers and our industry as a whole, to have local healthy food options,” Ward said.

Ward presented the proclamation to Jeremy Adams, executive director of the Arkansas Farmer’s Market Association, who spoke briefly to thank market managers and members of the agriculture community.

“This is really for you guys, the agriculture community in Arkansas,” Adams said. “This is your week, and we are celebrating you. Thanks for being a part of our state.”

Rip Weaver, extension local, regional and safe foods technician, said farmer’s markets are a critical resource for rural communities. Many residents of these areas have worked with extension to create better access to markets for their neighbors, he said.

“For many people, farmer’s markets can provide access to the freshest, most nutritious food available not only within walking distance, but sometimes even by car,” Weaver said. “We continue to see rural communities coming together to organize markets for their residents. Some have even reached out to their county extension agents and our team at the state office seeking advice on the best way to go about this.”

Weaver also said he believes many farmer’s markets will continue to offer flexibilities instated during the pandemic, such as no-contact order pick-up.

“This seemed to be a successful sales alternative for many farmer’s markets, farm stands, and other local food businesses during the pandemic, and I think many won’t just simply toss it aside as we continue to move forward from COVID,” Weaver said. “That would not only be wasted effort on the part of market managers, farm owners, and business operators, but also a potentially lost consumer market. These folks have figured out this sales method, and many still implement it as a way to sell to their customers.”

Rip said he encouraged market managers and others involved in market operations to consider offering SNAP – Supplemental Nutrition Assistance Program, formerly known as food stamps – programs and Double Up Food Bucks programs at their markets “as a way to welcome and encourage even those on the tightest of budgets in your community.”

“Farmer’s markets truly should be places for all people,” Weaver said.