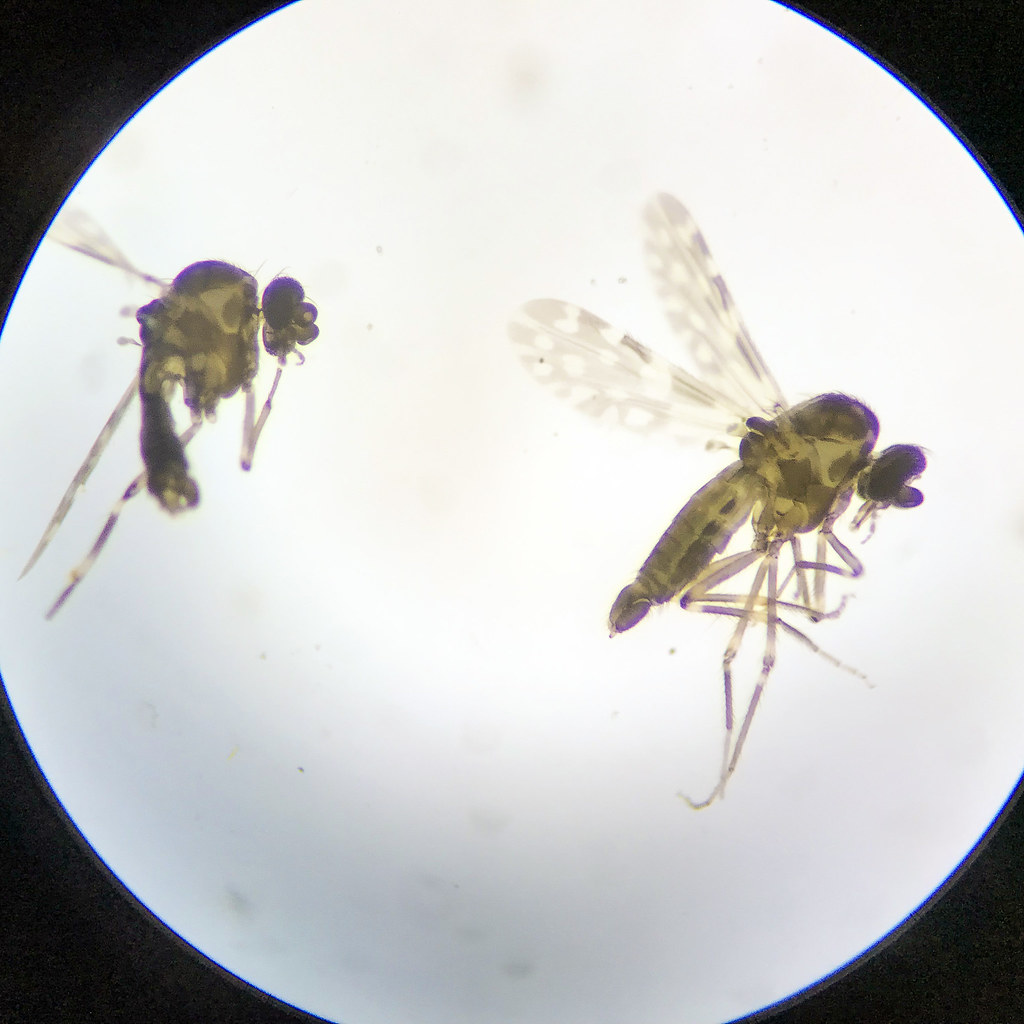 NEIGHBORHOOD WATCH — Native biting midges, commonly known as no-see-ums and seen here under a microscope, are the subject of entomologist Emily McDermott's research on insect interactions. (U of A System Division of Agriculture photo by Fred Miller)

The answer seems to be “no,” but the reasons are unclear. McDermott plans to investigate the matter further this summer.

The Asian tiger mosquito — Aedes albopictus — is native to tropical and subtropical climates. McDermott said it arrived in the United States about 30 years ago and now extends as far north as New York. The pest is a known carrier of disease pathogens, including Zika and Dengue viruses.

McDermott said existing research has shown that the Asian tiger mosquito can out-compete native mosquitoes that prefer the same habitats for laying eggs. The Asian tiger mosquito prefers artificial habitats like old tires, clogged rain gutters or any objects that can hold standing water. But in rural areas where artificial water caches are rare, it will use natural habitats like hollows in tree limbs or roots.

McDermott wanted to find out if the Asian tiger mosquito was having any impact on the larvae of native biting midges, another kind of bloodsucker that breeds in standing water.

Native biting midges include several species, often called “noseeums,” sometimes confused with black flies. “Noseeums are hard to see,” McDermott said. “If you can see what’s biting you, that’s probably a black fly. If not, it’s a biting midge.”

Being bitten by noseeums is no fun, but the good news is that the midges don’t transmit human diseases in the U.S.

To see if the Asian tiger mosquito was sharing water resources with biting midges, McDermott and research associate Cierra Briggs collected water samples from natural and artificial container habitats in search of mosquito and midge larvae.

They found the midges frequently shared pools with native mosquitoes but only rarely with the invasive Asian tiger mosquito.

“This makes sense,” McDermott said. “Native midges and native mosquitoes evolved together and developed the ability to share resources without causing negative effects to each other.”

The midges, like the native mosquitoes, prefer natural habitats. Finding fewer midges with Asian tiger mosquitoes might be attributed to their different preferences in where they lay their eggs. But McDermott said this can’t entirely explain their separation.

This summer, McDermott said she and Briggs will conduct experiments to study the interactions of Asian tiger mosquitoes and native biting midges. They will establish container habitats and allow the midges to colonize them. Then they will introduce Asian tiger mosquito larvae to some of those containers and restrict the rest to the midges.

“We’ll monitor the containers to see if the invasive mosquitoes out-compete the native midges,” McDermott said.

If they see that the midge larvae decline or disappear from the containers containing mosquito larvae, especially if the midges survive in the control containers, the evidence will indicate a negative interaction. Then the question becomes how the mosquitoes eliminate the midges.

“The mosquitoes are either eating all the existing food and starving the midge larvae, or predation is occurring,” McDermott said. The midges are becoming food.

Why do we care

Competition for resources can stress mosquito larvae. Researchers are uncertain whether this reduces the larvae population, but it can affect the health of adults.

“Laboratory research indicates that stressed larvae develop into less fit adult mosquitoes that may not be able to shrug off an infection,” McDermott said. “If there are a larger number of infected mosquitoes, it follows that there is a higher risk of disease transmission.”

Knowing whether the Asian tiger mosquitoes are sharing their larvae habitats with midges or competing for the resources can indicate whether the mosquitoes present a greater risk of spreading diseases to humans, McDermott said.

Different species of mosquitoes are active at different times of day and night, McDermott said. The tree hole mosquito bites at dusk and dawn but will also bite during the day in wooded areas. Another native, the Anopheles mosquito, is common in eastern Arkansas and is a night feeder, biting almost all night.

Asian tiger mosquitoes, which have become more common in northwest Arkansas, tend to begin feeding mid to late afternoon and continue until shortly after sunset.

McDermott said that the most effective way to reduce mosquitoes on your property is to reduce available habitats.

“Remove standing water,” she said. Drill holes in old tires, corrugated downspout extenders or other objects that might hold rainwater for several days. It’s also a good idea to clean gutters and cover rain barrels with lids designed to keep mosquitoes out.

Adult female mosquitoes lay eggs in water soon after a blood meal. The eggs hatch larvae, which change to pupae before emerging as adults. The time in the water varies based on water temperature and mosquito species, but McDermott said five days is a good rule of thumb. She recommends changing the water in birdbaths and water bowls for pets at least every three days.

“Anything you can do to avoid standing water will help,” McDermott said. “Ideally, everybody should take these steps.”

For decorative water fountains or ponds, McDermott recommends using mosquito dunks. These small donut-shaped control products float in the water and slowly dissolve, releasing a bacterium that is toxic to all mosquito species. Each dunk lasts about 30 days, and the products are widely available.