“These are absolutely stunning adjustments in the U.S. cotton balance sheet." -- Scott Stiles

JONESBORO, Ark. — The United States is expected to harvest its lowest number of cotton acres since the 19th century, according to an estimate from the U.S. Department of Agriculture.

“USDA projected this year's harvested acres at 7.13 million,” said Scott Stiles, extension economist for the University of Arkansas System Division of Agriculture. “That would be the lowest since 1868.” 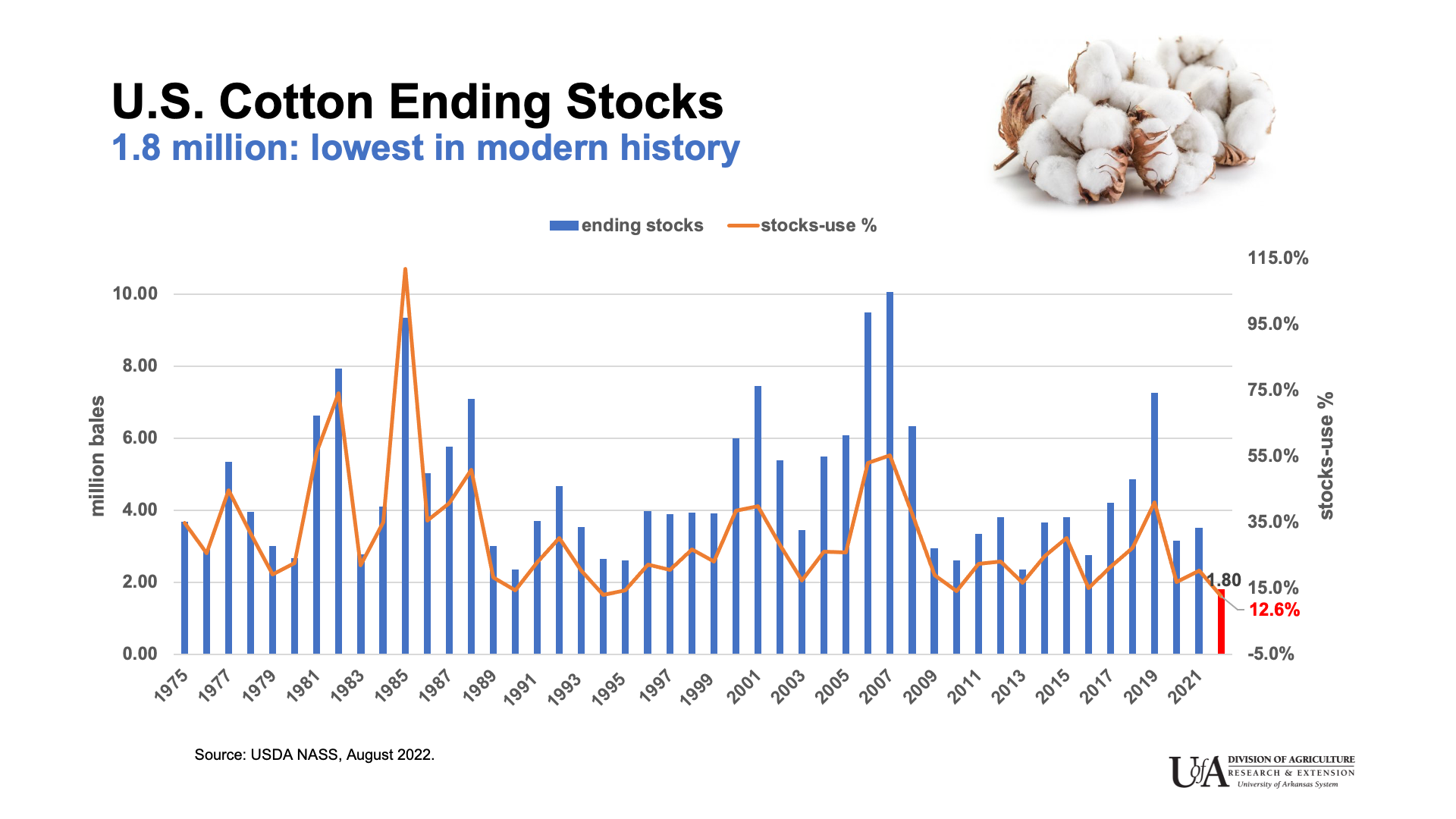 Cotton ending stocks, from USDA/National Agricultural Statistics Service numbers. (U of A System Division of Agriculture image by Scott Stiles)

Stiles said USDA’s Aug. 12 report projected that about 43 percent of U.S. planted cotton acres are expected to be abandoned this year, “largely due to the extreme drought conditions in the southwest region, which includes Texas, Oklahoma, and Kansas.”

Texas was particularly hard hit by drought this year.

“Texas is projected to abandon 69 percent of its cotton acreage this year,” Stiles said. “Texas' planted acreage was 7.1 million. Texas farmers are expected to harvest just 2.2 million, the lowest since 1879.”

Stiles said that ahead of each monthly USDA report, Reuters surveys a group of industry analysts.

“The lowest pre-report estimate for production was 14 million bales. The actual number came in at 12.57 million,” he said. “This was a huge 2.93-million-bale drop from the July production estimate of 15.5 million. Lower production resulted from a reduced U.S. average yield estimate and a 1.4-million-acre reduction in harvested acres.”

Given the lower production estimate, USDA reduced its outlook for 2022 exports and domestic mill use by 2.2 million bales.  The key metric of ending stocks was reduced 600,000 bales this month to a record low 1.8 million bales.

“These are absolutely stunning adjustments in the U.S. cotton balance sheet,” Stiles said.

Friday's report sent cotton futures up the daily limit of 4 cents, with the December 2022 contract closing at just under $1.09.

The daily trading limit was expanded to 5 cents in Monday's trading. Within minutes of the open Sunday night, the December contract traded the 5-cent limit, reaching $1.1359.  USDA currently forecasts a record season average farm price of 97 cents per pound for the 2022 crop.

Bill Robertson, extension cotton agronomist for the Division of Agriculture, said NASS was estimating 500,000 acres of cotton in Arkansas, but “we have 600,000 acres based on boll weevil eradication measurements with lots of new growers and cotton on less-than-optimum ground. This will impact our yield average.”

Irrigation management during this season’s high temperatures will make the biggest difference for growers.

“Cutout,” in the parlance of cotton production, is the point in the plant’s growth during which it won’t support the production of additional bolls.

“An almost ideal September will be needed for the plants to fill and mature bolls needed to obtain the yields and quality we have been accustomed to producing,” Robertson said.