LONOKE, Ark. — For Lonoke County staff chair Keith Perkins, serving the community goes beyond his work for the Cooperative Extension Service. As a pilot, Perkins donates flights to transport people in need of medical care at no cost, and he advocates for everyone to get involved in giving back. 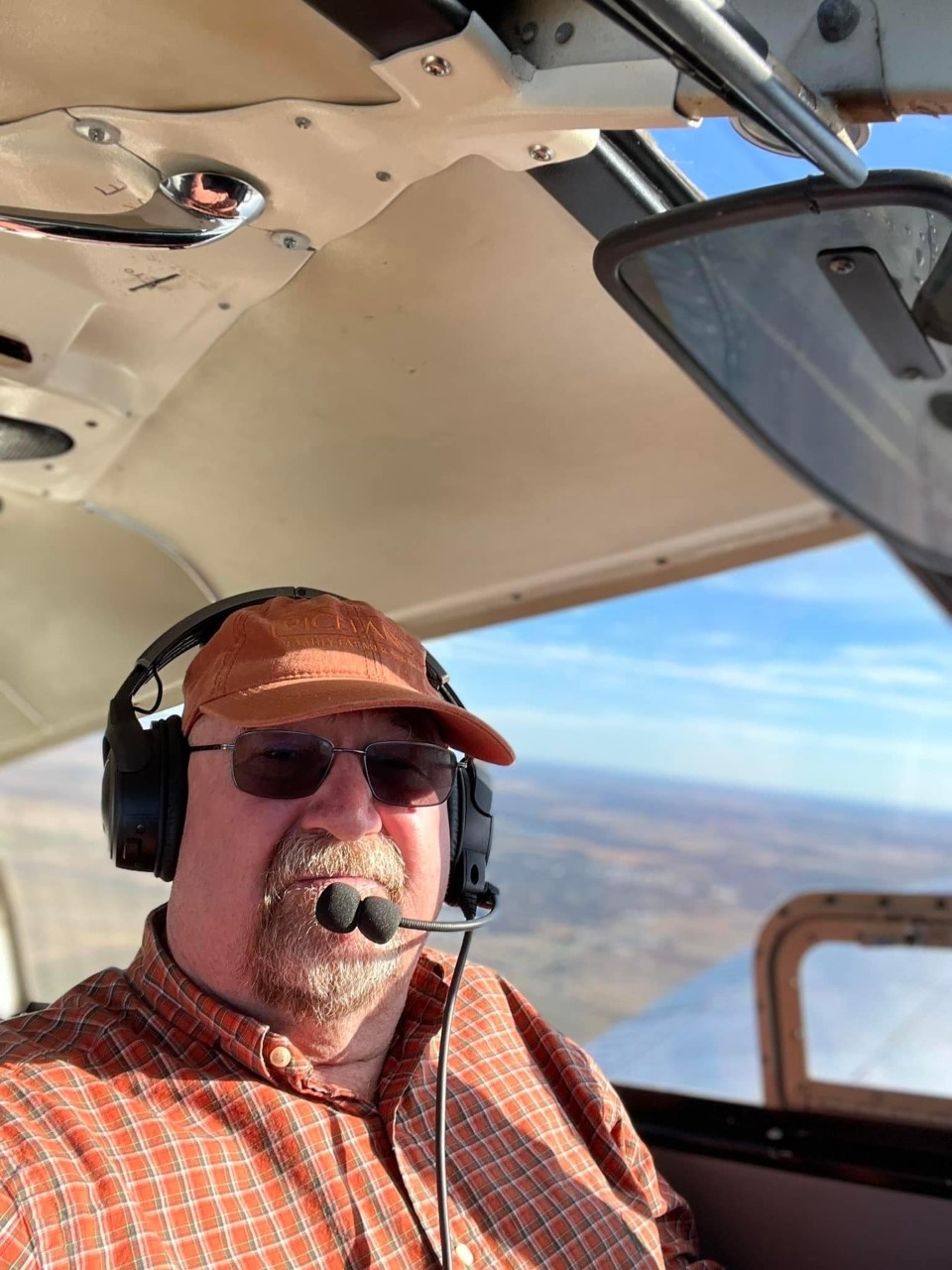 ABOVE AND BEYOND — For Lonoke County staff chair Keith Perkins, serving the community goes beyond his work for the Cooperative Extension Service. As a pilot, Perkins donates flights to transport people in need of medical care at no cost, and he advocates for everyone to get involved in giving back. (Image courtesy Keith Perkins.)

Perkins was born and raised on a family farm in Craighead County, near Bono, Arkansas. Growing up, Perkins had two cousins who worked as agricultural aviators. One of them took him flying when he was 10 years old, and Perkins’ passion for aviation began then.

Three years ago, Perkins’ brother was diagnosed with cancer and had to travel to Cleveland, Ohio for treatment. This meant a 12-hour drive or, if flying commercial, at least 10 hours of travel time, with layovers and stops. Perkins decided to volunteer with Pilots for Christ and Angel Flights, both charitable organizations that provide flights for people in need of transportation for medical care. Volunteer pilots donate the flights at no cost to the people they transport.

“What I see is there’s a lot of people who have medical needs that are not being met in their hometowns who need the assistance,” Perkins said. “Sometimes it’s because of the distance, like with my brother, and the time it takes to get there. Sometimes they don’t have the money to pay for a plane ticket or the expense of driving to those destinations, or even the ability to drive.”

Perkins said he flies for one of these organizations about once a month, and he typically flies half the trip and meets another pilot to fly the other half. He said he frequently flies people to Shreveport, Louisiana, and Longview or Houston, Texas. He has also flown several people to Owensboro, Kentucky.

“Some people have been dealing with their illness for many years, and for some, it’s their first time to have to go for treatments,” Perkins said. “Some are extremely nervous and scared of what they’re facing, while for others, it’s amazing how they are at peace with what’s going on and are able to transfer that peace and understanding to everyone around them.”

Perkins said the people he transports often have a greater impact on him than he does on them. After flying a teenage girl with health problems and her mother to Moberly, Missouri – a stop before they would be flown the rest of the way to the Mayo Clinic in Rochester, Minnesota – they were waiting for the next pilot to arrive when the young woman asked Perkins if she could “pray for us.”

“She prayed the most beautiful prayer, the most sincere and honest prayer that I had ever been a part of,” Perkins said. “I’ve been a Christian since I was 12 years old, but I had never felt the presence of the holy spirit as I did that day when that young lady prayed for us and her. It was just incredible.”

Helping farmers and 4-H members
Perkins said that without agriculture, he “wouldn’t be here today.” Perkins’ mother was from Ash Flat, Arkansas, in Sharp County, and his father was from Bono. They each had siblings who married spouses from Monette, Arkansas, and one day, they all traveled to Monette to pick cotton.

“The story goes that as my mom saw my dad picking cotton, she thought he was a real handsome man, so she picked really fast to catch up with him,” Perkins said. “Once she caught him, they had five kids.”

After graduating from Westside High School near Bono in 1982, Perkins attended Arkansas State University, where he earned both his Bachelor of Science in agriculture business and his master’s degree in business administration. In 1993, he began working at ASU as a research specialist for Tina Teague, professor of entomology for ASU and the University of Arkansas Agricultural Experiment Station. In June 1996, Perkins became a county extension agent in Monroe County. After working as an agent in Monroe County and then St. Francis County, he transferred to Lonoke County, where he has worked as staff chair for the past six years.

“My primary responsibility is agriculture,” Perkins said. “I like being able to work with my producers on taking the best practices information that we have and seeing them apply that in the field. Whether it’s disease or insects, being able to correctly identify what their problem is and the research-based answer for their problem is one of the best things I do.”

As staff chair, Perkins supervises three other agents and two administrative support specialists in Lonoke County. He said he also enjoys working with Arkansas 4-H as part of his role, especially helping youth develop the skills necessary for “life’s highway.”

“Every step along life’s highway is extremely important and extremely challenging, but the rewards always outweigh the negative,” Perkins said. “A lot of the time, our teens just need some encouragement on where they need to go with their life and how best to develop those life skills. The 4-H part of our job is extremely important to help develop tomorrow’s leaders, today.”

Perkins has seen the impact of the 4-H program firsthand: his four children each participated in 4-H as youths. All four were active at county, district, state and national levels and were camp counselors, Teen Stars, and State 4-H Ambassadors. Two were Arkansas 4-H State Officers, three were state record book winners and attended National Congress, and three were National Shooting Sports Ambassadors.

All four of Perkins’ children have since completed their college educations and are now working in careers that use their skill sets – a feat that makes Perkins proud.

“If somebody would ask me my biggest accomplishment in my life, I would say it was mine and my wife’s raising of our children,” Perkins said. “And I’m sure my parents would have said the same thing.”

Perkins said his parents instilled in him the importance of education, as they came from families with much less access to schooling.

“My grandmother on my dad’s side could not read or write, and my dad and my mom were the very first two of their families to graduate high school,” Perkins said. “And then I had two brothers and two sisters, and all five of us were able to get a college degree. They encouraged us and valued that education system.”

Life-saving donations
In addition to flying time, Perkins is also a longtime donor of blood plasma, a liquid component of blood that helps carry nutrients and proteins throughout the body. When his infant daughter was born in 1999 with a respiratory problem that nearly caused her death, she received plasma to help her immune system fight the issue. She was on a respirator in the NICU for 12 days. After Perkins and his wife were able to take their daughter home, he began donating plasma. He did so once a week, sometimes twice a week when he could, for many years.

In early March of 2020, Perkins tested positive for COVID-19 within a week of the first confirmed case in Arkansas. He and four other family members tested positive, but with the most severe symptoms, Perkins was hospitalized for two nights.

Perkins learned that convalescent plasma – blood plasma derived from patients who have recovered from the coronavirus – was currently one of the only treatments that provided relief for some COVID patients. After he fully recovered and received a negative test, Perkins began donating convalescent plasma, making 19 donations over the following year.

An employee at the Arkansas Blood Institute later recommended that Perkins donate both plasma and blood platelets, which are the cells that circulate within blood and bind together to make clots. According to American Red Cross Blood Services, platelet donations are most often used by cancer patients and others with life-threatening injuries or illnesses.

Perkins now donates plasma and platelets once a month, and he said it’s important to him to give back to others, even if he will never meet the person he impacts.

“With plasma or whatever you donate, you may never know or see any of the people that you help,” Perkins said. “My brother has had to have platelets, my wife has had to have blood, and my daughter needed plasma. I have seen firsthand the benefits of receiving something from a total stranger that you’re never able to thank, you’re never able to say, ‘Thank you for what you did, because it made a difference in my life and in my family’s life.’”

“What a blessing that Keith is using his plasma and unique skill set to continue to care for others the best way he can,” Culver said. “Literally going the extra mile is his way of life. I know he would say, ‘It is the extension way.’”

Perkins encouraged people to give back to their communities, in whatever way they can.

“Giving back to others is something that every person can do,” he said. “God doesn’t limit us on the amount of love we have to give – it’s unlimited.”