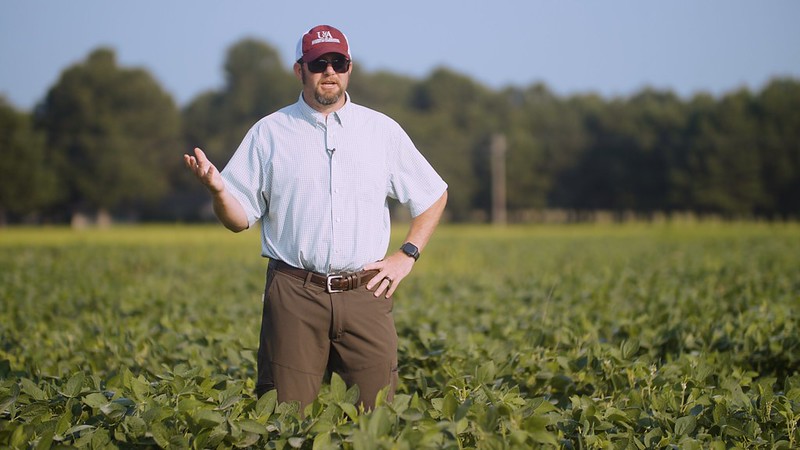 SOY AND SOIL — Trent Roberts, holder of the Division of Agriculture's Endowed Chair in Soil Fertility Research, records a session on managing soil fertility in soybeans for the 2021 online soybean field day. (U of A System Division of Ag photo)

The cost of a cover crop system is comparable to a traditional system with tilling and no cover crop because tilling is taken out of the equation, according to Trent Roberts, associate professor of soil fertility and testing for the experiment station and a soil specialist for the Cooperative Extension Service.

Roberts is holder of the Endowed Chair in Soil Fertility Research for the University of Arkansas System Division of Agriculture and gave a presentation on the cover crops and soil health study in soybean rotations as part of the 2021 Arkansas Rice and Soybean Field Day Online.

“When we implement cover crops, we can only truly realize their full benefit to the production system when we also implement no-till practices at the same time,” Roberts said.

No-till saves about $30 to $60 per acre in labor and fuel expenses associated with tillage, depending on the equipment and number of passes used, he explained.

“That’s a very significant cost that will oftentimes more than pay for cover crop seed, planting and at least a part of the termination cost,” Roberts said.

The study compared soybeans that were grown in fields that had been fallow against those grown after wheat for grain in a double-crop system, and those grown after an assortment of cover crops including cereal rye, black-seeded oats, barley and Austrian winter pea. Researchers also used a 50/50 blend of Austrian winter pea and a “soybean blend” that contained cereal rye, turnip and crimson clover.

The fields with the greatest soybean yields were those grown after the no-till, chemically terminated cover crop, with a three-year average of about 63 bushels per acre. The best cover crop for soybeans was the 50/50 blend with Austrian winter pea and a “soybean blend,” Roberts noted.

The fallow fields produced about 10.5 percent fewer soybeans with a three-year average of approximately 57 bushels per acre.

Roberts noted he often gets questions from producers about the profitability of the wheat-double-crop system. Knowing there is a strong relationship between planting date and yield potential in soybeans, producers have wondered how much yield is lost in Arkansas by waiting for the wheat harvest before planting soybeans, he said.

The study showed that soybeans grown right after a wheat crop produced on average 53 bushels per acre due to the later planting. However, the revenue from the wheat crop could make up for the loss in soybean yield, even with the added inputs, Roberts said.

There were “no statistical differences” in the economic returns of the double-crop system compared to some of the higher-yielding cover crop systems, Roberts said.

The highest returns were seen from most of the cover crop treatments, he added, but they were also very high in the double-crop wheat systems.

“The wheat-double-crop system can be profitable,” Roberts said. “You will lose yield in your soybean due to the late planting but oftentimes the value of a wheat crop that we can grow in the interim will make up for any potential yield loss we see in the soybean.”

An average of soybean and wheat crop values over the past 10 years was used in the economic return analysis to capture potential fluctuations in commodity values over time.

In the no-till cover crop treatment, researchers measured numerical increases in both soil health and soil organic matter, though Roberts said the increases are not statistically significant. Nevertheless, soybean yields are improved in those no-till fields with cover crops.

For those who are new to cover crops, starting out with a system that incorporates soybeans as the cash crop is a good way to start, Roberts said.

“They’re very forgiving because of high seeding rates, and ability to do drilling or plant those high plant populations,” Roberts said. “It gives more flexibility if you do have stand issues.”

Farmers should experiment with what works best on their farm for soybean establishment into cover crops, but planters or drills set up for no-till planting will work best, he added.

“We have used a wide range of planters and drills to establish soybean into both green and terminated cover crops, and you can be successful if you take the time to get the equipment set properly and check at different spots in the field to ensure the seed furrow is properly closing,” Roberts wrote. “That is the struggle planting cover crops in no-till cover crop systems — getting the seed covered and the seed trench closed.”

The U.S. Department of Agriculture’s Natural Resource Conservation Service has funding available to start a cover crop program, Roberts said. The funding, which helps pay for seed and termination costs, can usually help a farmer get started with cover crops on about 300-350 acres.