FAYETTEVILLE, Ark. — The Arkansas Agricultural Experiment Station is taking part in research to fight the battle against herbicide-resistant weeds. 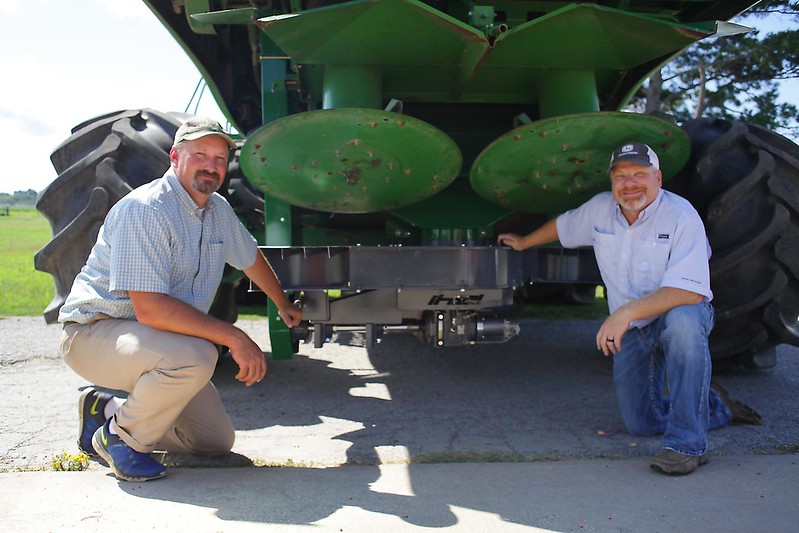 Catching weed seeds before they start a new generation of herbicide-resistant plants is the tactic behind a relatively new method in the United States that weed scientists in Arkansas, Iowa, Kansas and Missouri have partnered to investigate.

“When you take a look at weed management in general, it’s all really centered around soil seed bank management,” said Jason Norsworthy, Distinguished Professor of weed science with the experiment station, the research arm of the University of Arkansas System Division of Agriculture. “If we can drive those soil seedbanks down it’s going to benefit us in terms of the future populations or densities we have in those fields as well as lessening the risk of herbicide resistance evolution and spread.”

The seeds can be caught in the chaff and crushed by a seed mill or laid down in a “chaff line” to consolidate and create a mulching effect, Norsworthy explained.

Since most of the weed seeds are in the chaff, chaff lining calls for a baffle and chute on the harvester that consolidates the chaff in a narrow row 20 to 24 inches wide on the ground behind the harvester. The chutes can be fabricated by farmers of bought commercially.

Seed crushers do as the name implies, catching the seeds and crushing them. But some seed crushers may work better for different kinds of crops and weed species. That is also part of the experiment station study.

Harvest weed seed control was pioneered in Australia by Michael Walsh, associate professor and director of weed research at the University of Sydney. The method has been widely adopted there to capture weed seeds as they come through a combine during harvest, Norsworthy said. Experiments in Arkansas on chaff lining and seed crushing have been conducted at the Division of Agriculture’s Northeast Research and Extension Center in Keiser.

Prashant Jha, professor of weed science at Iowa State University, showed that more than 95 percent of the weed seeds can be concentrated in a chaff line at the time of soybean harvest during a 2021 study in Iowa funded by the Iowa Soybean Association. Jha, who was a graduate student under Norsworthy at Clemson University, said his studies have shown that chaff lining reduces the spread of herbicide-resistant weed seeds.

The weed seeds that were concentrated into rows emerged four to six weeks later than usual, which allowed the herbicides to be more effective because the weeds were smaller, Jha said. By the time the weeds in the chaff line grew to 2-3 inches, the smaller number of weeds outside the rows had grown to 6-8 inches.

Also taking part in the study is Vipan Kumar, assistant professor of weed science at Kansas State University. Kumar, who was a graduate student under Jha at Montana State University, said his wheat and sorghum chaff lining research in Kansas has shown to significantly reduce kochia and downy brome emergence.

“The mulching effect of chaff lining on weed seed banks further depends on the type of crop being used and the target weed species,” Kumar noted.

In Arkansas studies on weed seed control, Norsworthy has also experimented with narrow windrow burning. This method collects the seeds in the chaff on the ground, but it is then burned. Norsworthy said his studies showed a 100 percent kill rate of weed seeds using windrow burning, and he has seen some row crop farmers in Arkansas effectively use this method. But he is researching other methods since burning creates issues that include smoke and carbon dioxide release.

After testing narrow windrow burning, Norsworthy tested the Integrated Harrington Seed Destructor. He said it was 99 percent effective in terminating pigweed seeds when the seed mill did not “clog up” in fields with green pigweed plants. Norsworthy is now testing a Redekop Seed Destructor, which he says does not have as much of a tendency to clog on green Palmer amaranth pigweed plants. A desiccate can be used to help dry the Palmer amaranth since the female plants remain green until a winter freeze, he said.

“The end goal is to protect yield potential in fields and reduce the risk of herbicide resistance,” Norsworthy said.

As weeds like Palmer amaranth, waterhemp, and barnyardgrass grow increasingly resistant to herbicides, farmers face more potential yield losses and more threats to conservation tillage in agronomic crops, according to a 2021 study published in the American Journal of Agricultural Economics.

The U.S. Department of Agriculture National Institute of Food and Agriculture Crop Protection and Pest Management program and the National Corn Growers Association help support this research on chaff lining and seed crushing in Arkansas, Iowa and Kansas. Kevin Bradley at the University of Missouri is also a collaborator on the research.