FAYETTEVILLE, Ark. — A monster that lives by eating the dead is hiding underground, and it has developed a taste for soybeans. 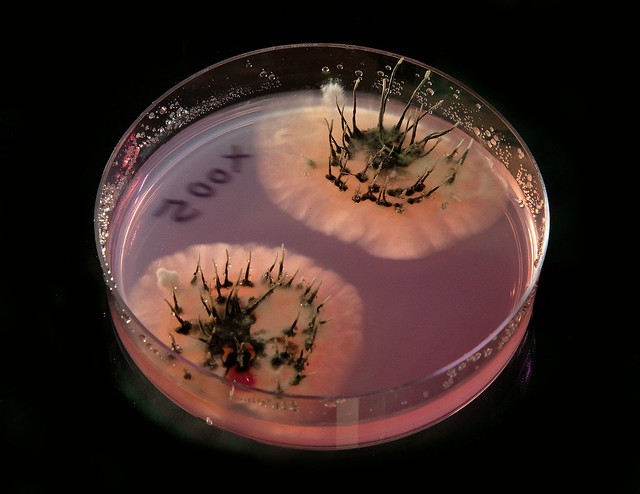 FINGERLINGS — Xylaria necrophora, an emerging pathogen in soybeans that causes taproot decline, is being studied by the University of Arkansas System Division of Agriculture. Because of its reproductive stromata that feeds on decaying matter, the fungus is sometimes called "dead man's fingers." There are other Xylaria that also have this nickname. (Photo by Matthew Rainwaters/Arkansas Agricultural Experiment Station)

For the past two years, Arkansas Agricultural Experiment Station researchers have worked in the lab and in the field to learn more about an emerging pathogen identified in 2014 as the prime culprit of soybean taproot decline — Xylaria necrophora.

Researchers with the experiment station, the research arm of the University of Arkansas System Division of Agriculture, are studying its genetics and testing for resistance and susceptibility in different soybean strains. They have also conducted crop cover tests to develop better recommendations for limiting development of the killer fungus in one of the state’s top three cash crops.

Soybeans generate about $1.7 billion annually in cash receipts for Arkansas farmers. The beans are grown in more than half of the state’s 75 counties. In 2020 there were 2.82 million acres of soybeans harvested in Arkansas.

Terry Spurlock, associate professor and extension plant pathologist for the Division of Agriculture, said Xylaria necrophora so far has not been a serious problem for Arkansas soybean farmers outside of Chicot, Desha and Jefferson counties. But the pathogen has been found in other areas of Arkansas and has caused a stir in Mississippi, Louisiana, Alabama and Tennessee.

“The severity at the moment is highest for growers in the southeast part of the state,” Spurlock said. “I’ve been in a field in Chicot County where the entirety of the field had it.”

Spurlock went on to say the pathogen had been misidentified for years, creating confusion because it looked like something else.

“We knew in 2014 it was something different. We pulled a fungus out of the ground that wasn’t on record for this. A lot of people thought it was black root rot, but that is caused by a different fungus,” Spurlock said.

Spurlock, along with fellow experiment station plant pathologist Burt Bluhm, was one of 10 authors of a paper published by the American Phytopathological Society in 2017 that gave the first description of the causal agent of what has become known as taproot decline in soybean. Other authors included researchers from Louisiana State University, Mississippi State University and Alabama Extension.

The Arkansas cover crop study provides more insight into this plant disease. Since it is a relatively new pathogen, research on management options has been limited.

Signs of the Xylaria necrophora presence are small, fingerlike stromata that some call “dead man’s fingers” on debris from previous harvests, Spurlock said. Easy to overlook, these 1-inch spikey stromata are usually white at the tip and sometimes pinkish when young. They turn black at maturity.

Symptoms of Xylaria necrophora include rotten taproot, yellow foliage, and rusty leaves on the soybean plant. The fungus starts out white in the pith center and turns black after it matures, he said.

If the pathogen is correctly identified, a farmer can work with their extension agent to develop a plan to control it, Spurlock said. The plan would include ways to prevent the infection of disease-free fields and reduce the amount of inoculum from a previous season so the land can be replanted with a more tolerant variety.

In his observations so far, Spurlock has noticed Xylaria necrophora more in fields that have been continuously planted with soybeans with no crop rotation.

However, he said he has also observed severe taproot decline in fields that have been in a corn-to-soybean crop rotation. This was a “frustrating” observation, he said, because a corn-to-soybean rotation can an increase yield by 3 to 4 bushels of soybeans per acre.

Division of Agriculture pathologist Alejandro Rojas said the origin of Xylaria necrophora in Arkansas is not clear yet. However, some historical isolates associated with the same species were collected in Louisiana in gardenia and sugarcane in the late 1930s.

Some specimens in the fungarium were collected in Florida in the 1920s, as well as the Caribbean island of Martinique in 2005, Rojas said. But the actual origin of the pathogen in southern U.S. soybean fields is not clear. It could have been around in nonagricultural environments and then moved to agricultural systems, he added.

In the field, Spurlock said studies have been conducted with rotations from soybean to cotton, soybean to corn, and soybean to soybean, with till and no-till scenarios and fungicide applications. His team is also still researching the use of chemicals for seed treatment and in-furrow or at-planting application.

“We’re taking a multi-faceted, multi-state approach to manage it,” Spurlock said of the ongoing research.

In addition to microbiome studies, researchers have used remotely piloted aircraft to document the pathogen’s impact in comparison to previous soybean harvest yields.

In the lab, Rojas and his team are performing cultivar screenings and evaluating seed treatments to find soybeans that are the most resistant and susceptible to Xylaria necrophora. They also conducted a cover crop study to see what best out-competes the fungus.

Field and greenhouse assays are also going to be conducted to explore the interaction of Xylaria necrophora with different soil types and evaluate detection methods for the pathogen, Rojas said.

Qiurong Fan, research associate on the Xylaria necrophora project, has been collecting Xylaria samples from soybean fields around Arkansas to find out which soybean varieties are the most susceptible, and tolerant, to the pathogen. So far, she has found 10 non-pathogenic and 30 pathogenic isolates of Xylaria in Arkansas.

In the experiment station cover crop study, barley and oats were the most susceptible at the seed level to Xylaria necrophora. The study also found that cover crops at the seedling level were less susceptible, but mustard and radish had the greatest reduction at root mass. Some of the cover crops like rye and winter pea had reduced root damage, Rojas said. The cover crop study provides insight into how the fungus survives from one growing season to the next.

Rojas clarified the results by saying cereal rye and pea are less likely to carry over the pathogen to the next season, reducing chances of a “green bridge” effect, while some other cover crops like barley and oats have the potential to sustain the pathogen.

Rojas also said the Osage cultivar of soybean developed at the experiment station has been “shown to be more tolerant to the disease here in Arkansas and Louisiana.”

Spurlock said he is “almost always going to recommend crop rotation,” but he realizes that not every farmer can afford to rotate. Each farmer’s situation is different, he noted, and they must decide what is the financial impact of taproot decline for them.

“It’s about the profit at the end,” Spurlock said. “You just have to know your fields and know your pathogens and what is your yield penalty.”

Although the fungus could ride on the wind in the dust when harvesting, Rojas and Fan said its spores are more likely to be dispersed by tractor tires, boots or some other direct contact with the soil.