By Lon Tegels
College of Forestry, Agriculture and Natural Resources
The University of Arkansas at Monticello

MONTICELLO, Ark. — Doing forest research can be a lonely occupation. Ask the University of Arkansas at Monticello graduate student Jonathan Kressuk. The sun isn’t even up yet. It’s the first hard freeze of the season in Southern Arkansas. Kressuk is wading through a foot of water, hauling bags of ice into the forested wetlands in Cut-Off Creek Wildlife Management Area near Dermott, Arkansas. 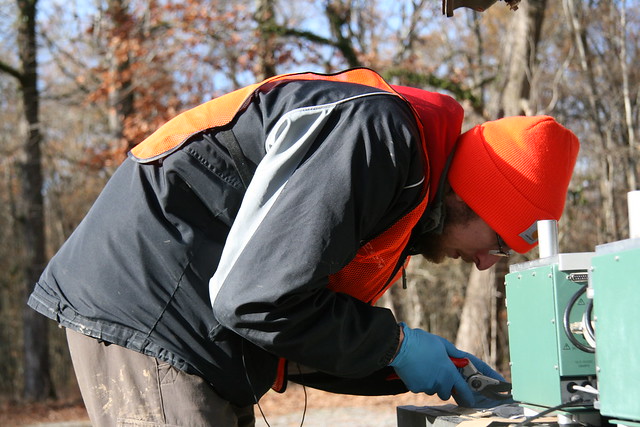 RESPIRATION — Jonathan Kressuk, a graduate student in forest science, measures the respiration levels in the roots of bottomland forest trees in a project aimed at determining the best timing for flooding green tree reservoirs for duck habitat. (U of A System Division of Agriculture photo by Lon Tegels)

His mission is to chill the stems of the willow oak seedlings growing naturally on the forest floor. He will measure tree roots’ respiration, akin to breathing in animals, at various air temperatures.

“Most people think of the leaves of trees taking in carbon dioxide for photosynthesis and releasing oxygen, but roots use oxygen and sugars produced by leaves to get their energy-releasing carbon dioxide, just like humans and animals do when they breathe,” said Ben Babst, UAM associate professor and Arkansas Agricultural Experiment Station researcher with the Arkansas Forest Resources Center.

Kressuk is working with Babst on a five-year research project. Ultimately, it will provide forest landowners and forest managers with information about when it is safest to flood their bottomland hardwood forests within green tree reservoirs without damage to the trees or their root systems. Ducks love flooded forests. Certain species of oak trees provide small acorns that ducks thrive on, along with other ecosystem benefits. The key is to flood the forest, providing an attractive environment for ducks without killing off the oaks that comprise their food supply.

Roots grow too slowly to measure growth in a single day. But root respiration tends to track growth, providing a snapshot. This root respiration reveals how much overall root activity is happening now. Kressuk said he also spent a good deal of his research measuring root growth directly by pulling up the roots from the ground, drying them out, and measuring their weight.

Historically, bottomland hardwood forests used to flood naturally and seasonally. But as European civilization migrated west, much of that natural flooding was eliminated when flood control measures were implemented to allow farming. Decades ago, landowners saw ducks flock to these forests when they were flooded and saw the value to both ducks and duck hunters in making this flooding more reliable.

Evidence now clearly indicates the challenge for landowners and forest managers is to find balance. If land managers flood too soon or drain the water too late in the season, tree roots can’t breathe and eventually die. According to Babst, some bottomland forests have already suffered tree death because of years of constant flooding.

“During the last few decades, people realized that trees were dying in these GTRs. These are forests flooded with the help of small dams to replicate what the hydrology used to be before Europeans settled and built levees along many of the rivers and streams in this region.”

The Arkansas Game and Fish Commission is funding the Arkansas Forest Resources Center research project at the University of Arkansas at Monticello, in part with grant funds from the Pittman-Robertson Wildlife Restoration Program of the U.S. Fish and Wildlife Service. The research aims to determine the best conditions to flood GTRs and how long the water can sit without doing damage to trees. This information will help inform the AGFC’s ongoing efforts to ensure long-term, sustainable management of these limited habitats.

On this day, Kressuk’ s effort involved packing ice around seedlings growing in forest wetlands. He measures the respiration rates — the emission of carbon dioxide — of the roots from seedlings that were chilled by ice or exposed to ambient air temperature.

According to Babst, much is not known about root respiration in trees. But what is known comes from research focused on roots during the growing season, not during winter dormancy. His project involves exposing the roots of willow oak seedlings to decreasing temperatures. His research team is trying to measure how and when root growth and respiration change during the transition from fall to the dormant winter season. Babst’s research tries to determine when root dormancy begins and ends and what kinds of conditions must exist for dormancy to occur.

Those conditions may involve above-ground air temperatures, below-ground soil temperatures and the species of trees being flooded. Some tree varieties handle the water load better than others.

“When root activity and oxygen demand are low, we think the roots will be more protected from the damage ordinarily caused by flooding, which reduces the amount of oxygen available to roots,” said Babst. “If this is correct, and if landowners can time flooding their forests more accurately, they may be able to provide habitat while doing minimal or no damage to the tree roots.”

Babst said his research is made up of two different components, temperatures, and flooding. The next stage is to test whether roots are more protected during winter dormancy. His research team wants to know what happens to root activity during the fall when changes in the day-night cycle and air temperature are happening.

“We had sets of plants that we eased into three different temperatures, 60 degrees, 50 degrees, and 40 degrees Fahrenheit. Soil temperatures here in Arkansas are typically between 40° and 50° F during winter. Once those winter temperatures were reached, we flooded half of the seedlings at each temperature.”

Babst said a lot of forestry professionals already suspected that the timing of flooding is important. Still, it is crucial to have scientific data to support decision-making in the field, where errors could be costly.

The key now, said Babst, is to find the right time to apply water to the forests. He said narrowing down the best window of timing to start flooding green tree reservoirs will require more research, but forest land managers now have something to hang their decisions on instead of merely guessing.

Babst believes soil temperature has a more substantial impact for flooding than what’s happening above ground. “Ideally, we would like to come up with a way for the forest manager to take readily available weather data and plug it into a formula to determine, ‘Is it time yet?’” he said.

According to Babst, his initial experiments were done in a controlled greenhouse. What made Kressuk’ s research special is that he took his experiments to the next level. He moved his root respiration experiments into the field.

Babst said it’s inevitable that different results will be found in the field than in a lab or greenhouse setting. “By manipulating the stem temperature and putting a bag of ice around it, despite the warming air temperatures and plenty of sunlight, does it slow down the respiration in roots by disrupting the phloem function?” Babst asked.

“Phloem is like little pipelines through the stem that deliver sugars made by leaves to roots,” Babst said. “Disrupting that flow of ‘fuel’ to the roots could slow down root activity. If you look at a tree, it looks like it is not doing anything, but it is quite active. If you dig up the root system, it will continue to do what it’s doing, at least for a short period. Jonathan would then take those roots, clean off the dirt, and put them in a chamber and measure the amount of CO2 the roots emit.

“It wasn’t surprising that we see respiration decrease with lower temperatures,” said Babst, “We had a hypothesis, but now we have firm data. What AGFC and our research partners want from this research is actual hard data. So, when they are making decisions, they know they are making the best decisions that are supported by hard evidence.”

Babst partnered with researchers at the U.S. Forest Service Center for Bottomland Hardwoods Research, Mississippi State University and Missouri Department of Conservation to ensure what he learns applies broadly in the region.

Babst said this research is now in its third year, and he expects it to last at least two more years. He adds that there hasn’t been much study of root respiration in southern tree species, especially about the dormant season and flooded forests.

Babst said his greenhouse research so far indicates that the ideal time to begin flooding bottomland hardwood forests is probably somewhere between late November to mid-December to play it safe. To protect the trees, begin draining the water by the end of February. More prolonged flooding killed many seedlings in the study.

“However,” Babst said, “if the low temperature is driving the changes in roots, rather than declaring when the ‘right time’ is to flood, we should be identifying the right temperature conditions. The weather is a little different each year, and so the date when those conditions are reached could change somewhat from year to year.”

He said there are many variables to consider in the field. “This year, we saw a big impact of freezing air temperatures. We need to keep looking to see if that effect of a hard frost is consistent across years. And we need to narrow that window of time when it will be safe to start flooding.”