STUTTGART, Ark. — Arkansas scientists are working to develop rice varieties that are tolerant of Arkansas’ frequent high nighttime air temperatures, a condition that can significantly reduce yields and post-harvest quality. 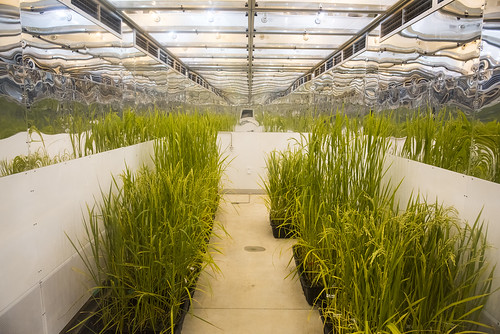 BRING THE HEAT -- These rice plants in a greenhouse growth chamber at the Rice Research and Extension Center, are part of a study on high nighttime air temperatures. (Division of Agriculture photo by Fred Miller)

“We began to do work about twenty years ago to pin these issues down,” Counce said. “We started a series of experiments at the Rice Research and Extension Center and in Fayetteville with Dr. Terry Siebenmorgen.”

Prolonged high night air temperatures during critical physiological stages can reduce the quality and yield of rice, Counce said. Years with unusually warm seasons, like 2010 and 2016, can result in almost catastrophic losses due to reduced pollination and fertilization of rice flowers. At later stages of development, high night temperatures decrease the milling quality of rice.

“It’s not just that there are high night temperatures that cause quality degradation, it is that they occur when the rice is at a certain physiological stage,” said Terry Siebenmorgen, distinguished professor of food science for the Division of Agriculture. “That is when those temps are so impactful, they alter the way the starch is put together in the kernel.”

Siebenmorgen said the result is that rice kernels that are normally translucent become chalky and prone to breakage during milling. The kernels that remain intact do not cook properly for meals or when making cereals and other food products.

Markets are determined by rice quality to a large extent, and when quality decreases it makes marketing difficult, Counce said. In some years, farmers’ profits decline from both lower yields and price markdowns resulting from poor milling quality.

After working for years to determine the physiological and chemical bases of the problem, Arkansas Agricultural Experiment Station scientists are now evaluating cultivars for their nighttime heat susceptibility, Siebenmorgen said.

Growth chambers that can control environmental conditions are used to simulate high nighttime air temperatures to test rice breeding lines and varieties for their tolerance or susceptibility, Counce said. The growth chambers also allow researchers to control the light and carbon dioxide levels, which also play roles in rice plant and seed development. The growth chambers were funded by the Arkansas Rice Checkoff program.

“What we are trying to do is improve our understanding of the varieties and the yield and quality responses of the rice we have to the high temperatures,” Counce said.

This stage of the investigation focuses on identifying breeding lines with genetic tolerance of high nighttime air temperatures, Counce said. “Division rice breeders can then cross those tolerant lines with high-yielding and disease resistant lines to develop improved varieties,” he said.

“This is an excellent step forward in our efforts to find, develop and breed rice that will tolerate high nighttime air temperatures,” said Bob Scott, Rice Research and Extension Center director.