By Ryan McGeeney
U of A System Division of Agriculture
Sept. 20, 2019

LITTLE ROCK – Food and consumer science agents, program associates and other public education professionals celebrated the 50th anniversary of one of the most successful nutritional outreach programs earlier this month, as the Expanded Food and Nutrition Education Program, or EFNEP, turned 50. 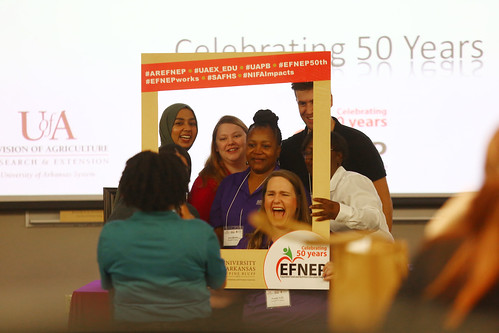 EFNEP began as a pilot program of the U.S. Department of Agriculture in Alabama in 1968, aimed at helping families who relied on food stamps — now commonly known as the Supplemental Nutrition Assistance Program, or SNAP — make the most of their benefits, said Keith Statham-Cleek, a family and consumer science program associate for the University of Arkansas System Division of Agriculture.

“The program came about because we realized, after issuing food stamps, that our participants were running out of food each month,” Statham-Cleek said. “EFNEP helps people stretch their dollar by teaching them how to preserve food safely, increase physical activity and about general nutrition.”

In 1969, EFNEP was permanently funded through the U.S. Farm Bill. The original intent was that the program would train “paraprofessional aides,” who would then reach out to the country’s poorest families in both rural areas and cities, and teach them the fundamentals of creating nutritionally balanced eating habits, pursuing personal development and physical well-being.

In Arkansas, the Cooperative Extension Service operates EFNEP programs in 17 of the state’s 75 counties, most of which are in the Delta region, Statham-Cleek said.

On Sept. 5, about 100 program associates from around the state attended a 50th anniversary celebration at the Cooperative Extension headquarters in Little Rock. Susan Forte, executive director of Houseaboutit, a non-profit community and economic development agency, spoke to attendees in her keynote address.

“I know you go about your work very intentionally,” Forte said. “There’s a barrier to break through, in order to teach people how to eat right.”

Forte said that while the state is facing multiple health crises, agents shouldn’t feel so overwhelmed that they can’t address individual issues.

“Yes, we have an obesity problem,” She said. “But you can be obese without blood pressure issues. Without diabetes.”

The celebration also included a half-hour “historical tour” of EFNEP through the decades, highlighting both the program’s growth and achievements over a half century as well as cultural milestones that marked the passage of that time.

In the afternoon, Arkansas Governor Asa Hutchinson presented a congratulatory letter from his office to Dr. Mark Cochran, Vice President for Agriculture for the University of Arkansas System, in recognition of the EFNEP program and the tens of thousands of Arkansans it has served over the decades.

Doze Butler, dean and director for the University of Arkansas at Pine Bluff School of Agriculture, Fisheries and Human Sciences, was also among several speakers throughout the day’s events to address attendees. As she concluded her remarks, Butler quoted a Chinese proverb, emphasizing the importance of investing in the well-being of Arkansans.