By Bryan Rhodes
U of A System Division of Agriculture

FAYETTEVILLE, Ark. – The U.S. Department of Agriculture has awarded a $400,000 grant to a team of faculty researchers within the University of Arkansas System Division of Agriculture to study the respiratory microbiome and metatranscriptome of beef cattle and their influences on bovine respiratory disease.

The grant, which was issued through the USDA’s National Institute of Food Agriculture, will fund a four-year study focusing on what is widely considered the most common and costly disease facing beef producers. The study will coordinate research conducted at multiple locations within the Arkansas Agricultural Experiment Station, including those at Batesville, Savoy and Hope.

The study is being conducted by researchers within the Division of Agriculture as well as two additional institutions. The Arkansas cohort includes Jiangchao Zhao, Beth Kegley, Jeremy Powell, Jung Ae Lee-Bartlett. John Richeson of West Texas A&M University and Sarah Capik of Texas A&M AgriLife Research are also part of the team. 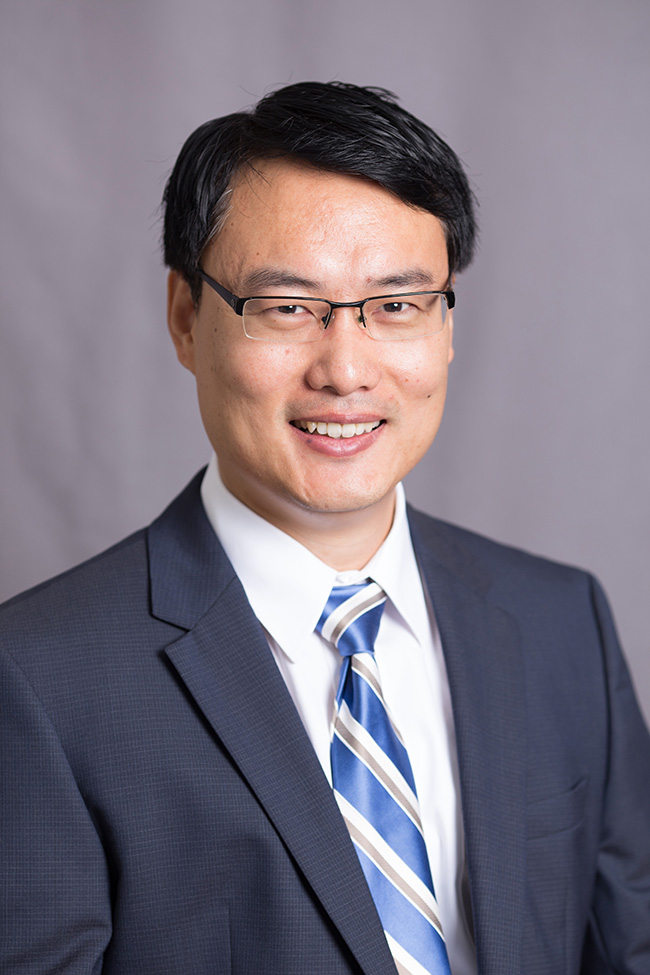 Jiangchao Zhao (U of A System Division of Agriculture image)

"This funding is very exciting and timely," said Zhao, and associate professor of animal science for the Division of Agriculture. "It will allow our strong interdisciplinary team to investigate the correlations between the bovine respiratory microbiome and BRD with a longitudinal design and multi-location cross-validation."

Must of the existing research into bovine respiratory disease, or BRD, has been problematic, Zhao said. Most of the prior research focused on studying cultured bacteria only, while essentially de-emphasizing uncultured bacteria. The process of collecting nasal samples from cows, which used an invasive technique deep into the animal's nasopharyngeal, has also led to much of the existing data being regarded as unreliable. This type of collection was often more difficult and could cause bleeding, thus preventing larger amounts of samples from being taken.

Additionally, Zhao said, the method of acquisition of calves used in previous studies has led to reliability questions. Typically, these animals were brought in from auctions which resulted in researchers possessing very little information on the genetic or health backgrounds of each calf.

"The problem has been there for many years," said Zhao. "But little progress has been made due to many factors, some of which include the limitations to the few cultured bacteria, the lack of cohorts of calves with known backgrounds and the lack of a fast and non-invasive sampling method."

Zhao said the research team plans to use the grant funding to implement new techniques and methods in hopes of making further progress into predicting and treating BRD. The research will focus on both cultured and uncultured bacteria, thus highlighting the additional form of bacteria.

Additionally, researchers will use a short nasal swab over the invasive nasopharyngeal swabs. By using this technique, the researchers will be able to safely and easily collect a large number of samples, while simultaneously making it much easier on the cows.

The final aspect the group hopes to improve upon is through the use of a longitudinal study, Zhao said. This form of data collection will allow researchers to obtain multiple samples from the same animals throughout the duration of their life cycle. The longitudinal study will also allow researchers to gain a solid understanding of each cow's genetic background and health history.

“This longitudinal design is very powerful in that it eliminates many confounders such as genetics and sex,” said Zhao. “This design will also reveal the temporal and spatial dynamics of the bovine respiratory microbiome, which sheds insight into the ecology and mechanisms of the pathobiology of BRD.”

Through this research, Zhao and the group hope to validate their study and allow their findings to be used to help predict BRD in calves using the samples obtained from the nasal swabs. The results of these nasal samples could lead directly towards helping beef cattle producers save money and maintain a healthier stock overall. For example, a young calf whose nasal swab comes back clean would not need to be exposed to expensive BRD treatments. However, if a calf's nasal swab is showing predictive signs of BRD, then it could be diagnosed and treated heavily at a very young age, thus greatly increasing its likelihood of growing up healthier.

“We hope to develop an accurate panel of nasal microbiome biomarkers that could be used to predict and diagnose the onset of BRD with a fast and non-invasive nasal swab sampling method,” said Zhao. “We would also better understand the pathobiology of BRD and hopefully identify some probiotics that could be used to prevent and/or treat BRD to reduce the cost and load of antibiotic treatment.”

This is a four-year project that began Aug. 1, 2019, and runs to July 31, 2023. It involves two animal trials for two consecutive years with 180 cattle each year. This large animal study with a longitudinal design, multi-location and multi-year cross-validation is expected to have a big impact on the beef cattle industry.

To learn about the Arkansas Agricultural Research Station, visit https://aaes.uark.edu/.