By David Bennett
U of A System Division of Agriculture
Sept. 13, 2019 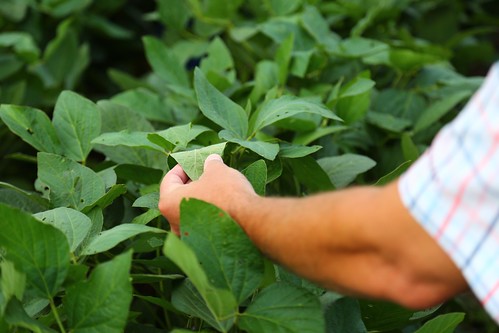 Soybeans
Even as mid-September approaches, there are a lot of late-planted soybeans only now beginning to set pods and bloom.

“Bollworms are in fields – we scouted some beans today that were well above treatment levels,” said Lorenz. “In a lot of cases, we’re finding numbers two or three times above thresholds.

Stink bugs are also hitting soybeans that are at critical reproductive stages, Lorenz said, ranging from R-5.5 to R-6.6, “with numbers running as high as one per sweep.”

“The threshold is nine stink bugs per 25 sweeps up to the R.6 growth stage, when the threshold doubles to 18 per 25. At R-6.5, we terminate insecticide applications for stink bugs,” he said.

Soybean loopers have blown up in spots around the state, he said. “For example, the populations around Marianna are very high,” Lorenz said. “If they hadn’t sprayed the beans on the (Lon Mann Cotton Research) Station there wouldn’t be anything left but stalks and pods. There were five per sweep, and the threshold is 25 percent defoliation.

“Similar to stink bugs, we cut off applications for loopers at R-6.5,” he said. “If your crop is R-5 or so, it will be a while getting to the finish line and you may need an insecticide with residual. Products of choice are Prevathon or Besiege, although that might be a bit expensive. Intrepid Edge, Steward and Denim are also effective but I don’t know how easy they are to find.”

Loren said that methoxyfenozide, marketed under several different brand names, would likely be the cheapest route for many growers.

“Unfortunately, I’ve heard of folks trying to control loopers with a pyrethroid or acephate,” he said. “That can actually make the problem worse. Loopers are resistant to pyrethroids.”

Soybean loopers start feeding at the bottom of a plant’s foliage and work their way up, said Lorenz. “When you see loopers in the top leaves, you’ve waited too late. That means you can’t ‘windshield scout,’ but have to walk the rows and sweep.”

Loopers are migratory, typically originating in Louisiana before moving through Arkansas.

“They’re now at treatment levels in the lower two-thirds of the state,” Lorenz said. “Folks in the northeast part of Arkansas are seeing loopers but aren’t yet treating for them. It seems where they’re worse is where cotton and soybeans are adjacent. The reason for that is the cotton extrafloral nectaries are a source of food for the looper moths. When they have the extra food, it increases egg-laying capacity by around 60-fold.

“We’re also seeing kudzu bugs in soybeans,” he said. “There is a good population in Phillips County. Normally, those are taken out by the Beauvaria fungus, and I’m not terribly concerned.”

“And they just keep coming,” he said.

“We have a lot of younger rice and they’re moving from fields that are drying down into green plants,” he said. “Some rice is just now heading. I’m getting many calls from growers with fields just now at 50 to 75 percent heading. The crop is very late.”

Lorenz said he was aware of fields throughout the whole of the state that had already been treated for stink bugs — often an unexpected expense for growers in any year.

“They treat, and five to seven days later, there are just as many — or more — stink bugs,” he said. “It’s an influx of adults – they aren’t seeing nymphs. So there’s a huge movement of adults coming out of other hosts into the green fields.”

Cotton
Most of the state’s cotton is now past five nodes above white flower, plus 250 heat units, Lorenz said.

“At that point, we can terminate applications for plant bugs,” he said. “However, we still have a lot of green cotton that needs to be protected. Plant bug numbers are bad in late fields and are hard to knock out.

“I get calls saying ‘I sprayed last week for plant bugs and I now have even higher numbers,’” he said. “They believe their chemicals failed. But, again, they’re seeing adults, not nymphs. The plant bugs moving into green cotton are now toughened up. The good news is we’re quickly approaching the last effective boll date, no matter where you are in the state. Once we’ve hit September, it’s a very hard call to continue with treatments.”

“For north Arkansas, that typically means you’re not going to add any yield past August 29,” he said. “For central Arkansas, the date is around September 5, with south Arkansas coming in around mid-September.”