By Ryan McGeeney
U of A System Division of Agriculture
Oct. 01, 2019

LITTLE ROCK — The “store and hold” strategy employed by many rice growers in 2018 has finally paid off, as rice prices rallied in 2019, hinging largely on record prevented planting acreage and general uncertainty about the year’s crop size. 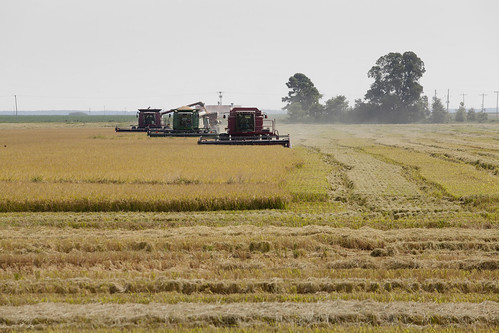 According to a rice stocks report released in late August by the U.S. Department of Agriculture’s National Agricultural Statistics Service, rough rice stocks for five of the country’s six largest rice-producing states, including Arkansas, California, Louisiana, Mississippi and Missouri, all rose over 2018 levels. Only Texas fell in rough rice stocks from 2018 to 2019. Nationwide, August stocks rose from about 23.9 million hundredweight to about 38.6 million hundredweight year over year.

The report compared August stock positions, year to year. Arkansas increased from about 12.4 million hundredweight to about 22.9 hundredweight. Scott Stiles, extension economist for the University of Arkansas System Division of Agriculture, said the change reflects both the size of the crops, year-to-year, as well as market prices.

“Following a sharp cut in 2017 acres, rice prices started to rally,” he said. By the time September 2017 contracts expired, rice futures had traded up to $12.90/hundredweight.

Prices helped spur a recovery in 2018 rice acreage, and a rebound in rice production as well, with the second highest average yield on record — 167 bushels per acre — and fifth-largest production total on record.

Naturally, the rice markets have been affected by external factors, including the weather and global economy, as well. The same intermittent rains that delayed planting — and eventually, harvest — in every other major Arkansas commodity had its way with rice as well. Only this week has harvested rice acreage in the state, at 72 percent, according to a Sept. 30 report from NASS, began to approach the five-year average. Suppressed soybean prices and the ongoing trade dispute with China affected rice marketing decisions as well, Stiles said.

“The declining average acreage has somewhat stabilized our prices, but our production, overall, within any given two-year period, is fairly consistent,” Hardke said. “The yield averages have been mostly greater than 160 bushels per acre the past several years — that’s been largely consistent, and so have our prices.”

“Rice futures have traded from a low of $9.80 in February to a high of $12.52 in July this year,” Stiles said. “Keeping some of the 2018 crop in storage has been a sound marketing strategy this year.”