By Tracy Courage
U of A System Division of Agriculture
Nov. 22, 2019

LITTLE ROCK – New members of the Arkansas 4-H Video Crew participated in an annual rite of passage this week: the Video Crew boot camp. But instead of push-ups and laps, the six teenagers who arrived at the C.A. Vines Arkansas 4-H Center on Nov. 19 found themselves running cables and setting up cameras in the quest for the perfect shot. 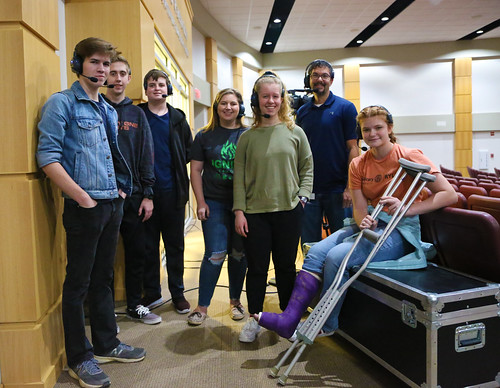 The Arkansas 4-H Video Crew program, now in its sixth year, teaches teens professional video skills and puts them to work on professional projects for the University of Arkansas System Division of Agriculture Cooperative Extension Service. By the time the participants head to college — or into the workforce — they have already gained both work experience and a professional portfolio to show to potential employers.

The program teaches basic technical skills, how to set up camera equipment, how to safely load and unload the video equipment, and how to properly connect multiple cameras to “switchers,” the technology that helps knit multiple video feeds into a single seamless broadcast. Along the way, participants also learn “soft skills” — how to collaborate and work in teams, how to plan and prioritize work and how to lead.

Kerry Rodtnick, media specialist for the Cooperative Extension Service, developed the program in 2015, after having filmed Arkansas 4-H’s largest annual event, State O-Rama, for several years by himself. A three-day conference, State O-Rama brings more than 1,000 4-Hers to the University of Arkansas Fayetteville campus, where they compete in more than 40 events.

With the purchase of a switcher and extra cameras, he was able to livestream events, but he needed additional people for the broadcasts.

“4-H is about hands-on learning experiences through project work,” Blacklaw-Freel said. “When Kerry approached me with this idea, I was new to my position but immediately knew this program had the potential to help youth develop a very marketable set of skills they could parlay into careers in TV, and film.

“Additionally, it’s saved our department money that we have been able to reallocate to other services for youth,” she said. “To my knowledge, it’s the only 4-H program of its kind in the country.”

The first Arkansas 4-H Video Crew began in January 2015 with six students. Some of those first team members are now working in the industry.

William Penny III of Washington County, who was part of the first 4-H video team, now works as part of several video crews in Northwest Arkansas. He is a crew member and backup scheduler at the Walton Arts Center and the Walmart Arkansas Music Pavilion, and also operates cameras at Arvest Ballpark for the Northwest Arkansas Naturals games. Additionally, Penny has landed several freelance jobs as a camera operator for regional cable network television shows.

“The Arkansas 4-H Video gave me the ability to learn so many different hugely valuable skills in the entertainment production industry,” Penny said. “For example, the proper way of coiling cable is an easy way to separate the ‘haves’ from the ‘have nots’ when it comes to skills.

“Without the crew, I would have been thrown into the same boat as everyone else. This has paid dividends in my credibility and reputation as a skilled worker in the area,” he said. “At this point I have been offered so much work that I am currently scheduling all the way into March 2020. The video crew has been a huge part of my education and training in how to be a good and productive worker.”

Penny, who is now attending Northwest Arkansas Community College, assisted with this year’s boot camp, where his younger brother, Weston is part of this year’s crew.

The boot camp is just the beginning. The team will get more training in the spring, and by July, they will be ready to live broadcast the three main assemblies at State O-Rama. The broadcast is shown live at the event itself, and streamed live on the internet for parents and other 4-Hers not present.

The goals of the program extend beyond simple technical and social skills — it also serves to build a confidence in its participants that can carry over into other areas of life.

“The technical and critical thinking skills that I've gained from working with Kerry and the crew have grown my confidence in myself and my ability to learn and do tough things,” said Macie Smith, who attends The Delta School in Wilson. “I'm incredibly grateful that I have access to these kinds of equipment and opportunities and access to the kind of mentor that Kerry is.”

Selection is a competitive. Participants must be a senior 4-Her, between the ages 14-19, show a demonstrated interest in video and film production and be eligible to participate in State O-Rama. The size of the video team is purposely small, ranging from as few as five students to no more than 12 to allow for individual mentoring.

“We want teens who work hard and have proven within their respective counties that they are trustworthy, that they will do what they saw, and that they work well in groups,” Rodtnick said. “This is a very collaborative effort. There’s perks, but there’s also expectations.”

Twenty students have participated in 4-H Video Crew under Rodtnick. He’s written letters of recommendations for many of them and helped connect them with other professionals in the industry.

4-H is the youth development program of the University of Arkansas Division of Agriculture Cooperative Extensive Service. To find out what 4-H clubs are available in your area, visit Arkansas 4-H Online or contact your county Extension office. Follow us on Twitter at @UAEX_edu.