By Nick Kordsmeier
U of A System Division of Agriculture
Nov. 15, 2019

(Newsrooms, with art at: https://flic.kr/s/aHsmJnDpPj)

Sharpley is a Distinguished Professor of soils and water quality with the department of crop, soil, and environmental sciences in the Arkansas Agricultural Experiment Station. Sharpley investigates conservation effectiveness in agriculture related to nutrient management and water quality. 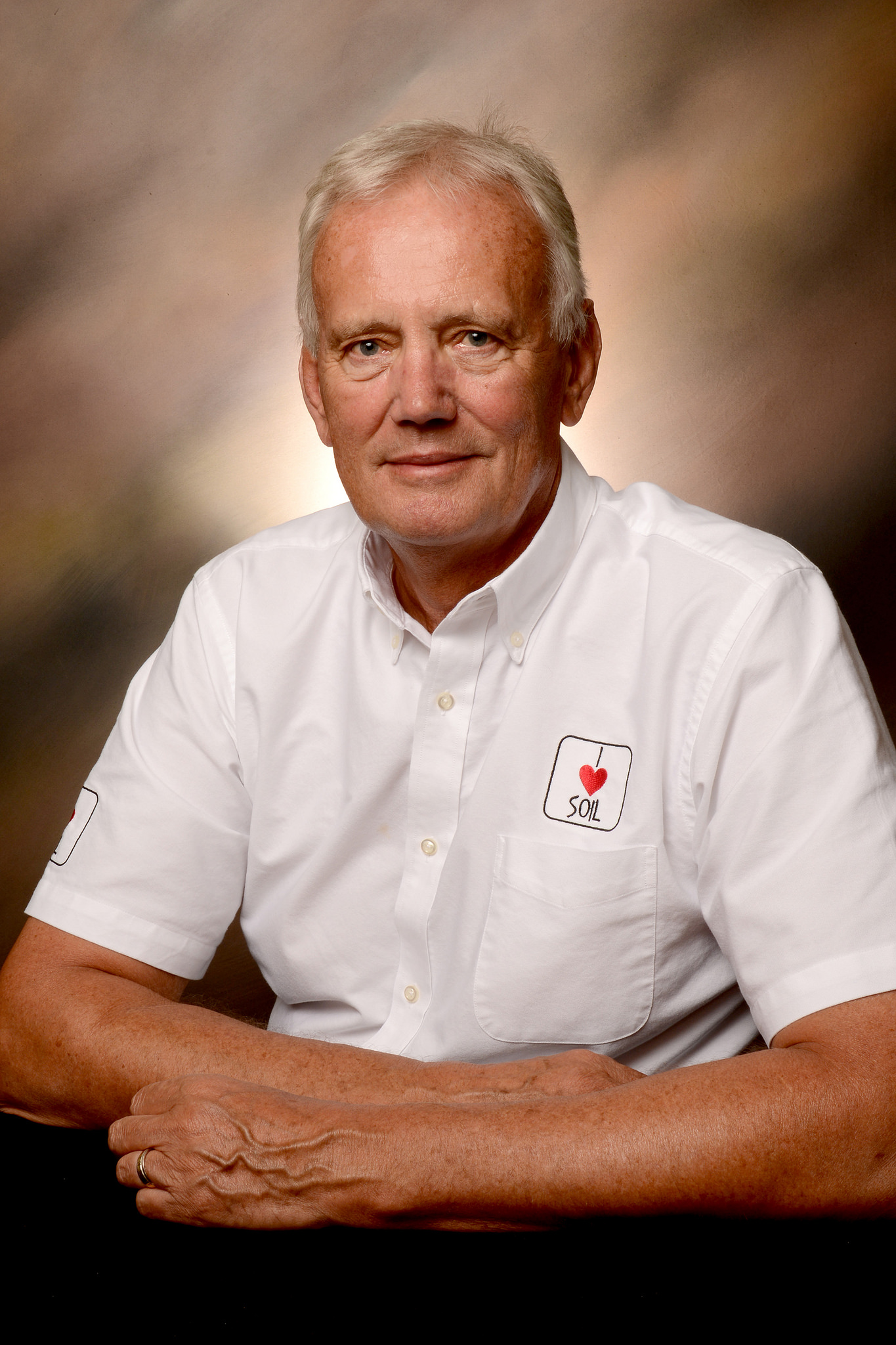 BORLAUG AWARD – Andrew Sharpley, Distinguished Professor of soils and water quality with the department of crop, soil, and environmental sciences in the Arkansas Agricultural Experiment Station, has been named the 2019 Norman Borlaug Award winner by the International Fertilizer Association. (U of A System Division of Agriculture photo)

“I am honored and humbled to receive this award,” Sharpley said.

Phosphorus and nutrient management have been at the center of Sharpley’s research throughout his career. In particular, Sharpley said, the goal has been to engage farmers and provide tools that empower them to participate in practical conservation efforts.

“We need to better manage phosphorus for future generations,” Sharpley said. “Transferring scientific research on the subject to the field enables more sustainable farming that benefits the farmers, society and the environment.”

IFA is a fertilizer association that promotes efficient and responsible production, distribution and use of plant nutrients and has a global membership. The Norman Borlaug Award is presented each year to a person for significantly advancing crop nutrition through research or extension, Sharpley said. IFA chooses recipients on a four-year cycle, alternating between work done in developing countries and developed countries, and between research and extension work.

“This award is really a great way for IFA to give back to scientists, to specialists in extension,” said IFA’s Director-General, Charlotte Hebebrand.

IFA relies on the efforts of these individuals to come up with new advances and disseminate best practices to farmers, she said.

“This is yet another prestigious award for Dr. Andrew Sharpley who is widely recognized internationally as one of the premier experts in the world on the fate and transport of nutrients and other potential contaminants associated with agricultural production,” said Mark Cochran, vice president for agriculture for the University of Arkansas System. “His pivotal work on such issues as the Phosphorus Index and the discovery farm approach has influenced nutrient management worldwide.”

“Dr. Sharpley is the world’s foremost authority on phosphorus management and his work to develop conservation strategies to protect water quality is widely recognized,” said Jean- François Meullenet, senior associate vice president for agriculture-research and director of the Arkansas Agricultural Experiment Station. “We feel very fortunate to have Andrew on our faculty and I congratulate him on receiving IFA’s Norman Borlaug Award.”

“We are delighted to distinguish someone who has worked so tirelessly to ensure that farmers have the right tools and techniques to manage phosphorus properly to grow more crops while minimizing their environmental footprint,” Hebebrand said.

In the late 1990s, at the prompting of the National Resources Conservation Service, Sharpley developed a risk assessment tool to help farmers estimate the possibility of phosphorus runoff from their fields, he said. This tool eventually became known as the Phosphorus Index, or the P Index. Farmers use details about their specific operations along with this tool to locate high-risk areas. The data for the P Index was gathered from across the U.S.

“We coordinated groundwork in about 20 different states, running the same kind of experiments on soil with different levels of phosphorus to come up with the background science to put in this index,” Sharpley said. He also used soil survey information that was already available.

“Really the P Index was an educational tool to help farmers understand which fields were more risky in terms of phosphorus runoff, and therefore adapt their management,” he said.

At the time the P Index was developed, there was less concern about phosphorus runoff than today, Sharpley said. It wasn’t until phosphorus-related water quality issues emerged in the Chesapeake Bay area that the P Index came to the forefront, he said.

The U.S. Environmental Protection Agency and NRCS eventually accepted the P Index as well. NRCS made it a mandatory part of its nutrient management conservation standard, Code 590, he said.

“It became widely used to determine what the appropriate level of fertilizer or manure application was to minimize the risk of phosphorus runoff as well as provide nutrients to the crops,” Sharpley said.

Nutrient levels in bodies of water have decreased as use of the tool spread, Sharpley said. But the broader effect of the P Index was how it changed watershed conservation management.

“It identified those areas of a watershed that were at greater risk,” Sharpley said. “We went from a broad application of conservation practices to a targeted application.”

A more targeted implementation of conservation practices allows for more focused conservation efforts on the riskiest areas, he said, leading to a more efficient use of limited conservation resources.

Another of Sharpley’s research projects originated around 2008, following a trip to Wisconsin.

“I was involved in a review of Wisconsin’s Discovery program and felt that it was a good program that might be adaptable to Arkansas,” Sharpley said.

The Arkansas Discovery Farms program centers on engaging farmers in the conservation process by conducting monitoring and research on farmers’ fields rather than on Division of Agriculture properties, he said.

The Discovery Farms program installed monitoring equipment at participating farms throughout Arkansas to measure nutrient runoff in real-life farming scenarios. Sharpley and co-director Mike Daniels, professor of crop, soil, and environmental sciences with the Arkansas Cooperative Extension Service, worked with farmers to address conservation issues that are important to them.

“We would ask them what do they want to know more about on their farm? What is their main concern?” Sharpley said. “The whole idea of the program is to work with farmers, not tell them what to do, but have a conversation.

“We are involving the farmers in addressing the problem so they’ll feel like a part of the solution,” Sharpley said. “We’re also empowering them.”

Sharpley said that farmers participating in the Discovery Farms program have been vocal supporters, sharing data and conservation practices with their fellow farmers.

“In the bigger scheme of things, it’s really helped extension and our outreach to other farmers,” he said. “It also showed that farmers were being very proactive and involved in addressing these problems.”

Sharpley will be traveling to Versailles, France, to officially receive the Norman Borlaug Award at the 2019 IFA Strategic Forum on Nov. 20, 2019.

“For me, as a researcher, to receive this recognition from the International Fertilizer Association, is very humbling,” Sharpley said. “In the past, many of these awards have gone to fertilizer production technology or crop nutrition yield improvements, so I think it’s a recognition that there is a role in the environment.

“Production and good water quality can go hand-in-hand,” he said.

Sharpley credits his collaborators’ roles in receiving this award. “It’s not just about me or my work,” he said. “It’s more a recognition of that teamwork with the people that I’ve been very fortunate to work with.”

Looking ahead, Sharpley says he’s excited about expanding the Discovery Farms program. Logistical difficulties prevent adding more participating farms, but Sharpley expects the focus of the research will be transitioning.

For additional information about the Discovery Farms program, visit http://bit.ly/AAES-DiscoveryFarms.