Division of Agriculture hosts Council for Agricultural Science and Technology

By Ryan McGeeney
U of A System Division of Agriculture
Nov. 1, 2019

FAYETTEVILLE, Ark. – The University of Arkansas System Division of Agriculture this week is playing host to more than 70 representatives of academic, legal, governmental and other institutions at the 2019 Annual Fall Board Meeting of CAST — the Council for Agricultural Science and Technology. 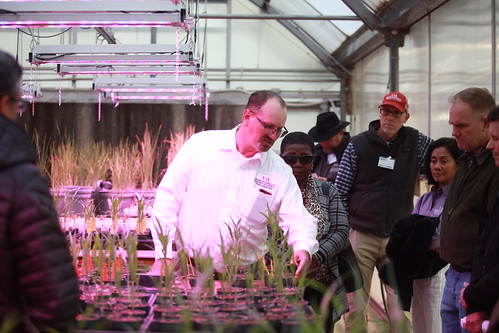 The council, originally formed in 1972, seeks to bring scientists from various agricultural disciplines together in an effort to better communicate their science to the wider world, said Dr. Mark Cochran, Vice President for Agriculture for the University of Arkansas System.

“Over time, the audience for that communication has greatly broadened,” Cochran said. “Originally, it was targeted toward policymakers and decision makers in the public sector. But now we’re in a situation where consumers, citizens and other scientists across the board are involved.”

Cochran serves as the chairman of the CAST Board of Trustees.

Kimberly Nelson, a communications specialist for CAST, said the annual meeting is held at a different member institution each year, and the topics of discussion tend to be a combination of that institution’s research specialties and subjects that seem to capture the current zeitgeist. There are three working groups within the organization — an animal work group, a plant work group, and a food work group.

Tuesday, about 30 attendees were split into plant and animal work groups, and were treated to tours and presentations along those lines.

The animal work group toured the Tyson Research Farm in Hindsville and the Division of Agriculture Poultry Research Farm in Fayetteville. Much of the animal work group’s tours focused on animal health and wellbeing. Billy Hargis, Distinguished Professor of poultry science, described his team’s work to develop probiotics as alternatives to probiotics and custom vaccines to address specific health issues that arise in the poultry industry.

The plant work group toured Marley Farm in Elkins, one of the original participants in the Arkansas Discovery Farms program. Andrew Sharpley and Mike Daniels, both professors of crop, soil and environmental science for the Division of Agriculture, and Jeff Marley, owner of Marley Farm, explained the goals and mechanics of the program, which uses edge-of-field water analysis to identify any excess use of nutrients in row crop, forage and other production.

“It serves the goals of both environmental stewardship and the producer’s bottom line,” Daniels said. “Excess nutrients affect the water supply, but it’s also lost money, just drifting off the farm.”

“We are providing numbers on nutrient runoff from our 12 Discovery Farms across the State, which document the value of conservation practices farmers have invested in,” Sharpley said. “This information has empowered farmers to promote their actions to other farmers, policy makers and the public. Because of this broad collaborative effort, Arkansas is a leader in the region for farmland conservation.”

The plant work group also participated in presentations including an overview of the Division of Agriculture’s crop and horticulture breeding programs, research into seed-borne diseases and the Arkansas Agricultural Experiment Station’s Rice Genetics Lab. Jason Norsworthy, Distinguished Professor of crop, soil and environmental science for the Division of Agriculture, gave the group a tour of the Altheimer Lab Greenhouses, focusing on research into one of agriculture’s most notorious nemeses, Palmer amaranth, commonly known as pigweed.

“It’s really quite a challenge for us, to address the complex issues we have, with everything associated with our biological and physical processes that influence agriculture,” Cochran said. “Today, there are not only varied preferences for food products, but varied preferences for how that food is produced, as well.

“It’s a complex set of sciences, and trying to communicate it to audiences that have a wide array of scientific backgrounds and training,” he said.

Wednesday, Dr. Marty Matlock, Director of the University of Arkansas Resiliency Center in Fayetteville and winner of the 2018 Borlaug CAST Communication Award served as a keynote speaker, discussing the science of agricultural sustainability.

Arkansas Secretary of Agriculture Wes Ward also addressed the full body of the conference Wednesday, highlighting some of the biggest challenges for agriculture in Arkansas, including feral hogs and the approaching opportunity of industrial hemp production.

Ward said that since the Department of Agriculture’s inception in 2005, the department had increasingly sought to work with entities such as the Division of Agriculture to ensure that producers throughout the state had access to the best available scientific and legislative information.

“If it’s related to agriculture, we’re all going to be on the same page,” Ward said.