FAYETTEVILLE, Ark. – Poultry scientists at the University of Arkansas System Division of Agriculture focus a lot of their research on animal health and wellbeing, and those efforts were on display for some 70 agricultural scientists from across the nation during a tour Oct. 29. 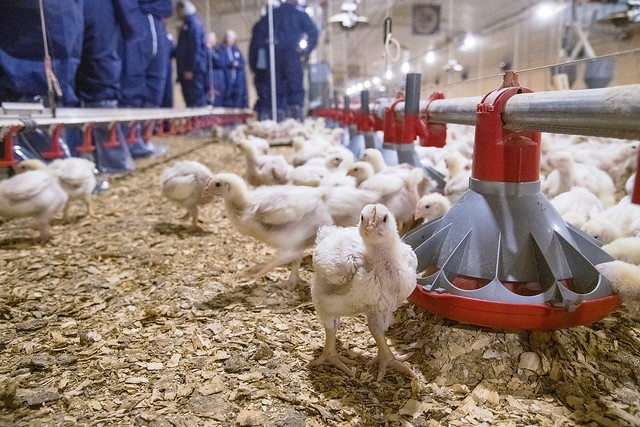 The meeting opened with tours of Division of Agriculture research efforts in plant and animal sciences.

“Hosting the CAST meeting this year provided us an opportunity to showcase our research and how we interact with stakeholders, agricultural producers and the people of Arkansas,” said Mark Cochran, vice president for agriculture for the University of Arkansas System.

Cochran is chair of the CAST Board of Trustees.

“In the animal sciences tour we began with the end product,” Cochran said. “Our poultry researchers in the Agricultural Experiment Station are internationally respected for their expertise in product quality and food safety research.

“From there, the tour backtracked along the supply chain, with demonstrations of how our scientists are working to improve product, food safety and animal health and wellbeing at every stage of poultry production in Arkansas,” Cochran said.

The poultry research tour opened with a visit to a Tyson Foods poultry research farm near Hindsville, Arkansas. CAST members toured a chicken house dedicated to learning how to provide the most natural environment to promote physical and mental health of the birds.

Chip Miller, vice president for live production at Tyson, said the health and wellbeing of their chickens are important to the company. “They’re our livelihood, so it’s important that we take care of our birds,” Miller said.

Karen Christensen, senior director of animal wellbeing at Tyson, said, “Birds that have good health and wellbeing are going to perform well. But there’s more to wellbeing than production concerns.”

The first stop at the Milo J. Shult Agricultural Research and Extension Center was the Experiment Station’s poultry processing pilot plant. Casey Owens, professor of poultry science, showed how the facility is equipped to replicate every stage of poultry meat processing.

These quality issues are becoming more common, Owens said, and a lot of research is focused on finding the causes. The biggest suspects, she said, are genetic or environmental causes.

Owens stressed that such defects in chicken breast meat are not threats to human health but affect consumer experience when eating chicken. Tests with consumer taste panels show that diners dislike the texture and other characteristics of chicken meat with these quality defects, she said.

For that reason, many restaurants and other markets are pressuring poultry processors to sort their products and remove low quality chicken breasts.

Owens said research is developing efficient means of sorting products for quality. The low-quality meat can be further processed for other products where the texture is less noticeable or of lesser importance.

The probiotics are fed to the chickens in their food or water. These direct-fed microbials, or DFMs, reduce or eliminate reliance on antibiotics to promote poultry health, Hargis said.

They also help protect against such illness-causing bacteria as Salmonella, adding a layer of protection against contamination in poultry meat, Hargis said.

In a current project, Hargis said his team is investigating probiotics that improve the energy conversion efficiency for traditionally low-energy feed ingredients. Oil seeds, like soybeans, provide digestible protein but contain energy that is not completely available for poultry digestion.

“We have a product now that gives us a 10 percent increase in energy derived from a total diet,” Hargis said. “That doesn’t sound like a lot until you figure it out across the feed expense for 20,000 birds. Then it’s significant.”

Getting even a 10 percent energy increase from lower-cost feeds can amount to significant savings, Hargis said.

Hargis said the lab has also helped produce custom vaccines aimed at treating specific diseases that can crop up in poultry flocks. These diseases include hemorrhagic enteritis, cellulitis, blackhead and others that have broken out in specific flocks.

“These vaccines have led to a dramatic drop in disease breaks,” Hargis said.

The lab works with the poultry industry and producers to find solutions for gut-related ailments, Hargis said.

After returning to the Don Tyson Center for Agricultural Sciences, where the annual meeting was held, the Agricultural Experiment Station’s poultry gut metabolism team discussed their research on poultry gastrointestinal health.

More than half of the broilers produced in the U.S. are raised in antibiotic-free production systems, said Sam Rochell, assistant professor of poultry science. That makes gastrointestinal health important.

Enteric diseases can lead to decreased performance, including reduced feed intake, reduced feed conversion efficiency and other challenges that affect the health of the chickens and reduce their meat production, he said.

Rochell is investigating nutritional strategies to reduce the impacts of coccidiosis, an enteric disease common among all types of poultry production. This may have additional benefits for helping control necrotic enteritis, which can follow coccidiosis.

One of those studies examines the interaction of vaccines and feed efficiency. Research has shown that the conversion of feed to muscle is hindered by the vaccines used to control coccidiosis. Rochell hopes to find out if adjustments to poultry diet can improve the feed conversion.

In particular, Kwon is researching the progression of conditions that can lead to necrotic enteritis, an inflammation of the small intestine. Symptoms include abdominal pain, cramping, diarrhea, dehydration and fever.

He is investigating the use of direct-fed microbials — probiotics — to influence the gut metabolism to protect birds against the disease.

Kwon is planning to extend his research with healthy and necrotic enteritis-affected birds from commercial broiler farms. He also wants to employ machine learning techniques to identify bacterial groups or metabolites associated with necrotic enteritis and to develop and evaluate strategies to prevent the incidence and severity of the disease.

Sun is also investigating other factors of poultry gut health that play a role in the chickens’ responses to necrotic enteritis. He is extending his study to gut response against Campylobacter jejuni, a common illness-causing bacterium.

“Presenting our research to CAST membership during these tours was an opportunity to cross-connect with our scientific colleagues at other land grant institutions as well as government and industry labs,” Cochran said. “We’re proud of the work we do here to promote safe and secure food production, and to play a role in growing the economy and quality of life in Arkansas.