By David Bennett
U of A System Division of Agriculture
May 31, 2019

McGEHEE, Ark. – While farmers in southeastern Arkansas prepare for the rising Arkansas River, some of their colleagues are coping with the opposite problem: dry fields. 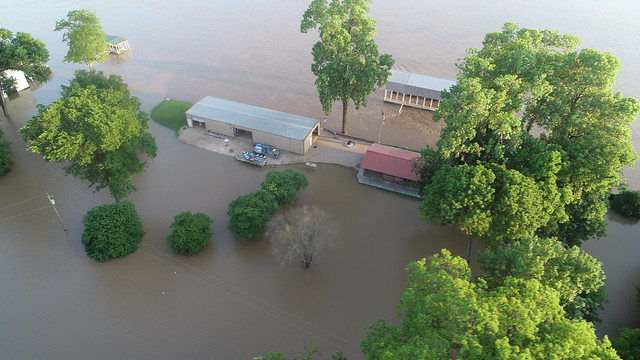 As of Friday’s forecast, the river at Pendleton in Desha County was expected to reach 36 feet on June 6-7, well above the record of 34.1 feet.

“You know, what’s weird is we have all these legit flood worries and there are producers who have run out of soil moisture,”  said John David Farabough, agriculture agent for the Desha County Cooperative Extension office.  “So, they may have to turn on wells to flush the field.”

Farabough said growers in his county struggled to plant with the heavy spring rains. Some producers had finished planting, while others were 50 percent done, he said.

“It’s now to the point of asking is it worth the risk of trying to plant and have it flooded out or, in some cases, the land is obviously going to be flooded out and there’s no decision at all,” Farabough said.

However, “in some spots, we’ve gone from being completely saturated to almost a dust bowl – we haven’t had much cloud cover, the winds have been blowing, there’s been bright sunshine and a lot of ground has dried out so quickly,” he said. “Think about it: we know flooding is coming, we know damage is coming and yet we need some rain to help the crops.”

“What could be very bad is when all this Arkansas River water meets the Mississippi and starts backing up. How fast can that water get out? Debris is also a concern and there are some places along the Arkansas that can hold a lot of water and could have a really negative impact,” he said.

Late May floodwaters along many Arkansas rivers and tributaries are already causing misery. If predictions hold it’s only going to get worse in coming days.

“Yeah, it’s hit hard in many areas of the county,” said Kurt Beaty, agriculture agent for the  Jefferson County Cooperative Extension office, after touring toured Pine Bluff and surrounding areas this week. “Riding over the bridges, it becomes obvious how serious this is. Some conservation reserve program fields are already flooded.”

Farther north, at the very southern end of Phillips County, “there are difficulties with the pumps at the Graham Burke Pumping Station on the White River,” said Robert Goodson, agriculture agent for the Phillips County Cooperative Extension office. “That’s led to a lot of flooded cropland, a lot of prevented planting situations. Most of the water there won’t be gone at least through the middle of June – that’s at the earliest.”

There’s also a lot of seep water along the Mississippi River. “It’s just a guess but I’d say around 20,000 acres of cropland have been affected,” he said. “The water is coming from the ground up all the way from Helena to Snow Lake. There are some spots where there is water flowing artesian well-style because of the high water.

“The backside of the levee is covered up. All the cows are either at the base of the levee or on the outside portion,” Goodson said. “Some pastures have been lost.”

As of May 30, “the Mississippi River is falling pretty fast in Helena – maybe three or four feet to below 39 feet,” Goodson said. “But once you get down to the spot where the Arkansas River meets the Mississippi, it’s rising for obvious reasons.”

Back in Jefferson County, around Pine Bluff, the Arkansas River is forecast to crest at 51 feet on June 5-6, just short of the record 52.1 feet set back in 1943.

During the week of May 20 “they started putting sandbags out in some places. I spoke with a farmer who had been putting sandbags around his house, which is near the river,” Beaty said.  “Everyone I talk to says this is the worst flooding incident they can remember – and that’s saying something.”