By Mary Hightower
U of A System Division of Agriculture
@AgWriterArk
May 24, 2019

LITTLE ROCK  — Arkansas’ brief rally in the number active cotton gins has ended, as open gins declined from 33 to 28 between 2017 and 2018, according to the National Agricultural Statistics Service. 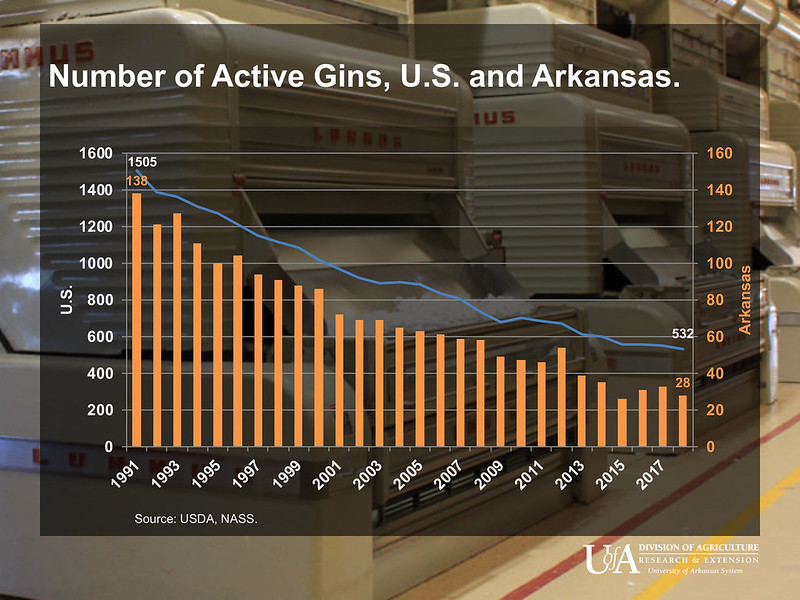 “The trend of gins increasing with cotton acreage stopped last year,” said Scott Stiles, extension economist for the University of Arkansas System Division of Agriculture. “One reason is attributed to low cotton seed prices. With prices at decade lows, many ginners feared they couldn’t cover their operating costs.

“Ginners frequently comment on smaller seed size in today’s cotton varieties, which reduces the quantity of seed per ginned bale,” he said. “Twenty-five years ago, it was common to net 800 pounds of seed per bale. Today, that number is closer to 600 pounds. This 25 percent decrease over the last 25 years has been a direct hit on a gin’s key revenue stream.”

“The cotton acres however continued to rise for the third straight year,” he said. “Now, some gins are reaching their capacity and turning away additional acres. In 2019, we'll see at least one new gin operating and one existing gin return to operation.”

Arkansas growers had planned to increase cotton acreage this year to 580,000 acres, up 95,000 acres from last year.

“Whether the state total reaches 580,000 acres, remains to be seen given the weather challenges this spring,” Stiles said.

According to Monday’s NASS report, 50 percent of Arkansas’ cotton had been planted, compared to 87 percent at the same time last year and the 83 percent five-year average. However, that 50 percent was up from just 25 percent during the previous week.

“In this month’s USDA ‘Oil Crops Outlook,’ U.S. cottonseed production was forecast 23 percent higher in 2019—20,” he said. “This was based on expectations of higher yields, harvested acres and production. The U.S. average cottonseed price was forecast lower at $145 per ton, reflecting relatively lower prices for competing protein meals in 2019-20.

he said. “The soybean supplies are really heavy right now and will likely remain so for the balance of this year – maybe for the next two years.

The Division of Agriculture is one of 20 entities within the University of Arkansas System. It has offices in all 75 counties in Arkansas and faculty on four system campuses.