By Fred Miller
U of A System Division of Agriculture
May 17, 2019

FAYETTEVILLE, Ark. — On a partly sunny afternoon in May, Bryson VanCleve and his father, Garry, pulled a trailer loaded with produce from three west Arkansas farms into the Travel Center gas station off Interstate 40 at Ozark. 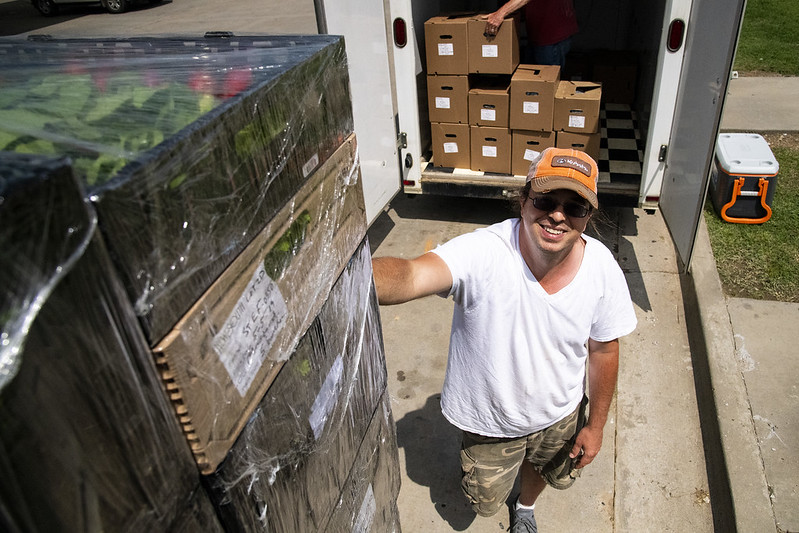 Inside, locals and savvy travelers were eating at the Hillbilly Hideout Restaurant. But the VanCleves were there to transfer their load of vegetables to the New South Produce Cooperative truck driven that day by Jon Warren.

Four years ago, Garry VanCleve was looking to retire from his south Arkansas trophy business and turn the operation over to his son, Bryson. But Bryson didn’t want to sell trophies.

He wanted to farm.

So, the trophy business was converted to a naturally grown produce operation located about 5 miles south of Mansfield. It worked out well for a number of reasons, not the least of which was that the family could live and work together. “I like being close to my grandson,” Garry VanCleve said.

Something to Eat Farm belongs to Bryson VanCleve, technically, but it’s a family operation. Bryson, his wife Jill, father Garry and mother Mary all have a hand in production. Even 7-year-old Jedidiah is known to get his hands in the dirt.

Farmer-owned New South Produce Cooperative is one of three Arkansas agricultural ventures that received a USDA Value-Added Producer Grant that helped get the coop up and running.

The $24,000 grant, received in 2017, allowed New South to invest in marketing, said Peyton Warren, central Arkansas regional manager for marketing and communications. “We used it to purchase van wraps with our logo, t-shirts, anything to build a brand,” she said. “We wanted it to be something you’re excited to see.”

The grant also helped fund an event in which about a dozen restaurants prepared sample menu items with produce from New South Cooperative members. Visitors got a taste of naturally grown and organic produce from member farms.

“Now people stop us in gas stations to ask us about our produce,” Warren said.

Ron Rainey, extension agricultural economist for the University of Arkansas System Division of Agriculture, said Value-Added Producer Grants are aimed at farmers who want to get out of the practice of growing their crops as commodities under contract to a wholesale distributor.

“USDA statistics show that American farmers make about 14 cents of every dollar from the cost of food,” Rainey said. The rest goes to food distributors, groceries and restaurants.

“By changing their operation from a commodity focus to producing a differentiated product, they can command price premiums in the marketplace and sell directly to consumers, farmers can go after the middleman’s share to get a higher portion of that final dollar,” Rainey said.

Getting the word out

Iowa State partnered with Rainey, who directs the Division of Agriculture’s Southern Risk Management Education Center, to promote the grant program in Arkansas and other southeastern states. Rainey and the center are well known throughout the region and he has contacts in the southeast. He seeks to connect Iowa State Agricultural Marketing Resource Center with farmers and ranchers across the southeast region.

“On the one hand,” Rainey said, “farmers who sell directly through locally grown food programs can manage some of the fluctuations of the agricultural market prices. On the other hand, there are risks in entering value-added markets.”

The mission of the Southern Risk Management Center is to help farmers identify and minimize the risks of value-added enterprises and to improve the benefits.

The USDA Value-Added Producer Grants have become another tool for promoting CSAs in rural communities.

The USDA grants are well suited to that approach. Besides New South, Value-Added Producer Grants in Arkansas were awarded to a rice producer and to a livestock cooperative.

And New South has diversified both its membership and its markets. Since beginning with eight produce growers in 2014, the cooperative has grown to 24 members and 18 contractors, Warren said. Among them, in addition to the vegetable growers, are fruit and beef producers.

She said the cooperative is also adding jelly bakers, coffee growers and confectioners to the line of products they offer.

Each week, the growers bring their products to one of the cooperative’s aggregation sites, as the VanCleves did that afternoon at Ozark. Besides their own produce, they brought vegetables from neighboring farms, Red Rooster Farms and Joe’s Local Produce, to the collection point. Warren said that practice is common among their membership.

As for markets, New South sells directly to consumers Warren said. Customers pay a subscription fee and each month they receive a box full of produce, fruit or meat.

The cooperative also sells its crops through groceries and restaurants throughout Arkansas and neighboring states, Warren said.

Selling by subscription provides up front capital for member growers, providing the money they need to get their crops planted and cultivated at the beginning of the growing season.

“We sold our produce at a farmers market for two years after we got started,” he said. “Then we joined New South and it’s been better.”

The cooperative offers a consistent market and the advantage of that upfront capital. He’s so sold on the concept that he now serves on the New South board of directors.

Rainey said he wants to increase awareness of value-added resources for farmers in Arkansas and the southeastern United States. “And we want to increase the number of applicants for Value-Added Producer Grants across the region,” he said.