RockCityHacks: Up all night solving the world’s challenges
skip to main content
News - 2019

RockCityHacks: Up all night solving the world’s challenges

(Newsrooms: with art at https://www.flickr.com/gp/uacescomm/sJQ063 )

FERNDALE, Ark. – Faces lit by the glowing screens of laptops, more than two dozen Arkansas high-schoolers tested their coding skills in a competition to solve their choice of five challenges at the first RockCityHacks hackathon.

With most hackathons being out-of-state and out of reach for many students, RockCityHacks was designed by the Cooperative Extension Service to give students in grades 9-12 an accessible in-state hackathon experience. It was hosted at the C.A. Vines Arkansas 4-H Center in Ferndale. 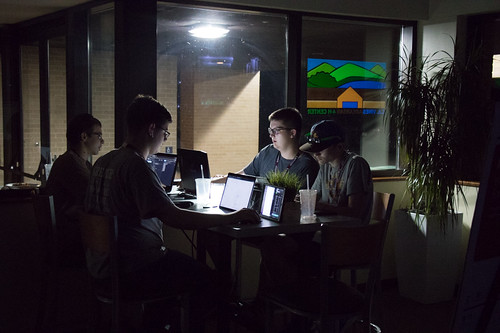 LIT -- Faces lit by glowing screens. Coders work into the wee hours. Scene from RockCityHacks, a hackathon for Arkansas high school students, held April 27-28, 2019 at the C.A. Vines Arkansas 4-H Center. (U of A System Division of Agriculture photo)

The 28 participants formed eight teams. When they weren’t trying to code a solution, the teens took part in workshops to help sharpen their skills and learn about different applications of coding technology, including virtual reality.

Fueled by in part by doughnuts and adrenaline the teens tackled real-world use cases that included food traceability, feral hog trapping and creating a paperless absentee ballot voting system.

Daniel Burnett, a student from eStem in Little Rock, said he was invited by his fellow Quiz Bowl teammates to join them for the hackathon. “It honestly sounded like a bunch of fun,” he said. Looking at his lanyard, covered with University of Arkansas System Division of Agriculture logos, he added, “I wasn’t expecting agricultural problems.”

His team selected the food traceability use case. When asked what the team’s first step would be to attack the problem, he said, “lunch.” After lunch, the team would “try to find as much background information as possible. Afterward, we’ll move on to the logistics and get into the actual programming,” said teammate Jeremy Choh.

Karma Turner, computer science teacher from Lake Hamilton - and the first recipient of the Arkansas Computer Science Teacher of the Year - brought seven students with her. This was the first hackathon for her students.

“When I saw this, we didn’t know what to expect,” she said. “When I say, let’s go try something new, they jump in and say, ‘let’s go see what it’s about.”

“I hope they are more aware of technology in agriculture, that they learned a little, that they had fun, and that they will join us again next year,” Robinson said. “It wouldn’t have been possible without the dedicated teachers, parents, and volunteers, and we greatly appreciate all of them.”

Karen Watts, extension digital and information technology innovation manager for the Division of Agriculture, said that “Seeing all of the students collaborate and having fun while learning was an amazing experience to see firsthand. Giving students the opportunity to work as a team to solve real world problems, while meeting other students and bonding is worth every bit of the time to put it together.”

Once the competitors found their solution, they had to give a presentation about their work to the judges and the rest of the audience. The three judges were web developer Jeremy Kratz, Elizabeth Pierce, chair of Information Science and associate professor, and Sam Boyster, chief operating officer for the Cooperative Extension Service and former programmer for FedEx, Lockheed Martin and others.