(686 words)
(Newsrooms – With charts and a photo at https://flic.kr/s/aHsmC4hLUg )
Download Word version

JONESBORO, Ark. – The expected large increases in corn and cotton acres in Arkansas in Friday’s Prospective Plantings report are the bright spots overlaying the uncertainty surrounding trade talks between the U.S. and China, and the long shadow the trade dispute has cast over American soybeans. 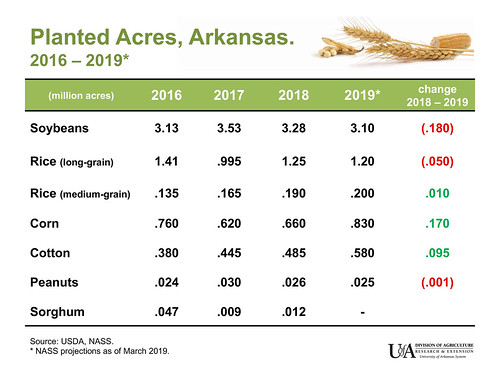 Slide showing change in planted acres in Arkansas from 2018-2019 according to the 2019 Prospective Plantings report. (U of A System Division of Agriculture illustration by Scott Stiles)

The annual report from the National Agricultural Statistics Service of the U.S. Department of Agriculture, said Arkansas farmers were expected to pull back soybean, rice and peanut acres. Grain sorghum was being dropped from the report due to the small number of acres.

“Soybean prices are down a lot over the past year, due to a number of factors including a big U.S. and world supply, and that our exports are down a good amount from last year, largely due to reduced sales to China,” said Scott Stiles, extension economist for the University of Arkansas System Division of Agriculture.

“What’s really the news item here is ‘how are the trade talks going?’” he said. “The U.S. has a trade team in China this week and their Chinese counterparts will be in Washington next week. It’s positive that we’re still talking to each other, but the commodity markets want this resolved. What’s keeping grain prices in a lull is the lack of a finalized trade agreement.”

Details from this year’s report:

“The futures market reaction has been very negative to the report with new crop prices finishing the day down 14 to 16 cents following the report,” Stiles said.

Cotton
Although U.S. cotton acreage is expected to be 2 percent lower than a year ago with 13.78 million acres of cotton expected to be planted, Arkansas producers plan to up their acreage 20 percent to 580,000 acres. Last year, growers counted 485,000 acres planted a year ago. This would mark the fourth consecutive year of increasing cotton acreage in Arkansas and the highest acreage since 2012, when there were 595,000 acres planted.

“The NASS Arkansas cotton acreage projection falls in line with the National Cotton Council’s results released in early February which indicated 555,000 acres would be planted this year,” Stiles said. “In contrast, the Cotton Council expected U.S. cotton acreage to increase this year to 14.45 million—up from 14.1 million last year.”

Soybeans
Arkansas producers plan to plant 3.1 million acres of soybeans, down 5 percent from last year when 3.28 million acres were planted.

“This came in just over 1.5 million acres lower than the average pre-report trade estimate,” Stiles said.

Rice
Arkansas producers are expected to reduce rice area by 40,000 acres or 3 percent to 1.401 million.

“All of this reduction is attributed to a 50,000 acre decline in long-grain rice,” Stiles said. “Medium-grain acres in Arkansas are expected to increase a third straight year by 10,000 to a total of 200,000 acres.”

U.S. rice acreage is expected to be 3 percent lower this year with 2.87 million acres planted compared to 2.946 million last year.

“It’s not a surprise to see more corn and cotton, given current soybean prices. We knew bean acres would be off some,” he said. “In the end, rice acres may not change much at all from last year. The weather over the next month or two, and to some degree crop prices, can still affect planting.”

Stiles explained that soybeans were generally the alternative on rice acres for Arkansas growers and the acres would likely stay in rice if the soybeans “didn’t pencil out.”

“By comparison, November soybean futures during the first two weeks of March are a full $1 dollar per bushel less than a year ago and basis is much weaker as well,” he said.

For more information on these programs, visit www.uaex.uada.edu or contact your local county agent.