By Ryan McGeeney
U of A System Division of Agriculture
March 15, 2019

LITTLE ROCK –  The University of Arkansas System Division of Agriculture is helping cattle producers in the state gain a leg up in their marketing efforts through education on the industry’s best management practices for cow-calf operations. 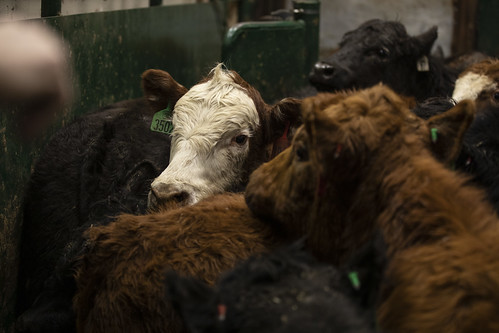 The Natural State Preconditioned Calf Program teaches participating producers the steps for preconditioning their calves before auction, said Shane Gadberry, professor of ruminant nutrition for the Division of Agriculture.

The program offers participants the opportunity to receive certification in beef quality assurance, either through an online course or through a classroom-centered BQA class, taught at Cooperative Extension Service offices in counties throughout Arkansas.

“We really encourage the latter, because in that classroom setting, you’ll get interaction with other producers, and answers to questions that may not otherwise come up in online training,” Gadberry said.

The training emphasizes the importance of establishing a known health history for calves through vaccination, castrating young male calves and retaining the calves for at least 45 days after weaning before taking them to auction.

“If I’m a cattle buyer, and I purchase a calf out of that sale barn that has no known health history and hasn’t been castrated, the chances of that calf becoming sick are three times higher than if it’s been pre-conditioned,” Gadberry said. “Those cattle that get sick add costs, through reduced growth rates, through increased labor —they have to be gathered and sorted from the herd — and then we have to treat them with some very expensive antibiotics.”

Toward a better reputation

The program, initiated by the Division of Agriculture in June 2018, was modeled after other preconditioning programs that have existed for decades. It is, in part, an effort to combat a long-running reputation of higher-than-average calf morbidity associated with cattle in the Southeastern United States — a perception that was reflected, Gadberry said, in the results of the Division of Agriculture’s 2018 Arkansas Beef Assessment, which surveyed producers, buyers and other cattle industry professionals.

“Either through data or perception, buyers have the idea that there’s greater morbidity associated with cattle out of the Southeast,” Gadberry said.

The Natural State Preconditioned Calf Program is being marketed under the “GoGreen” banner and features green ear tags for calves at auction that have been preconditioned. Gadberry said about 6,000 tags have been distributed through Cooperative Extension offices throughout the state, with about 2,000 of those distributed to Carroll and Boone counties, two areas known for their cattle production in Northwest Arkansas.

At sales in the first week of 2019, Gadberry said, calves that bore the mark of the preconditioning program fetched an average of $34 more per head at sale, compared to non-preconditioned calves. Weaned calves at auction typically weigh between 450-550 pounds, with current prices at about $1.76 per pound.

Gadberry said the program is also trying to spread the sale of the preconditioned calves across state lines, working to attract the attention of stockyards in Oklahoma City and Joplin, Missouri, among others.

“We’ve communicated with our bordering states,” Gadberry said,” and we’ve seen quite a few of our green-tag cattle go those directions.”

Costs to participate in the program include a $10 ranch enrollment fee for three years, and a $2 qualifying fee per calf.

Gadberry said the BQA classes will be taught throughout the spring, and again in the fall. To learn more about the online BQA certification, visit www.bqa.org. To earn a BQA certification in a classroom-based environment, contact your local Cooperative Extension Service agent.