By Mary Hightower
U of A System Division of Agriculture
March 8, 2019

STUTTGART, Ark. – For many Arkansas farms, whether row crop or livestock, the view is the same: water, mud and more water. 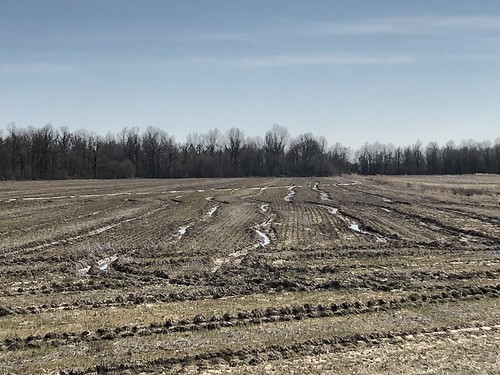 “With many areas still struggling to dry out from wet weather over the past couple of months, there isn't much good news over the next week,” the National Weather Service at Little Rock said on Friday. “Rainfall amounts could exceed 3 inches across the southeastern half of the state through Thursday, March 14.”

Jarrod Hardke, extension rice agronomist for the University of Arkansas System Division of Agriculture, talked about his visit Thursday with a grower who had watched the evening news with his wife.

“When he saw the 5 p.m. forecast and saw the four-plus inches of rain, he said ‘All I could do is start laughing. My wife looked at me and said, that’s all you can do,’” Hardke said of the farmer.

“It’s so ridiculous at this point,” Hardke said.

The additional water will further mire row crop field work and commodity shipping and add to the worries of livestock producers who fear for the health of their cattle, said extension specialists with the Division of Agriculture.

“For some producers, it’s too muddy to drive the truck and trailer to the corral to get cattle to market,” Gadberry said. “We’re running out of hay and need pastures to start growing to fill the gap. Excess ground moisture and cold cloudy days are holding back growth of our spring grasses.”

Arkansas’ rice and corn growers are seeing their planting dates delayed by rain yet again.

The incoming rounds of rain are “just about going to run us into March 15, when we would be sitting on go,” Hardke said. “We’re going to hit the theoretical starting gate without ground being ready.

“The prevailing condition is a lot of ruts and a lot of field work to be done,” he said. “There’s a small percentage of fields that were harvested before the remains of Tropical Storm Gordon showed up are largely rut-free. These can be no-tilled or gotten into quickly.”

The sluggish Gordon wandered around Arkansas for several days in early September 2018, bringing plenty of moisture.

Since Gordon, Arkansas has seen 40 inches of rain at Little Rock’s Adams Field, approaching the typical annual rainfall of about 49 inches.

The rain from the last few weeks has caused the Mississippi, White, Black and Cache rivers to sprawl from their banks, prompting flood warnings.

“Beyond farming, there’s been no barge traffic going through the Mississippi down to the Gulf of Mexico,” Hardke said. “If we get this much rain in the upper Delta, it’s all going to chase down the Mississippi.”

Jason Kelley, extension wheat and feed grains agronomist for the Division of Agriculture, said the small amount of the state’s winter wheat acres, which are near historic lows, may shrink further before harvest. Winter wheat is planted after fall harvested crops and is usually ready to harvest in June.

“What’s out there right now is that some of these acres are getting smaller each day because the Mississippi River is backing up” into its tributaries, Kelley said. “That may cause some abandonment because the wheat is going to be drowned or have water on it too long.

“Farmers are trying to get it fertilized right now too, but it’s too wet,” he said.