(Newsrooms: with art at https://flic.kr/p/2gheyqn)

FAYETTEVILLE, Ark. – John Marcy, extension poultry processing specialist and professor at the Center of Excellence for Poultry Science, has been named the 2019 Industry Leader of the Year by The Poultry Federation.

Marcy is well recognized on a national level within the food industry and “is one of TPF’s ‘go-to-persons’ when we begin planning the Food Safety Conference, the Live and Processing Symposium or any other educational program we sponsor,” said Marvin Childers, president of The Poultry Federation. “I have never received a ‘no,’ when we ask him to help the federation or anyone else in the poultry industry.” 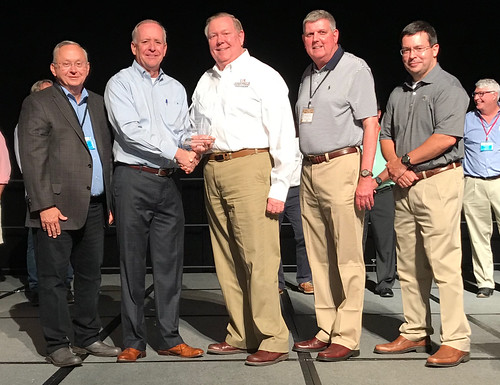 RECOGNITION - Marvin Childers, president of The Poultry Federation, shakes hands with John Marcy (white shirt), as Marcy was named the Industry Leader of the Year by TPF for 2019. (Photo by Samantha Beitia)

Marcy said the honor was humbling and showed the industry’s appreciation for education and professional development.

“It is a huge honor for an educator to be recognized by an industry group, especially one as large as the poultry and egg industry with many extraordinary leaders, for contributing to their success over a career in public service,” Marcy said.

Mike Kidd, head of the poultry science department and director of the Center for Excellence for Poultry Science said “Dr. Marcy has done an exceptional job in poultry extension efforts to improve efficiencies and food safety with poultry processors. Further, he is one of the best in linking scientific exchanges between industry, scientists, and government, where he has greatly aided The Poultry Federation meetings and the poultry industry.”

TPF has presented this award since 1955 to recognize the outstanding achievements of poultry and egg executives and their contribution to the industry. Childers and the TPF board presented the award June 14 during the 60th annual Poultry Festival. The Poultry Federation is the industry organization for Arkansas, Missouri, and Oklahoma.

Marcy joined the University of Arkansas System Division of Agriculture in 1993. He’s known in the industry for his work in hazard analysis and critical control points, better known as HACCP. He leads HACCP workshops for meat and poultry processing personnel, and has hosted an industry/regulatory/academia HACCP Roundtable quarterly since 1997. HACCP has its roots in the space program of the 1960s, when NASA wanted to be sure the food brought aboard its ships wouldn’t poison the astronauts.

Marcy served four years on the National Advisory Committee for Meat and Poultry Inspection and is an integral part of the University of Arkansas online Master’s program in Food Safety.

Marcy graduated with a Bachelor of Science in Food Technology and Science from the University of Tennessee and earned his M.S and Ph.D. in Food Technology from Iowa State University.  He has been a Director of Quality Control for Portion-Trol Foods, worked in production management and quality assurance for Swift & Co. and Jerome Foods, and has been an assistant professor and extension food scientist at Virginia Tech.  He was made a Fellow in the Institute of Food Technologists in 2009.

The Center of Excellence for Poultry Science is part of the University of Arkansas System Division of Agriculture.

The poultry science department and the Center of Excellence for Poultry Science include a complex of teaching, research and extension facilities at the Arkansas Agricultural Research and Extension Center and the John W. Tyson Poultry Science Building on campus. The department provides the curriculum for bachelor's, master's and doctoral degree programs.