By Ryan McGeeney
U of A System Division of Agriculture
@Ryan_McG44
June 12, 2019

LITTLE ROCK — Arkansans are advised to steer clear of flood-displaced wildlife, since those animals are likely to be stressed and more apt to act to protect themselves. 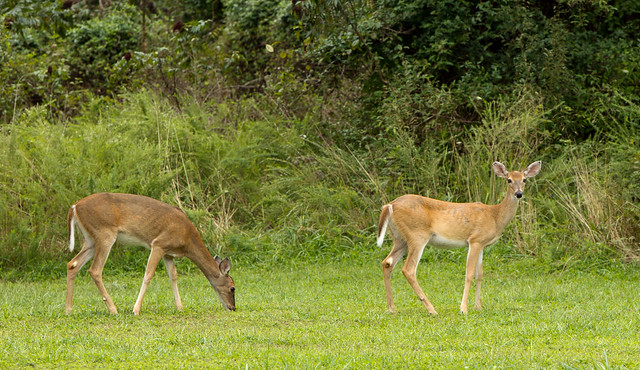 Becky McPeake, extension wildlife specialist for the University of Arkansas System Division of Agriculture, said animals are essentially doing the same thing as their human counterparts in such situations: seeking higher ground.

“Like people, wildlife is fleeing from floodwaters in order to survive,” McPeake said. “Some are adept at swimming, others are not.”

While McPeake said she was not aware of widespread reports of wildlife making their way into built-up urban or suburban areas across the state, residents living in more rural areas — especially those in or near flood plains — are reasonably likely to encounter wildlife on the move in flooded conditions.

“The best advice is to steer clear of wildlife which are fleeing from a flood,” she said. “Typically, wildlife in flight will be stressed. Some may be weak or famished, or irritated with being displaced.”

Venomous snakes may pose an acute risk in these circumstances, McPeake said.

“A snake that senses it is in danger may strike at you,” she said. “Alligators and other animals are the same way — once flushed from their normal habitat, they’re going to do what it takes to protect themselves and survive.”

McPeake recommended residents download the free Division of Agriculture publication, “Encountering Native Snakes in Arkansas,” which discusses both venomous and nonvenomous snakes commonly found in Arkansas, how to avoid injury, and what to be do in the event of a snakebite.

The publication can be read and downloaded at http://bit.ly/2EYbdMX.

McPeake said flooded circumstances may, however, present unique opportunities for residents to rid their properties of unwanted nuisance animals.

“Oftentimes, feral hogs move to high spots during flood events. Now is actually a good time to remove them,” she said. “Sometimes groups of feral hogs will congregate on an island of dry ground. Flooding pushes them from their normal hideaways, making them easier to spot and remove.”

“Other times of the year, they will be concealed in brush and thickets along rivers. In flood conditions, they travel to higher ground, where they’re more visible,” she said.

Small and less hazardous nuisance animals can be collected with live traps, and removed by local animal control authorities, or residents themselves. Arkansans should still exercise caution, she said.

“Most animals are going to resist capture — it’s an instinct,” McPeake said. “If it is necessary to capture an animal with the intent of releasing it elsewhere, check local laws, and also the Arkansas Game and Fish Commission website for state laws regarding trapping nuisance wildlife. Consider calling an animal control specialist to handle the problem.”

Additional information on flood and disaster recovery from the Division of Agriculture can be found at http://bit.ly/2F4AFjJ.