By David Bennett
The U of A System Division of Agriculture
June 10, 2019

LONOKE, Ark. – Arkansas farmers besieged by floodwaters, rain-filled forecasts and sprouting weeds are seeing another threat crawling toward their valuable crops in the form of numerous, hungry pests. 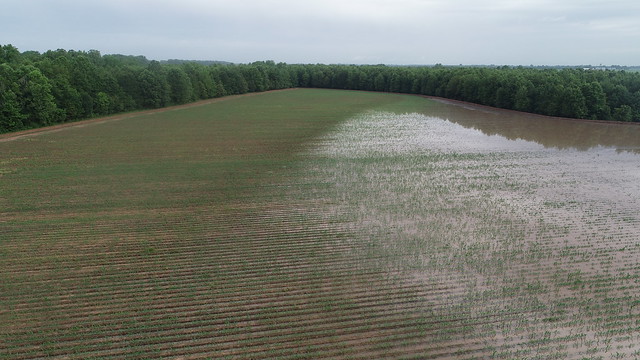 “This has been one of the lightest thrips we’ve experienced in a long time,” said Gus Lorenz, extension entomologist for the University of Arkansas System Division of Agriculture. “In fact, in my career, I’ve never seen thrips as light, particularly in cotton planted in late April or the first of May.

“On the other hand, we have had some problems behind some cover crops and corn where there was a lot of crop debris left behind from the previous year. Slugs were bad in a lot of the state. A lot of that had to do with the moisture and cool weather. They caused some stand loss in some fields – particularly in cotton and soybeans.

“This has been one of the toughest years to get a stand in lots of fields we’ve seen and in our plots. There’s just been a lot of rainfall and it’s been a struggle in that respect.”

Some of the later-planted cotton is coming up now and Lorenz and colleagues are getting a few thrips calls. “But it doesn’t appear to anything out of the ordinary.

“There’s a lot of early-planted cotton that’s around nine- to 10-nodes and there’s some plant bug movement. We noticed early in the spring when we were sweeping weeds at the edge of fields the numbers of tarnished plant bug numbers appeared to be extremely high. That leads me to believe we’ll have to deal with plant bugs for the rest of the year.”

Lorenz had a word of caution: don’t rush and treat until necessary. “I’d be very cautious about making applications too early. Even though it’s been a wet year there are some secondary pests like aphids and spider mites we’re picking up in our samples. I’m getting calls on aphids building in some of the cotton – three-, four- and five-leaf – and you want to be really cautious not to flare aphids by making unnecessary applications.”

In the state’s soybean crop, “we’re also seeing pretty high numbers in our bollworm traps – moth counts are high for this time of year,” said Lorenz. “We started running traps in mid-May and it seems we’re getting some migration from the south. It appears bollworms could be a problem for us in both cotton and soybeans. We’re beginning to pick up a few bollworm larvae in some of the early-planted soybeans.”

“We were finding adult red-banded stinkbugs in the state early. That told us they overwintered and survived in the south part of Arkansas. Look a little farther south in Louisiana and their red-banded numbers are already beginning to increase. I’m afraid that is bad news for our southern tier of Arkansas counties – Ashley, Chicot, Desha, Drew.”

In Lorenz’ rice plots, and in phone calls he’s getting from producers and consultants, “rice water weevil adult activity is extremely high – much higher than average for this time for year – in much of the rice-growing region of the state. We’re at the stage in our crop where we’re going to flood and we’re seeing a lot of movement of rice weevil adults moving in. The flood is what triggers them to come into the fields.”

Everyone with rice going to flood needs to check their crop for rice water weevil adults and scarring.

What is the explanation for these pest problems?

“The biggest issue with the rains and flooding is we’ve got late crops,” said Lorenz. “The problems associated with late crops definitely include insect pressure. That’s particularly true with soybeans – that’s the crop we’re furthest behind in. By planting late, it allows insects to build up numbers and the bulk of our soybeans are in that situation. The stinkbugs, bollworms, loopers and all the pests, the later you plant the more exposure you have.

“I don’t think the flooding has anything to do with the weevil numbers. I think the reason we’re seeing so much activity so early is the mild winter we had. There was a lot of overwintering survival of insects and that meant a larger number starting the growing season. Add in late-planted crops and we’re set up for a tough 2019. Producers don’t need the added expense of dealing with insects but it looks like that’s where we’re headed.”