By David Bennett
The U of A System Division of Agriculture
June 7, 2019

McGEHEE, Ark. – Plastic tubing, often used to bring water into farm fields, is now being used to help keep flood water out of homes and roadways. 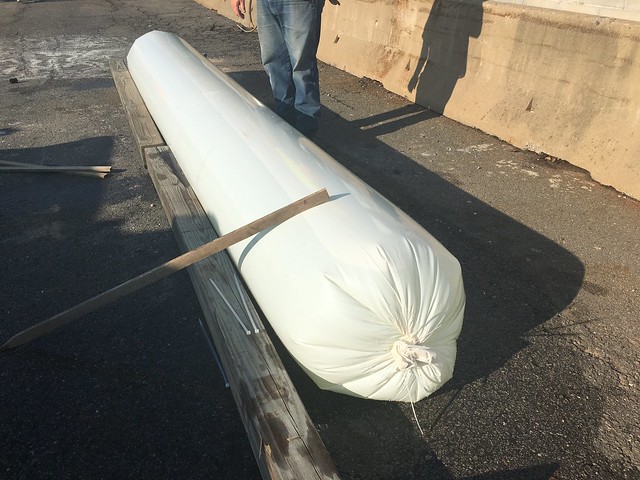 Those who have tried using the pipe – ubiquitous in Arkansas row-crop country during the growing season – have had mixed results.

How did John David Farabough, Desha County extension agent for the University of Arkansas System Division of Agriculture come across the idea for using plastic irrigation pipe as a flood barrier?

“It’s been done, or tried, for quite a while with a bunch of people. I don’t think it’s been advertised much, though,” said Farabough. “Actually, there is a resident of McGehee, Nathan Bailey, who has developed a (rolled) pipe product to use in protecting houses in flooding conditions. The name of the system is the ‘Dam Right,’ and folks were trying various versions of the idea before the company patented its approach.”

[See a local media report on the product in action at http://bit.ly/2ZiZWyx]

What’s been tried before is rolling the pipe around a home or property.

“They typically do it just like irrigation – tie off the ends,” said Farabough. “Or, some connect two ends of the pipe to a ‘T’ and fill it from the top. That means you have a continuous ring around the property. Using the ‘tied-ends’ system, you have an overlap where water can get through much easier. However you set the pipe up, it’ll fit the contour of the land. Of course, there will always be some water that’s able to seep through under the pipe.”

As for Farabough’s situation, “we’ve actually put the pipe around a home we have on Douglas Lake. The river is backing up into the lake, which is predicted to come towards the house. So, we put the pipe down and then put some sandbags on the backside to keep the pipe from moving. We don’t want any of the pipe to float like bottles in an ice chest. If there are any buoyancy issues there needs to be something behind to hold it firm.”

Farabough said “we’ve been watching the water rise around that house for the last week. To give you an idea of what’s happening, there was a ‘posted’ sign on a tree for a fishing spot. This morning, the posted sign was underwater. It was a couple of feet above the waterline last week.

“So, we did this with the pipe just to try and help,” he said. “The flood is predicted to be two feet inside the house and we’re obviously hoping the water level doesn’t get that high. But we’re trying to take precautions.”

Unfortunately, the pipe didn’t work so well keeping floodwaters off of a central Arkansas highway.

“We tried to use the pipe and, long story short, it was a failure,” said Danny Straessle, Arkansas Department of Transportation public information officer. “Basically, we had a flooded highway – state highway 300, about 3,500 vehicles a day – near Roland in central Arkansas. We put that pipe down, filled it with water and a couple of things happened.”

One element hampering the effort was a slight slope from one side of the highway to another. “So, it wasn’t a level area,” said Straessle. “We tried putting sandbags behind the pipe but it kept rolling up and over the sandbags. Also, the longer it stayed out there the more punctures it received. It’s quite a different environment on the side of a state highway as opposed to an agriculture application. In our case, there’s debris in the water, and rocks and sharp objects along the highway, the grit.

“So, it didn’t work as well as we’d hoped. I don’t know if we’ll rule it out entirely but, unfortunately, our first attempt didn’t work as well as we’d hoped. We were hoping to install the pipes, pump out any water on the highway and keep the water on either side of the road. The water was about a foot deep when we tried it. We just couldn’t control the movement because it was on a slope.”

Back in Desha County, the water was still rising.

“There are some roads being closed to keep people out because the water is getting so deep,” said Farabough.

Just outside Desha County, Arkansas Post is set to close down the roads into the park to keep people safe. Water continues to rise steadily and folks are scrambling to try and protect what they can. For others, it’s too late and the water is only going to get deeper.

“We’re not supposed to see the water’s peak until late this week. Here, everyone is hoping nothing breaks above us to allow a giant rush of water,” Farabough said. “There’s enough coming in the river. We don’t want any of the levees to be breached.”