By Ryan McGeeney
U of A System Division of Agriculture
@Ryan_McG44
June 7, 2019

JONESBORO, Ark. — Arkansas may soon see its biggest year in peanut production since the U.S. Department of Agriculture began tracking  the crop in the state in 2015, as respond to anticipated new buying points and a shelling facility within the next year. 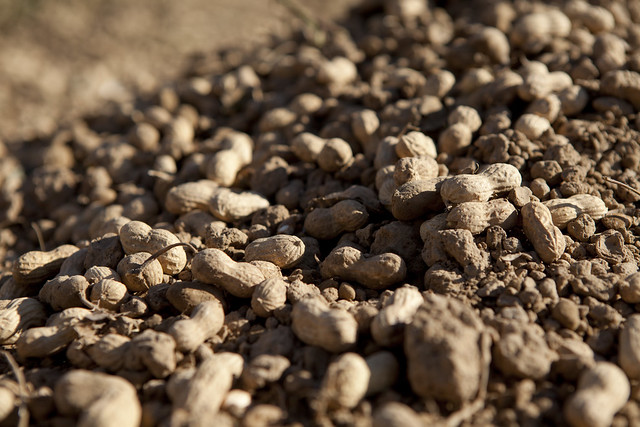 Travis Faske, extension plant pathologist and peanut agronomist for the University of Arkansas System Division of Agriculture, said peanut acres in the state are approaching 35,000 this year, based on conversations with growers in the state as of May.

In February, Faske had estimated a statewide peanut acreage of about 25,000 acres, but adjusted his projection upward as growers began responding to the formation of Delta Peanut, LLC, a cooperative of about 60 peanut farmers, based in Jonesboro. The cooperative is working toward establishing two to three buying points at locations including Marianna and Jonesboro, he said.

“Birdsong’s still here, and Golden still has a very small footprint in Arkansas,” Faske said, referencing two major purchasers of Arkansas peanuts. “But those companies are housed in other states. Any peanuts they buy here are going to have a significant shipping cost associated with them, so contracts are always going to be pretty limited.”

Tommy Jumper is Delta Peanut’s executive officer, according to filings with the Securities and Exchange Commission. Jumper, a resident of Paragould, Arkansas, retired from Jimmy Sanders, Inc. in 2009, after a 25-year career with the agriculture chemical and supply company. After discovering that retirement didn’t suit him, he began looking for ways to help Arkansas peanut growers vertically integrate their business model — something he’d frequently seen in Georgia and other major peanut-producing states.

“I knew we had a lot of components in place,” Jumper said. “We had good lands, suitable for peanut production, abundant irrigation; and a close proximity to several of the major peanut buyers in the world.”

Jumper noted that two of the country’s major peanut butter manufacturers, Skippy and Jif, are located in Little Rock and Memphis, respectively. Several other confectionary food producers that incorporate peanuts, including Mars Candy, are based in Arkansas as well.

“My neighbors would grow peanuts, then haul them to the buying point in Portia or Pocahontas,” he said. “Then the peanuts would leave there and either go to west Texas or south Georgia, where they shell them. That’s $75 a ton worth of freight costs, to get them to the shelling plant. And then lots of those peanuts were coming back to places like Memphis and Little Rock.”

The venture has raised about $28 million in equity, Jumper said. He said he believes the cooperative will have at least two buying points ready to accept the fall peanut harvest by Oct. 1, and further plans to have a new shelling facility operational in the Jonesboro area by March 2020, with a capacity upwards of 180,000 tons — about twice the anticipated capacity of the state’s current peanut crop.

Jumper said he thinks bringing more of the production chain “in house” for Arkansas peanut growers will lead to an expansion of the crop.

“We’re going about this very intentionally,” he said. “We’re moving a segment of our agriculture from the production of a commodity to the production of a food ingredient. The other thing we’re doing is creating one of the few opportunities for growers to vertically integrate and enjoy both the farm-gate margin, and the margin from the processing of that food ingredient. We seem to be very well received by major food brads who are already willing to do business with us.

“We’re anticipating, over the next 3-5 years, for our acres to double where they are today,” he said.

Faske said the cooperative may also enjoy some luck in the larger peanut market, given agricultural conditions in other peanut-producing states.

“This may be a really good year for this to happen, because peanuts may be short, given all the drought issues in Georgia, which plants about 700,000 acres,” Faske said. “You add the Carolinas and Virginia, Alabama area, that’s a significant amount. So, the timing on this may be really good.”