Seep water from the Mississippi leaves farmers months behind 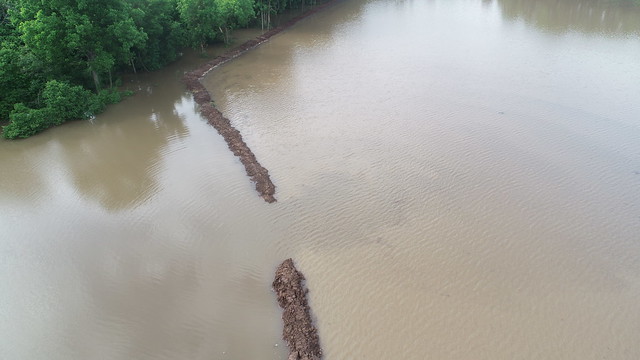 The area has been affected since April, Goodson said.

The high water is more than just the Mississippi leaving its banks. The river water is soaking through the soil that makes up Arkansas’ delta growing region, penetrating the  Mississippi River Valley alluvial aquifer that underlays parts of eastern Arkansas, southeast Missouri, northeastern Louisiana, western Tennessee and western Mississippi.

This water source has been critical for Arkansas agriculture. In 2000 alone, an estimated 34 billion liters of water a day was withdrawn from the aquifer.

Farmers have relied on it for decades to provide irrigation – giving water when the pumps go one.

Since the Mississippi River has been swelling, Goodson and others have found, that water is coming up those pumps unbidden, as the Mississippi River waters put pressure on underground supplies. The water has to go somewhere, and the holes punched through the soil for the wells provides an easy outlet.

This “seep water” comes up through the ground when the Mississippi River is high, and it will not drain because there is no place for it to go, Goodson said.

Around 20,000 to 40,000 acres are affected, he said. The areas affected are on the left side of the levee, in the east side of Phillips County.

“The larger volume of water increases the height of the water in the river,” said Jeannie Barlow, assistant director for water availability and use studies at the U.S. Geological Survey Lower Mississippi-Gulf Water Science Center. “As that height goes up, we  see the river levels go up, and it is moving steadily into the aquifer.”

Water flows downhill and the river level is higher than the aquifer, meaning the water has to go somewhere, Barlow said.

It’s fairly common in areas where the soil along the bank is more prone to seepage, said James Pogue, a spokesman for the Memphis District of the U.S. Army Corps of Engineers.

The increased water levels also have the potential to create sand boils, where the water pressure boils up to the surface in a pool of sand and water.

With the river levels going down, the boils are not likely, Goodson said.

Farmers are unable to work the wet fields and they are falling behind schedule.

“The water most definitely puts farmers behind. For some it is almost as much as two months,” Goodson said. “All they can do is wait for the river to go down.”

Prevented planting insurance claims may be an option for farmers who are not able to get into their fields, Goodson said.

“We don’t fully understand what the impact of this flooding will be yet, the effects differ from place to place,” Barlow said.

The Mississippi River at Helena was expected to crest June 13 at 40.5 feet, above the 40 foot flood stage. (See forecasts at: https://water.weather.gov/ahps2/hydrograph.php?gage=heea4&wfo=meg.)