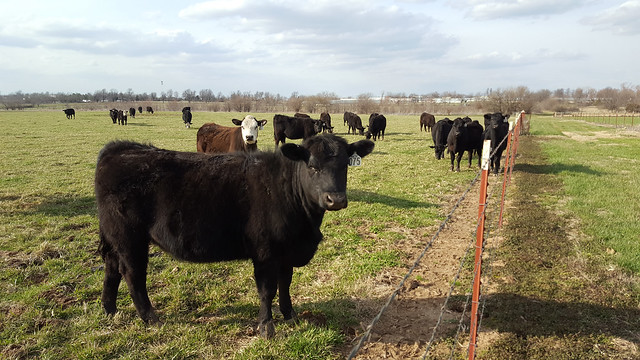 “Cattle producers along the river deal with occasional flooding,” said Shane Gadberry, professor-ruminant nutrition for the University of Arkansas System Division of Agriculture. “What makes this different is record flooding reaching into areas where flooding is more rare.”

Floods have the potential to expose cattle to organisms from upstream soils, animals swept away by flood water and industrial contaminants, not to mention what can come out of flooded sewers, Gadberry said.

Bacterial diseases such as leptospirosis become a heightened threat to livestock and is transmitted by drinking water contaminated by urine, assistant animal science professor and Extension veterinarian Heidi Ward said.

All animals can contract leptospirosis, as well as humans, according to the Center for Disease Control and Prevention website.

Flooding can also increase the danger of blackleg, a fatal disease caused by the Clostridium chauvoei bacterium. Blackleg symptoms include lameness, depression and fever, but most cases result in sudden death – meaning treatment is useless. Veterinarians recommend vaccinating all calves, as well as vaccinating cows to ensure good maternal transfer for the next calf.

Flood waters can also spread weeds that can be toxic to cattle. Plants such as water hemlock can cause seizures, and perilla mint can cause severe sudden lung disease, Ward said.

“Water hemlock is normally found adjacent to streams, and perilla mint under trees,” Ward said. “If they manage to grow in the pasture, livestock are more likely to eat it.”

Toxins in floodwater, such as gasoline or industrial chemicals, can also be an issue. These can cause skin irritation, and if ingested, can cause a multitude of symptoms including death, Ward said.

Water with an oily appearance can be a sign of contamination, Gadberry said.

It is important to monitor cattle body conditions while waters are high.

Another threat to cattle during floods is “hardware disease,” caused by the ingestion of foreign objects. The livestock can come into contact with objects such as wires, nails and hard plastics

that have been transported to pastures via floodwater.

“The foreign objects can cause problems weeks or even months after ingestion by damaging the digestive tract or vital organs,” Ward said.

These floodwater remnants can cause additional issues for cattle. When waters recede, pockets of these new waters may remain along with the silt and contaminants they brought in, Gadberry said.

“If a lot of new silt material has settled into a drinking area, there could be added risk of livestock getting stuck trying to access water or wading to cool in the summer heat,” Gadberry said. “This can negatively affect water consumption, food intake, and body condition maintenance.”