CLANTON, Ala. — Mark Knight wasn’t even considering entering a white-fleshed peach in the Chilton County Peach Festival contest in Alabama this year. His daughters talked him into it. 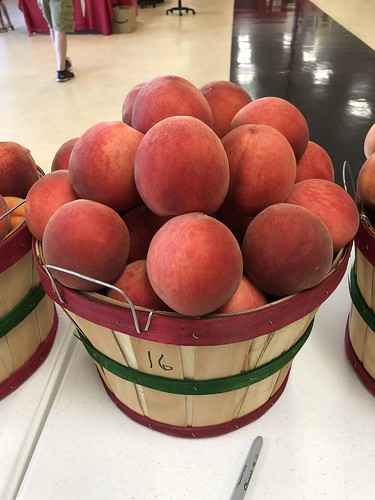 Knight had harvested some White County peaches, a variety developed in the University of Arkansas System Division of Agriculture fruit breeding program, that looked good on the morning of June 29, the day of the contest. But they were only one of several varieties he was considering for his entry. He was leaning toward an Alabama yellow peach, because it was bigger, when his older daughter, Andrea Williams, objected.

“She said, ‘Dad, I’m just going to go with that one right there,’” Knight said. She was pointing to the White County peaches. “She told me, ‘It’s just too pretty.’”

Knight does know what he’s talking about. M and M Farms, which he runs with his wife, Melissa, and their two daughters, has about 50 acres in peaches, nectarines, plums and a couple rows of blackberries in Alabama’s premier peach-growing region. He has been entering the Chilton County Peach Festival contest for years and, though he hasn’t won more contests than some of the more senior peach growers, he has the record for the most consecutive wins.

Those blackberries, by the way, are Arkansas varieties from the Division of Agriculture’s fruit breeding program. “You guys got it going on with blackberries,” Knight said.

Knight planted his first peach trees in 2003 and harvested his first peaches in 2006. Most of his peaches are yellow-fleshed — he only has about 30 trees in white peaches. White County shines among those, he said, because it’s a reliable producer with healthy trees.

Nevertheless, Knight had a few doubts about entering White County in Alabama’s top peach contest. First, white peaches just didn’t have a very good record in the Chilton County Peach Festival contest. Only two white peaches had ever won in the festival’s 60-70 year history, and the last one was about three or four years ago. White, low acid peaches just don’t have the consumer following in Alabama that is enjoyed by traditional tangy, yellow-fleshed peaches, and he didn’t think another white peach stood a chance of winning again so soon.

Also, it wasn’t an Alabama peach. It wasn’t even a neighborly Georgia peach. This usurper came from Arkansas, way over on the wrong side of the Mississippi River.

White County was released by the Division of Agriculture fruit breeding program in 2004, said John Clark, Distinguished Professor and fruit breeder for the division’s Arkansas Agricultural Experiment Station. It is one of a series of white-flesh, low-acid, fresh market peaches to come out of the program that was begun in 1964 by James N. Moore, the division’s first fruit breeder.

“White County is an outstanding product with fabulous flavor in a reduced-acid peach,” Clark said. “It has a large size and attractive and healthy trees. It deserves to be grown more widely in Arkansas and beyond.

“I’m glad the folks in Alabama were able to use a product of our Arkansas fruit breeding program,” Clark said.

In the end, Knight bowed to his daughters’ wishes, and went with White County. He was glad he did.

“I fixed that basket for the contest in 10 minutes,” Knight said. “It usually takes about 20 minutes to make a basket of peaches look good for the judges.”

Knight thinks the basket was easy to arrange because the White County peaches were all about the same size. That consistency and reliability has sold him on the peach.

Most fruit growers in Chilton County — the peach capital of Alabama — are looking at greatly reduced harvests this year because of late freezes early in the growing season. Several nights of temperatures in the 20s took a huge bite out of most peach production. However, White County has thrived where other, more traditional Alabama peaches have suffered, he said.

When the judges announced their decision, Knight’s White County peaches took first place. “It was a surprise for me,” he said. “And I’m happy it was.”

“I didn’t know he was going to enter a white peach,” Knight said of his brother.

Margaret Worthington, Division of Agriculture fruit breeder who has been heading up the peach breeding program since 2016, said White County has made an excellent parent in crosses to develop new breeding lines.

“The peach season usually begins in June, when the earlier ripening fruit is harvested, through about late August,” Worthington said. “Each peach variety usually has about a two-week window when it’s ready for harvest.”

Worthington said one of her goals for the peach breeding program is to develop good quality white peach varieties that ripen earlier and later. “Nice firm, delicious white peaches that go earlier or later,” she said. “That would stretch out that harvest season for white peaches.”

Knight said he likes the firmness of White County’s flesh. That means the peaches hold up longer so he can get them to market and consumers can still keep them at home for a few days.

Knight usually sells his peaches in mall markets — a fresh market Alabama variation on farmers markets. When he has an abundant crop, he said, he picks some White County a little early, letting them ripen off the tree, and ships them to a wholesale market in Birmingham.

Developing firmer flesh peaches — both white and yellow — is one of the goals of the peach breeding program, Worthington said.

Worthington noted that the earliest peach varieties from the Arkansas breeding program were developed for an Arkansas canning industry that existed at the time. But James Moore changed direction in the 1990s, when canners declined in the state.

John Clark crossed White County with Souvenirs, a firm, yellow-flesh peach, cultivar from the Division of Agriculture fruit breeding program, to get a wide variety of firm and attractive yellow and white-fleshed progeny with maturity dates ranging from June to August.

Worthington said that new selections derived from that cross are in advanced testing now and are used as parents every year to make new breeding lines, some of which she hopes will yield new peaches for Arkansas fresh markets.

In the meantime, Arkansas peaches are leaving their mark on the markets.

Arkansas’ reputation gave him confidence to add White County to his peach orchards, he said. “We certainly wouldn’t put them in if they weren’t promising peaches.”