Ag Roundtable: Farmers need to diversify; reduce reliance on China as a customer

By Mary Hightower
U of A System Division of Agriculture
July 29, 2019

LONOKE, Ark.  – An agricultural roundtable on Monday presented two key takeaways for farmers: find ways to reduce their reliance on China as a market, and don’t count on Market Facilitation Program payments to become permanent. 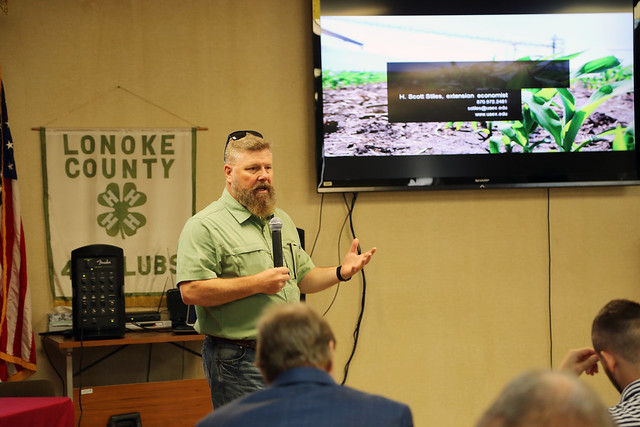 About three dozen people attended the round table at the Lonoke Extension Center, which featured an economic overview by Scott Stiles, extension economist for the University of Arkansas System Division of Agriculture, and a presentation by U.S. Rep. Rick Crawford.

Stiles explained that 2018 began with optimism about soybean prices, but a record crop in Brazil, compounded by China’s 25 percent tariffs on U.S. products, led to large ending stocks of soybeans and a drop in prices.

“U.S. carryover is starting to build. You are witnessing something historic here,” Stiles said. “The U.S. Department of Agriculture estimates just over a billion bushels. Ultimately, we could see that number go to 1.1 billion, maybe as soon as the August report comes in.”

Outbreaks of African swine fever — now reported in China, Cambodia, Vietnam and Europe — may reshape the world’s soybean markets even more than tariffs, however. The disease is incurable and has an almost 100 percent mortality rate. Stiles said one projection forecasts some 200 million pigs to be culled due to the disease.

“Culling is expected to reduce Chinese soybean demand up to 22 million tons, or 21 percent,” he said. “That could have more of an impact on soybean demand than the tariffs themselves.”

The bottom line, Stiles said, is that farmers have to ask themselves, “what can we do to diversify and be less reliant on China?” And it’s a long-haul game. “Some argue it may take many years to restore trade to China.”

Monday was the first day of the signup period for Market Facilitation Program payments (See: http://bit.ly/2GsEtvN), and while he said the 2018 MFP payments were great for filling gaps left by Agricultural Risk Coverage and Price Loss Coverage payments under the 2014 Farm Bill, Stiles urged caution: “Don’t expect MFP to become a permanent part of your cash flow.”

Crawford underscored Stiles’ points, saying MFP “is a Band-aid.” He said his office had received several calls about MFP, especially over the differences in county rates. However, he said that this year was “more fair than it was administered last year.”

The congressman also urged farmers to “be looking at ways to increase domestic consumption of our commodities.

“We need to diversify our portfolio, our crop mix. Relying on the Chinese marketplace to do business, you do at your own peril,” Crawford said, adding that other markets in Asia, such as Malaysia, India, Singapore and Vietnam were starting to look good.

The University of Arkansas System Division of Agriculture is an equal opportunity/equal access/affirmative action institution. If you require a reasonable accommodation to participate or need materials in another format, please contact the station at 501-671-2229 as soon as possible. Dial 711 for Arkansas Relay.