FAYETTEVILLE, Ark. – Rice, already a staple grain for billions around the planet, could become an even more important food source with additional nutrients. Researchers with the University of Arkansas System Division of Agriculture’s Rice Processing Program presented this, and other hopeful insights based upon their academic research at the Annual Industry Alliance Meeting. 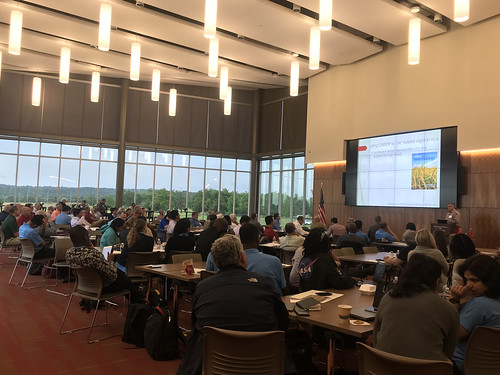 CRISPR — Ken Korth during his presentation on gene editing at the RIce Industry Alliance Meeting in May 2019. Korth spoke on Gene Editing: Current Progress and Outlook for Using CRISPR in Rice. (U of A System Division of Agriculture photo by Abbi Ross)

The 2019 meeting was organized and hosted by the Rice Processing Program, led by Terry Siebenmorgen, distinguished professor of food science. He said program researchers annually report on their work to sponsors and corporate partners.

“The Industry Alliance Meeting serves as a platform to provide research results to the companies that sponsor the Rice Processing Program,” Siebenmorgen said. “It is also a venue that brings together the rice processing industry to discuss and address current needs of the industry.”

This year's presentations included research in evaluating production methods, grain drying and processing techniques in which rice can improve nutrition and/or consumer acceptance.

Ken Korth, head for the department of entomology and plant pathology, also presented at the meeting. Korth presented on using CRISPR technology for gene editing in rice and how the technology differs from traditional breeding.

“With traditional breeding, you put out plots of plants and look for the phenotype that you are interested in,” Korth said. Modern gene editing allows you to make very precise changes in the genome, he said.

“The rice genome has about 430 million base pairs in every cell,” Korth said. “We can go in, select one out of those millions, and change it however we want. It is incredibly powerful.”

The technology is a game-changer, especially in the world of agriculture and plant breeding, he said.

“In a broad sense, it’s a game changer in terms of accuracy, and how breeders can select genes and the changes in genes that they want,” Korth said.

For more information about the Rice Processing Program, visit https://uarpp.uark.edu.