By Mary Hightower
U of a System Division of Agriculture
July 25, 2019 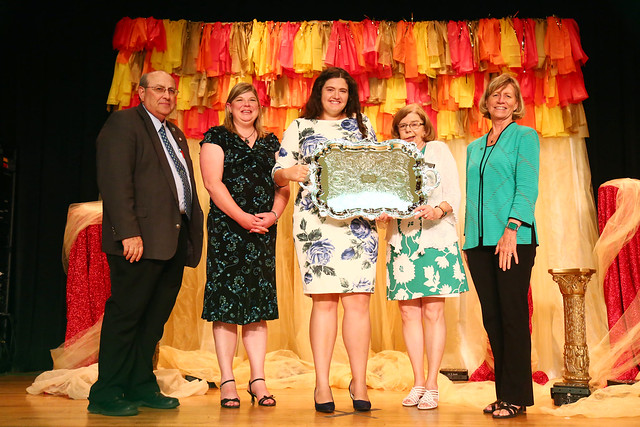 The honor was bestowed during a ceremony during Arkansas 4-H State O-Rama. Burnett was one of four finalists for this award following a very demanding application and interview process. Following their interviews, the finalists were hosted for lunch by Gov. Asa Hutchinson and his wife, Susan.

This spring, she was selected as the 2019 inductee to the Arkansas 4-H Hall of Fame. She is majoring in agriculture business, with an emphasis on pre-law at the University of Arkansas. Among her many achievements, Burnett represented Arkansas in national competitions seven times; was a state 4-H ambassador, and an Arkansas 4-H State Officer at Large. She has been self-employed since 2010, raising and selling dairy goats, dairy cattle and commercial swine. In 2018, Burnett took part in “Adopt A US Soldier,” sending weekly letters and monthly packages to a service member and has encouraged others in her club to do the same. “Supporting those who sacrifice so much for us not extra, it should be necessary.”

“We want to thank our judges, donors, and Gov. and Mrs. Hutchinson, for their efforts in support of this award,” Freel said. “Every year the judges tell me how difficult it is to select an overall winner for this award,” said Angie Freel, interim director for the Arkansas 4-H program. “All of our finalists are 4-H’ers of the highest caliber.”

This year’s finalists were Lane Fritch of Hiwasse, Katie Gardner of Fayetteville and Caleb Swears of Carlisle.

To learn about 4-H and other extension programs in Arkansas, contact your local Cooperative Extension Service agent or visit www.uaex.uada.edu. Follow us on Twitter at @Arkansas4H.